A mother has smiled for the first time in nearly 20 years after doctors removed a massive tumour from her face and rebuilt her jaw from her pelvis.

Isatu, whose second name is unknown, first developed a lump on her jaw when she was just 10 years old, with it soon taking over one side of her face.

She struggled to breathe for years due to the tumour, known as an ameloblastoma,  pushing her tongue into her throat.

The 27-year-old was also often reduced to tears due to cruel strangers ‘making fun’ of her looks.

Desperate, she trekked 200 miles (321km) from her home in Sierra Leone to Guinea where the hospital boat Mercy Ships was docked.

Isatu then endured three operations to have her tumour removed, her jaw replaced and her skin smoothed in a cosmetic procedure.

Once over, her family reportedly immediately commented on Isatu’s ‘beautiful smile’. 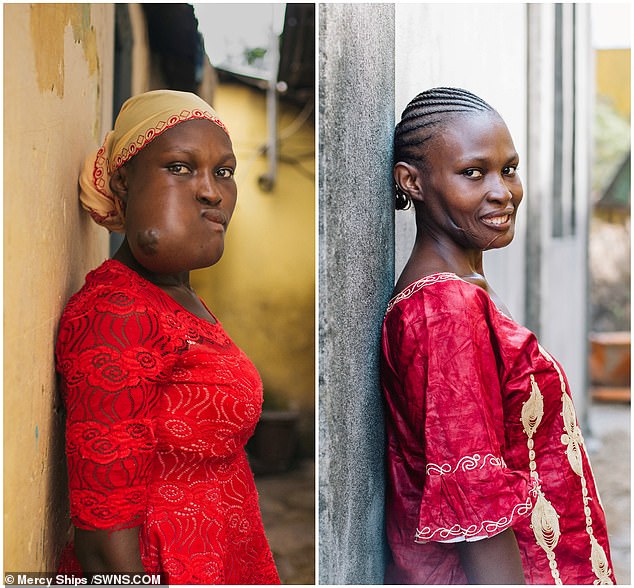 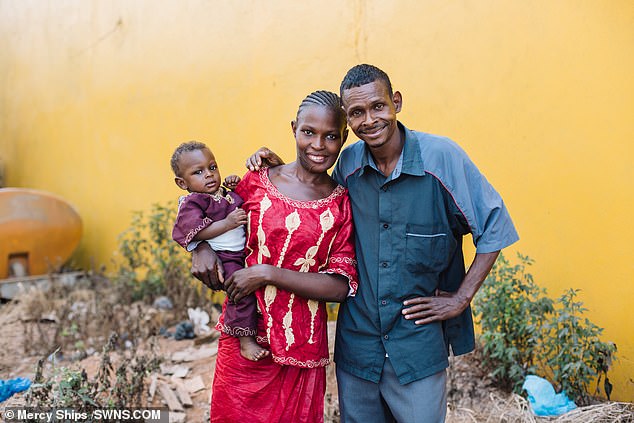 Isatu (pictured with her baby son and another relative) endured three surgeries to remove her tumour, replace her jaw with a bone graft and smooth out her skin in a cosmetic procedure

Speaking of life before the surgery, Isatu said: ‘When I’m walking, I cover my face because when people see me they talk.

‘They make fun of me. So when they talk, I’m ashamed. They make me cry.’

Desperate, Isatu took it upon herself to finally get treatment. She had heard about Mercy Ships providing medical care for poor people in Guinea.

Since the charity was founded in 1978, it has worked in more than 70 countries, helping over 2.7 million people for free.

Isatu traveled to Guinea’s capital city Conakry with her sister-in-law and baby son for help.

After meeting with the patient-selection team, she was approved for surgery.

Dr Gary Parker, head of maxillofacial surgery on the ship, said tumours like Isatu’s ‘are usually benign and not cancerous, but you can die’.

He added: ‘You can suffocate to death because the tumour pushes your tongue back into your throat until you can no longer keep your airway open.’

Due to the size and location of Isatu’s tumour, she had to undergo three surgeries to remove the cancer, rebuild her jaw and smooth out her skin.

The procedure to remove the mass took place in September and lasted five hours. Isatu was then fitted with a titanium jaw. 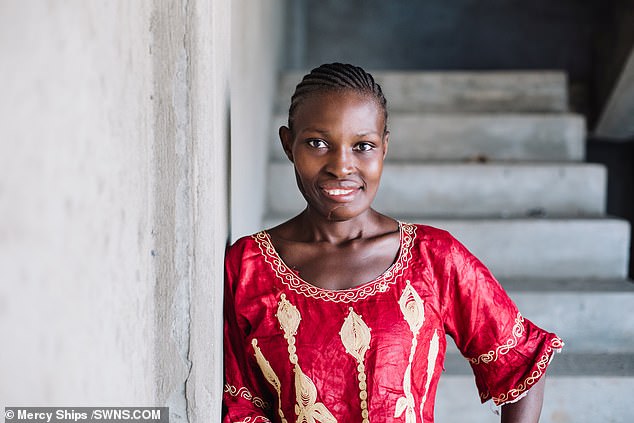 After the surgery, her family immediately commented on her ‘beautiful smile’

‘As she looked at her reflection, her expression was one of awe,’ Ms Scmaleberg said.

‘It was as if she could see into a whole new future. And despite the swelling from the surgery, her smile still shone through.

‘To see that from someone who walked in so quiet and timid and afraid, who is now fully herself, it’s like seeing a new person be born.’

Three months later, Isatu returned to the theatre to have her titanium implant replaced with a permanent bone-grafted jaw taken from her iliac crest – a bone in the pelvis.

Earlier this year, she went under the knife for the third and final time for plastic surgery to smooth out the excess skin left by the amenoblastoma’s removal.

Throughout her treatment, volunteer nurses stayed by her side and helped care for her son. 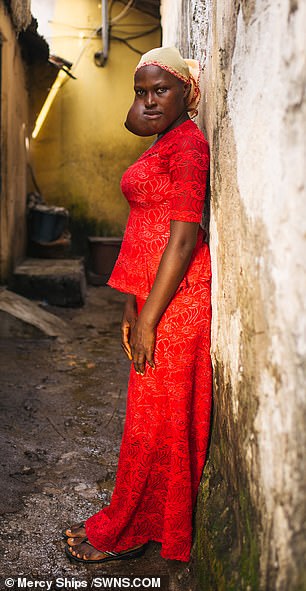 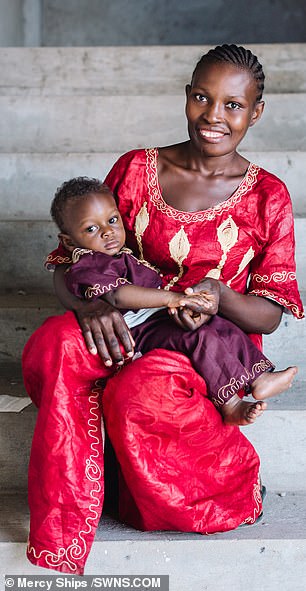 Isatu was often reduced to tears due to cruel strangers ‘making fun’ of her looks (left). After her first surgery, the mother-of-four (seen right with her son) looked at her reflection with ‘awe’ 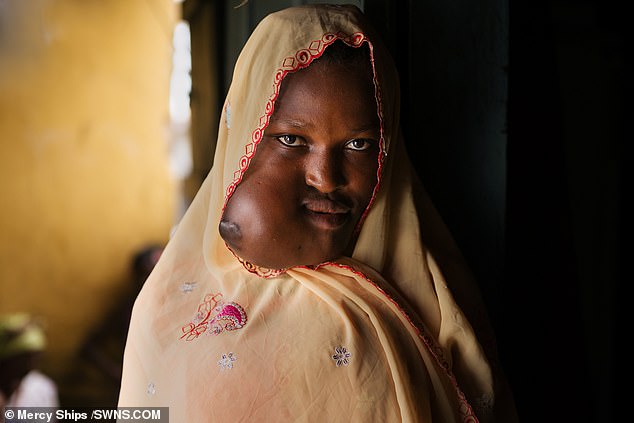 Isatu lived with the tumour for almost two decades, with the mass causing her to lose teeth

Ameloblastoma is a rare, usually benign, tumour that affects the jaw. The tissues involved are typically those which teeth grow from, therefore facial distortion is common.

Only one per cent of mouth tumours are ameloblastomas. Separate figures show mouth cancer affects 6,800 people a year in the UK and up to 51,540 in the US.

In extreme cases, the growth can also affect the nose, sinuses and eye sockets. In less than two per cent of incidences, ameloblastomas can become cancerous and spread, particularly to the lungs.

As well as an abnormal growth in the jaw, other symptoms may include:

Ameloblastomas’ cause is unclear but may involve a combination of genetics and:

The lower jaw is affected in 80 per cent of cases.

Treatment is usually surgery to remove the affected tissue, as well as some of the healthy tissue to prevent the tumour regrowing.

The tumour reappears in up to 72 per cent of cases if all of the affected tissue is not removed.

If the tumour has spread, radiotherapy is often required, with chemo being less effective.

Laboratory monkeys are infected with a lethal coronavirus in vaccine hunt

Vitamin B12 deficiency: The sign in your walk that could signal you lack the vitamin

Dear Coleen: He dropped affair bombshell but now refuses to discuss it