Netflix has rocketed 35 percent higher so far this year, making it one of the best performers in the S&P 500.

That rally comes with a big asterisk, though. Much of its gains came in the first two weeks of the year, and since then it has flatlined, rising less than 2 percent since mid-January.

Bill Baruch, president of Blue Line Futures, would need to see a sharp move to break Netflix out of its two-month-long funk.

“It doesn’t get me excited, I don’t see a reason I need to be buying right here,” Baruch said Thursday on CNBC’s “Trading Nation.” “Get a close near $380 on a weekly basis, that would signal that it’s going to go higher and people would start to chase the market and be comfortable buying up there.”

Netflix would need to rally more than 5 percent to break out above $380. It has not closed above there since October.

Until then, the technical analyst also needs to see the stock hold up at current levels.

“Not going below $340 would be very constructive and continue to not do anything wrong as it has done for the last month and a half,” said Baruch.

A move to $340 would mark a 6 percent drop from current levels. 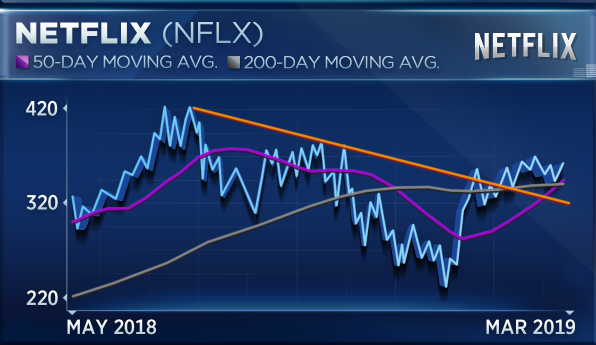 Mark Tepper, president of Strategic Wealth Partners, said the company faces tough competition and slowing U.S. growth, but he has faith in its expansion overseas.

“International growth is really the key for Netflix and they’re really going strong there,” Tepper said Thursday on “Trading Nation.” “There’s been absolutely no price hike there yet so you’ve really got this company which is shifting to more of a profitability focus after they’ve been so laser focused on subscriber growth for so many years and they do have the pricing power to do it.”

Global streaming paid membership revenue rose by more than 25 percent in every quarter last year. It is expected to increase in that range in the first quarter.

“My take is so long as Netflix can be reasonable on what they’re paying for content and not overpay, they’re going to leave everyone else in the dust,” he said.

Jim Cramer says groups of stocks are 'too toxic to touch' after Dow tanks 1,000 points

Turnaround Tuesday? Stocks tend to bounce back quickly from market drops like this one

The Long View: A Pivotal Year for Equities

Heavy rains across South Bengal turns as a blessing to farmers