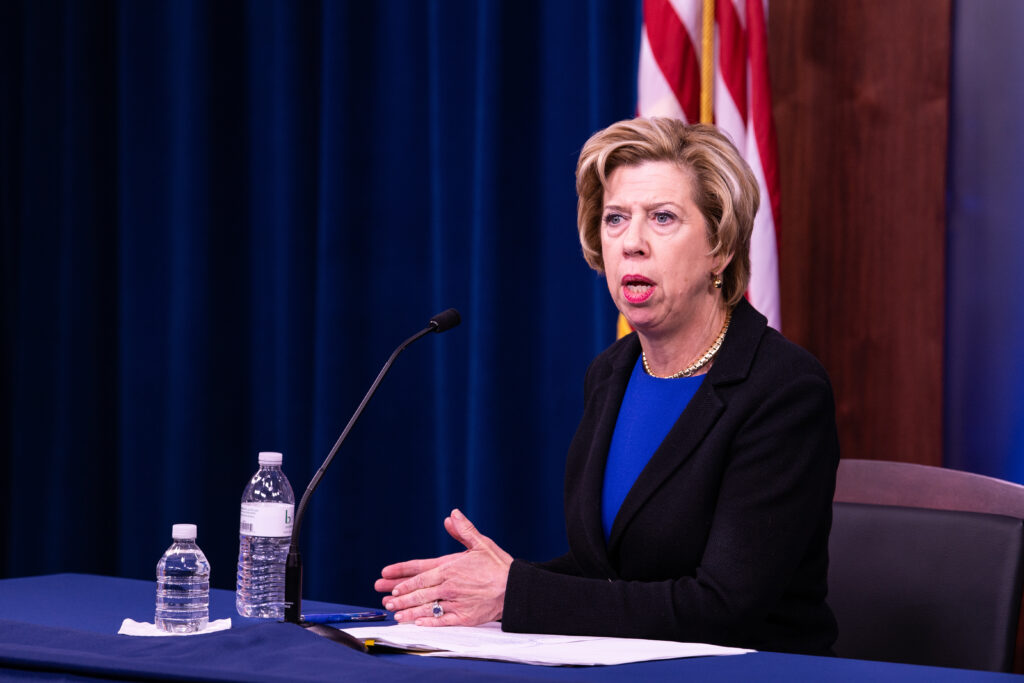 WASHINGTON: DoD needs to overhaul its multi-yearlong budgeting process to allow both increased “flexibility” and transparency into how and why decisions are made, according to a new report from the National Defense Industrial Association’s brand new Emerging Technologies Institute (ETI).

That finding echoes a section in the Senate Armed Services Committee version of the 2022 National Defense Authorization Act (NDAA), passed on July 22, that would mandate the Pentagon create an independent commission to review the Planning, Programming Budgeting and Execution (PPBE) process, Hawk Carlisle, NDIA president and a retired Air Force general, said today.

That process, he said, is “an McNamara-era process, which is slow, and risk averse” — and “complicated,” chimed in Ellen Lord, former DoD undersecretary of Acquisition & Sustainment. “And complicated,” Carlisle repeated.

Carlisle spoke to reporters after an NDIA event to roll out of the new institute and its first report; the event featured a keynote by Gen. John Hyten, vice chair of the Joint Chiefs of Staff.

The institute will concentrate on “artificial intelligence; autonomy; biotechnology; cyber; directed energy; command, control and communications; hypersonics; microelectronics; quantum science; space; and ‘5G to Next G,’” according to a fact sheet provided to reporters.

“I actually also wish we didn’t require an Emerging Technologies Institute,” Lewis said. “I wish it wasn’t needed. … I wish the problems that that we tackle, we’re planning on tackling, [and] we’ve begun to tackle weren’t problems that remain on our plate. But, we are certainly going to give it our best.”

It’s no coincidence that those technology focus areas are also those identified as high priority by DoD, including by the Office of Research & Engineering. The idea is for ETI to support the “modernization of the US industrial base” so that it can better develop cutting-edge tech, including by serving as a middle man between the defense industry and academia to bring in technical expertise.

“I would just applaud the fact that NDIA has leaned forward to do something that is truly at the nexus here of national security and economic security: making sure that we are implementing critical technologies to close gaps that we have in warfighting today that are important for our national security and important for our economy,” Lord told reporters.

The new report, called “The Modernization Quandary” and provided to reporters, was based on a workshop that included current and former DoD officials, congressional staff as well as independent acquisition and technology experts. Its recommendations were aimed at three categories of activity: advancing key technology development within DoD; speeding acquisition processes; and improving congressional oversight and relations between DoD and Congress.

To be able to better embrace cutting edge tech, DoD “should implement Zero-Trust principles across all technology areas,” the report said. “Zero-Trust is a concept formulated initially for cybersecurity, where no user or data on a network is granted access beyond its direct scope and where everything is verified.”

The report also recommends that DoD and Congress “build a margin of failure” into the budget for new programs. This includes creating “these pools of money that you can’t say ahead of time exactly how you are going to spend,” said Lord.

But this, Lord and others at the briefing said, requires building more trust between Capitol Hill and DoD; something that hasn’t exactly been present in recent years.

“I’d say that there’s fault on both sides,” Thornberry said.

One one hand, he said, it doesn’t “build confidence” when, for example, as happened a few years go, the “Air Force says one year: ‘we want to retire the U-2 and keep the Global Hawk; and the next year, they say: ‘we want to keep the Global Hawk’ and reverse that.” On the other hand, he explained: “You also have folks on Capitol Hill who will exploit, maybe for their own personal intentions, certain issues” when a program fails but in a good way that DoD can “learn from.”