Learners will be allowed to take their driving tests again from today after the four-month suspension imposed during the coronavirus lockdown was lifted.

Safety measures have been put in place to protect learners and examiners from Covid-19, with the Driver and Vehicle Standards Agency (DVSA) publishing a raft of new guidelines for candidates.

This includes the instant cancellation of an exam if a learner arrives without a face mask and the immediate termination and failure of tests if a serious or dangerous fault is performed by the driver. 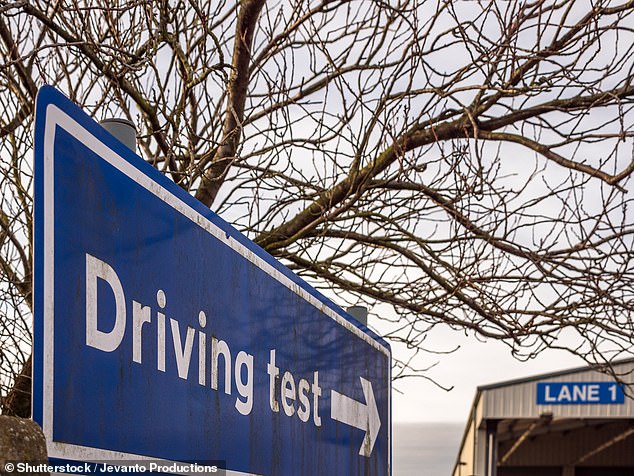 New rules for driving tests that restart today: The DVSA has introduced a raft of new measures for practical exams to ensure the safety of learners and examiners

The DVSA, which oversees driving tests in the UK, said the new rules for driving tests are part of efforts to prevent the spread of the coronavirus and reduce the time learners and examiners are sat in close proximity.

One of the most notable changes is the abrupt termination of a test if a learner makes a serious or dangerous mistake.

In normal circumstances, a candidate who performs one of these errors will be allowed to continue their practical driving exam until the end, despite it resulting in a failed attempt.

The driver would usually not be informed about their fault until the exam is completed.

However, to help impose social distancing, this type of error will trigger an immediate termination of the test – and a fail result – from today.

‘In this new era of driving tests, the examination will be stopped immediately if the candidate commits a serious or dangerous fault,’  Ian McIntosh, ceo of RED Driving School explained to This is Money.

‘Previously, the test would continue, which gave the candidate the benefit of a full test experience where they’d be informed at the end of the session that they hadn’t passed.

‘This new measure has been introduced to limit contact time between the examiner and learner driver. While this make sense from a safety perspective, it does feel like the experience of being tested is a little diminished.’

The DVSA has also confirmed a number of other new coronavirus-related measures put in place for safety reasons following lockdown. 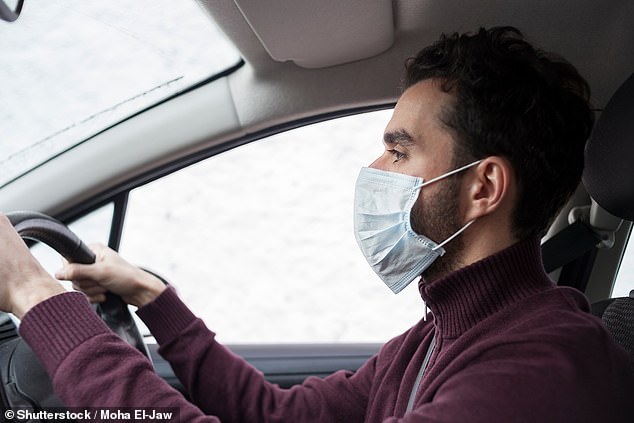 Learners who arrive at a test centre for their exam without a face mask can have their test cancelled and examiners have discretion to end a driving test early if they feel a face covering has become a safety issue in any way – for instance, causing glasses to fog up

Learners who arrive at a test centre for their exam without a face mask can have their test cancelled, unless they have already declared they can’t wear a covering for a physical or mental illness where it could cause distress.

Examiners can also ask learners to stop driving during the test to adjust a face mask if it has moved and is no longer covering the learner’s nose and mouth.

Invigilators will also have discretion to end the driving test early if they feel a face covering has become a safety issue in any way – for instance, causing the glasses of the driver to fog up.

At the end of the practical test, driving examiners will ask students to get out of the vehicle before they offer any test result feedback rather than deliver the news inside the car. This is to extend social distancing when possible.

The DVSA also warns learners that they must cancel a test if they have any coronavirus symptoms, have been in contact with someone who has the coronavirus or have returned to the UK in the last 14 days.

Practical tests will restart in England from today (Wednesday 22 July), though only candidates who have had their already-booked exams put on hold will get the chance to sit their exam this week.

Driving tests for non-critical workers have been cancelled since 20 March, meaning some half a million budding motorists have been chomping at the bit to get their hands on their full licences. 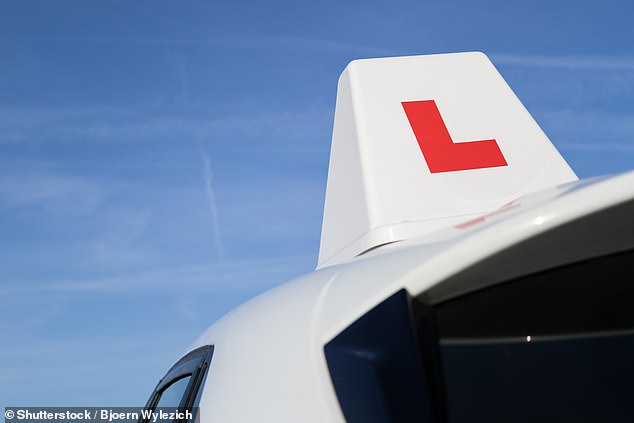 Back on the road: Driving tests will resume today after a fourth-month lay-off as part of a suspension during the coronavirus pandemic

On average, some 4,000 learners were sitting driving tests every day in the UK before the nation went into lockdown, meaning a huge backlog of people waiting to get their hands on a licence.

With there being 124 days between practical tests being halted and them restarting, an estimated 496,000 learners are raring to sit their exams.

Driving theory tests in England were also suspended on 19 March as part of the wider efforts to restrain the spread of Covid-19, though restarted again on 4 July as part of the easing lockdown measures.

Theory tests will resume in Scotland from today, though the date for practical tests to restart north of the border won’t be confirmed until an announcement on 30 July.

In Wales, theory tests restart on 3 August and car driving tests will resume from 17 August.

Across the country, tests have still be going ahead as scheduled for those deemed to be critical workers and have in recent months become more reliant on using a car to commute with the public being urged to avoid public transport if at all possible.

With all learners in England set to be allowed to sit their tests again from today, the Driver and Vehicle Standards Agency has urged them to speak to their instructor to make sure they are still well prepared and up to test standard before rebooking their driving test.

Driving lessons in England were given the green light on 4 July, suggesting many learners have already taken refresher sessions ahead of the test restart on Wednesday.

DVSA chief driving Examiner Mark Winn said: ‘I know many learners are keen to take their driving test but it is vital they have the right skills and knowledge to help them through a lifetime of safe driving before attempting it.

‘Anyone who is rebooking or taking a test should make sure they’ve had enough practice with a professional driving instructor and are ready.

‘Learners should practice driving on a variety of roads and in different driving conditions so they are well prepared for driving independently.’

Those learners whose tests were cancelled due to the pandemic are being invited to rebook a test first.

Once this has been completed and we have tested critical workers DVSA will open the booking service to the general public.

Peter Brabin, head of training at Bill Plant Driving School, said the business is experiencing a record month of demand, with a four-fold increase in pupil enquiries and driving lesson bookings as thousands have been left frustrated by the inability to sit their tests in the last four months.

‘Pupils and our driving instructors are thrilled to be back but with such a backlog we urge all parties to be patient and expect some delays in either waiting for lessons or driving test availability,’ he warned. 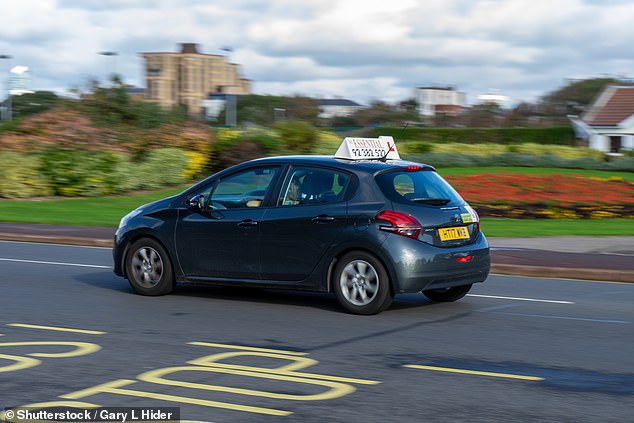 AA Driving school said it welcomed to return of tests but said that thousands of learner drivers are being treated unfairly over administration issues relating to Covid-19.

Whilst deadlines for MOTs were extended and photo licences due for new photo renewal automatically given a seven-month exemption, learner drivers whose theory test expired during lockdown will be expected to pay to take the test again.

Data shows more than 35,000 people looking to pass in a car have now lost their certificates because test centres and driving lessons were suspended during lockdown.

Sarah Rees, managing director of the AA Driving School, said: ‘Whilst it is great that tests are re-starting, thousands of learner drivers have been unfairly penalised because theory test certificates have not been extended.

‘Many learners will already have faced economic hardship during lockdown and to now have to pay £23 to re-take a test they have already passed is just rubbing salt into the wound.

‘We have seen a huge increase in demand for lessons since lockdown, partly because of pent-up demand, but also because people are being encourage away from public transport.

‘If MOTs and photo card renewals can be extended, then so should theory tests.’

Mr McIntosh said that the volume of new learners visiting RED Driving School’s website is currently at an all-time high and is double what he would normally expect at this time of the year.

‘Nearly 2,000 people in the UK turn 17 each day, making them eligible to drive,’ he explained to This is Money.

‘Pre-lockdown, 4,000 driving tests were held per day. Nearly half a million tests have been cancelled since 20 March, and with hundreds of thousands of new seventeen year olds eager to get behind the wheel, there’s a big back log.

‘The Government is telling people to avoid public transport – in fact, the use of a private car is now being encouraged, so the news that driving tests can resume will be welcomed by thousands of learner drivers up and down the country.’

‘Covid-19 is likely to be with us for a long time. We all need to get used to new ways of working and travelling, and restarting driving tests is key to our new reality.’

Analysis of accident rates over a motorist’s lifetime against the number of times a driving test has been taken suggests that those that pass with the fewer attempts have fewer crashes on average.

The report found that drivers who pass their test on the first attempt, on average, have 1.6 prangs in their lifetime while those who take six attempts to get their licence average 6.6 shunts in their driving career.