Press coverage about Nike (NYSE:NKE) has trended somewhat negative recently, according to InfoTrie Sentiment Analysis. The research group identifies negative and positive press coverage by reviewing more than 6,000 news and blog sources in real-time. The firm ranks coverage of publicly-traded companies on a scale of negative five to five, with scores closest to five being the most favorable. Nike earned a media sentiment score of -1.30 on their scale. InfoTrie also assigned media headlines about the footwear maker an news buzz score of 0 out of 10, indicating that recent press coverage is extremely unlikely to have an effect on the stock’s share price in the near term.

Here are some of the news stories that may have impacted Nike’s ranking:

Nike (NYSE:NKE) last issued its quarterly earnings data on Thursday, June 27th. The footwear maker reported $0.62 EPS for the quarter, missing analysts’ consensus estimates of $0.66 by ($0.04). The company had revenue of $10.18 billion for the quarter, compared to the consensus estimate of $10.15 billion. Nike had a return on equity of 45.12% and a net margin of 10.30%. The business’s revenue for the quarter was up 4.0% on a year-over-year basis. During the same period in the prior year, the firm posted $0.69 earnings per share. On average, sell-side analysts forecast that Nike will post 2.9 EPS for the current year.

The business also recently disclosed a quarterly dividend, which was paid on Monday, July 1st. Shareholders of record on Monday, June 3rd were issued a dividend of $0.22 per share. This represents a $0.88 dividend on an annualized basis and a yield of 1.01%. The ex-dividend date was Friday, May 31st. Nike’s dividend payout ratio is currently 35.34%. 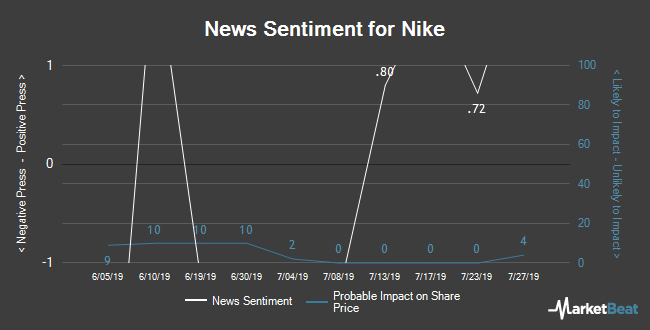 Receive News & Ratings for Nike Daily – Enter your email address below to receive a concise daily summary of the latest news and analysts’ ratings for Nike and related companies with MarketBeat.com’s FREE daily email newsletter.