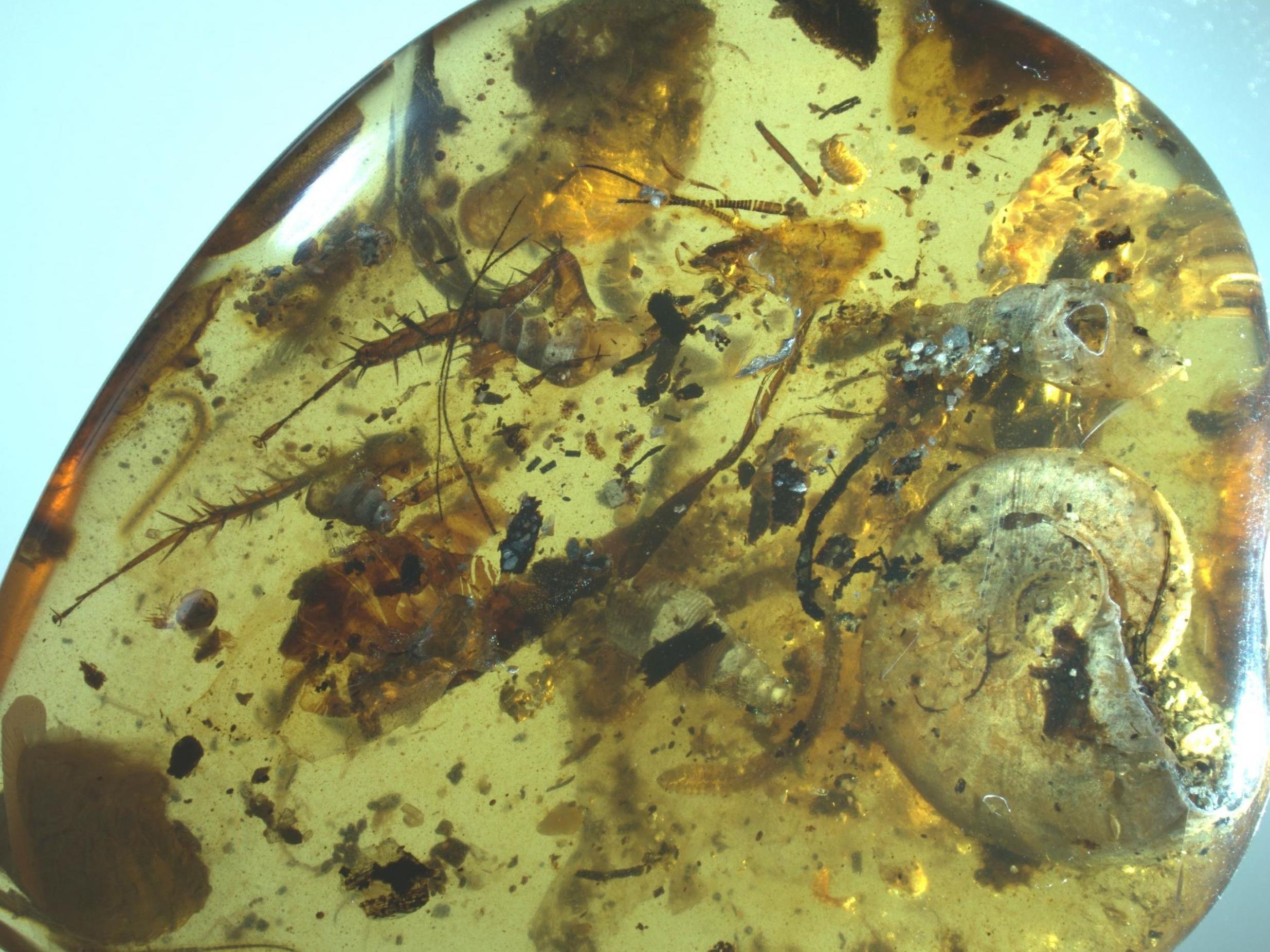 A 99-million-year-old ammonite trapped in amber has been discovered for the first time.

Found in northern Myanmar, it contains at least 40 other creatures, including  spiders, millipedes, cockroaches, beetles, flies and wasps that would have lived on the forest floor.

Ammonites are extinct sea-dwelling relatives of squid. It is incredibly rare to find sea life trapped in amber because the fossilised resin is produced by land-based trees.

“The find was a big surprise,” Professor Bo Wang from Nanjing Institute of Geology and Palaeontology told The Independent. “We never imagined we would find an ammonite in amber. This is the first record of ammonite in amber, and also the first marine macrofossil in amber.”

All the shells in the amber are empty and have no soft tissue, according to researchers at the institute from the Chinese Academy of Sciences. They believe this proves the organisms were long dead by the time they were engulfed in the resin.

The outer shell of the ammonite is also broken and the entrance is full of sand. Scientists believe it would have washed up on a sandy beach covered with shells that was close to resin-producing trees.

The sample also contains flying insects which were probably trapped by the resin as it was pouring out of the tree.

As, the ammonite which is 33mm long, 9.5mm wide, 29mm high and weighs 6.08g, flowed down the trunk it trapped organisms near the foot of the tree and when it reached the beach it entombed the shells.

The amber also contains other marine fauna such as sea snails and sea slaters.

Of the terrestrial fauna found in the amber, mites are the most abundant, according to the paper published in PNAS.

“It is the same as the X-ray examination in the hospital, but the resolution is much higher,” Prof Wang said.

He added: “We took several thousands of images and combined them together to get a 3D photo. Micro-CT is also a non-destructive testing, so it does not destroy the amber.”

Researchers found the ammonite was a juvenile Puzosia (Bhimaites) living during the late Albian-early Cenomanian age. Its presence in the amber helped scientists date the deposit.

It also shows that a Myanman amber forest existed near a dynamic coastal environment 99-million-year-old.