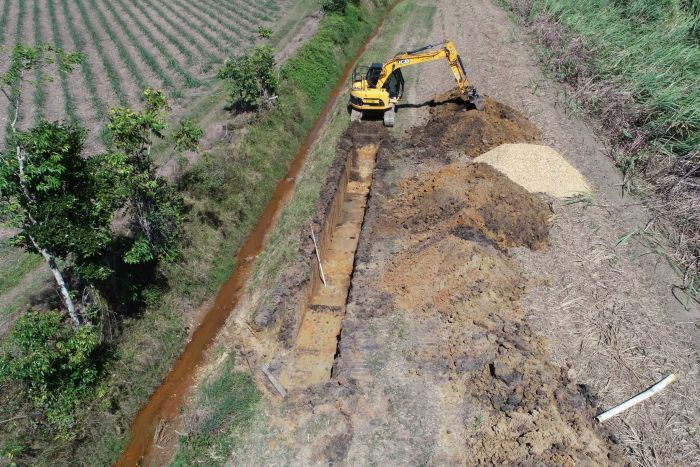 Photo:
A trench is dug to create one of six trial bioreactors at a farm in Tully, Queensland. (ABC Rural: Tom Major)

A biological fix for nitrogen fertiliser run-off is being trialled near Tully in far-north Queensland, as part of a collaboration between scientists and farmers.

Six bioreactors are being built around Tully and Innisfail under the Wet Tropics Major Integrated Project, a $15-million Queensland Government project delivered by Terrain NRM.

A 10-metre trench dug between sugarcane paddocks and a nearby drain will trap water running from the field, where it will slowly filter through woodchips where bacteria strip it of any nitrates.

“It’s a carbon-rich, oxygen-poor environment — essentially it will be like a giant peaty swamp,” he said.

“The bacteria, bugs that you can’t see, they’re using the nitrate as food, [this] is the simplest way to describe it.

“Nitrogen gas will then seep up through the reactor and into the atmosphere.

While science has detected nitrogen making its way to the Coral Sea, uncertainty still surrounds the actual amounts leaving from paddocks.

READ  After bronze and iron, welcome to the plastic age, say scientists

“We just don’t have a good handle on how much nitrate is in there when it comes off the paddocks, if it comes off in large volumes,” Mr Bayley said.

“This project is about the bioreactor and how well it works, but it’s also about really understanding how nitrate moves off the paddocks.” 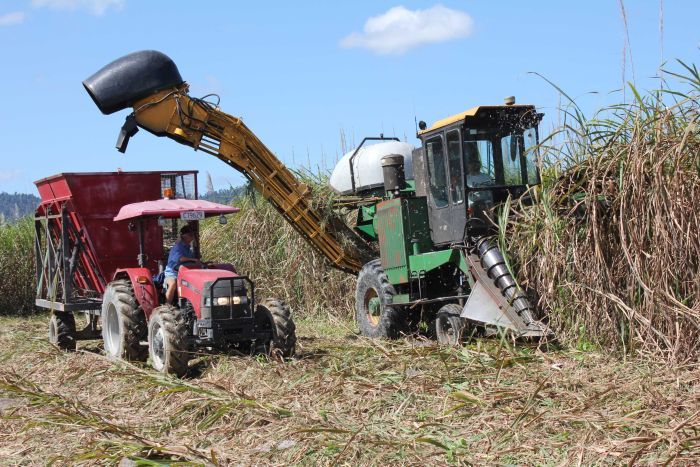 Photo:
The sugarcane industry has questioned allegations it is worsening reef health after years of reducing its nitrogen inputs. (ABC Rural: Tom Major)

Cane grower Mario Quagliata was sceptical about the allegations of nitrogen run-off that had been levelled against farmers and was looking forward to seeing the data.

Mr Quagliata’s main motivation for involving his cane paddock in the project was to receive hard data about how much fertiliser, if any, was being wasted.

“As the farmer, I’m more interested in how much nitrogen is coming out of that pipe.”

The Quagliatas used between 125 and 140 kilograms of nitrogen per hectare annually and Mr Quagliata was concerned further reductions could impact yield.

The family had adopted laser-levelling of fields in recent years to manage their fertiliser inputs and keep more on-farm.

But in Australia’s wettest region, where rainfall could be up to 4 metres each year, keeping all fertiliser in the root zone could be difficult.

Early information on the bioreactors’ efficacy and levels of nitrate leaving the paddock will be available in 12 months’ time.

“Absolutely critical, Mario, he wants to know what his water quality is … is his fertiliser being used the way he wants it to be?” Ms Argent said.

READ  Cannabis users who start by smoking skunk up to five times as likely to become dependent, study suggests

“We’re also looking at wetlands and sediment basins as options to complement our farm services, looking at fertiliser application, row spacings, when fertiliser is applied,” she said. 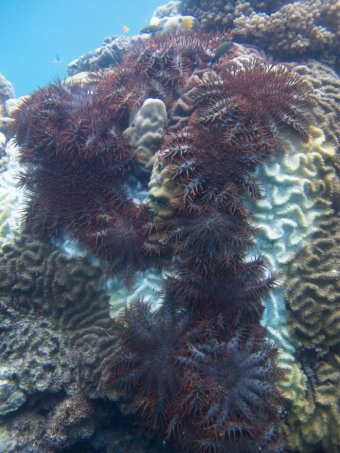 “I’d like to see them proven first, then yeah it’d be good to get more funding to do projects like this,” he said.

“If we can harness the information and we can find alternatives, we may be able to grow the cane on less fertiliser.”

With the threat of fines of more than $200,000 hanging over farmers’ heads, a war of words has broken out between government and farm groups.

“I think the regulations should be put on hold at least until the end of BMP [Best Management Practice],” Mr Quagliata said.

“They said 2020 was when we had to all be BMP compliant — they’re bringing in the regulations even before the close date of BMP.”

But Professor Michael Bell from the University of Queensland, who advised the Government on the laws, said the laws aligned with best practice.

“The regulations that are being proposed do nothing more than legislate the current industry benchmarks for nitrogen fertiliser rates,” he said.

“The issue we’ve got at the moment is the fertilisers we typically use are rapidly converted into moveable nitrogen.

“Going into a wet season environment, that nitrogen can end up in lots of places rather than the crop, because it’s available earlier than the crop needs it.” 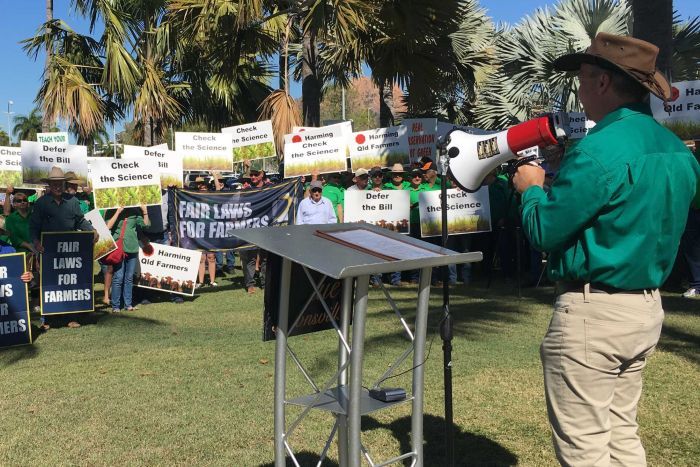 Professor Bell said run-off rates of between 2 to 10 per cent had been documented using traditional urea fertilisers, but nitrate could reach catchments in other ways.

“Deep leaching of nitrate into the soil profile potentially ends up in groundwater or moves laterally into streams,” he said.

A new generation of enhanced efficiency fertiliser that used slow-release technology was being trialled, but were generally 10–20 per cent more expensive.

“Currently they’re more expensive than traditional forms but those sorts of products are being developed all the time,” he said.

With multiple difficulties around improving fertiliser efficiency in tropical climates, with heavy rainfall and limited periods for application, managing losses looms as the big challenge for industry.

Professor Bell said working with industry to find better ways to apply less fertiliser for the same result was key to improving yields and profitability.

“If we can harness that [lost] nitrogen and get it into a crop where it’s going to do some good rather than lost to the environment, we’ll have come a long way,” he said.

US housing starts total 1.191 million in July, vs 1.24 million expected

Loch Ness monster could be giant eel, most extensive study of lake ever suggests