Apple, Jaguar Land Rover and the owner of Holiday Inn have become the latest businesses to spell out the impact of the deadly coronavirus.

Apple said that although some of its Chinese factories were now reopening, slow progress would hit production of its iPhone and cause a worldwide shortage.

It also warned that its shops in China had been forced to remain closed or operate on reduced opening hours, with the turmoil meaning it will miss its revenue forecast of £43.4billion to £51.5billion for the first three months of 2020. 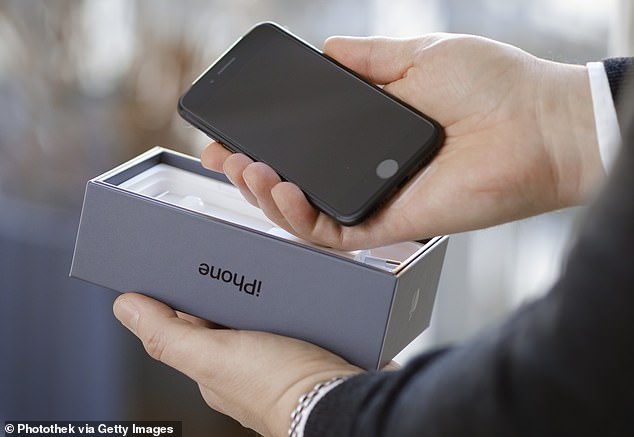 Apple said that although some of its Chinese factories were now reopening, slow progress would hit production of its iPhone and cause a worldwide shortage

Apple said: ‘Work is starting to resume around the country, but we are experiencing a slower return to normal conditions than we had anticipated. As a result, we do not expect to meet the revenue guidance we provided for the March quarter.’

It added: ‘Apple is fundamentally strong, and this disruption to our business is only temporary.’

The sales warning sent the tech giant’s shares down more than 2 per cent after US markets opened.

In a separate warning just hours later, the boss of Jaguar Land Rover revealed his firm had been forced to fly parts out of China ‘in suitcases’ because of supply chain problems there.

Sir Ralph Speth, 64, said that the issue posed ‘a risk for overall production’ and the car maker was racing to prevent its UK plants from running out of components after next week.

‘We have flown parts in suitcases from China to the UK just to make sure that we have got the right parts,’ he said, according to the Financial Times.

And Intercontinental Hotels Group (IHG), which owns the Holiday Inn chain, said fewer travellers were booking its rooms in China because of the virus.

In its annual results, the company revealed it has now closed or partially close 160 of its 470 hotels in the region, which covers China, Hong Kong, Macau, and Taiwan.

IHG estimated that the turmoil was costing its Chinese business £3.9million per month, but boss Keith Barr claimed it was ‘a short-term blip’ and that the region represented less than 10 per cent of profits.

The firm last month said it would allow customers to change or cancel stays in mainland China, Hong Kong, Macau and Taiwan at no additional cost until February 29.