(TNS) — An Ohio-funded program that reimburses companies up to $2,000 per each credential worker is allowing employers retrain current and potential employees in technology-related jobs.

Secure Cyber Defense in Miamisburg has used the program to get its employees tech training and its founder credited it in helping the company grow.

Lt. Gov. Jon Husted toured the company on Wednesday and touted the success of TechCred, the Ohio program he said helps employers build a stronger workforce with the skills needed in a technology-infused economy.

“These are companies that will be essential for consumers and businesses that need these resources,” Husted said. “They’re growing and talent is its only impediment.”

New employees can take this state-paid training online as they learn new skills and receive various certifications to protect companies from cyber threats locally and from around the world.

Husted said many of these certifications can be earned in less than a year and can lead to higher paying positions of more than $100,000 a year with advanced certifications.

He said the TechCred program was created two years ago and took six months to begin. In that time, Husted said there have been 25,000 credentials and the goal is to have 20,000 credentials earned a year, free of charge

Shawn Waldman, founder and CEO of Secure Cyber Defense, said his company helps organizations respond to cyber attacks from anywhere around the globe.

“We concentrate on working with businesses to get them back on their feet again,” he said.

Waldman said there are 35 million unfilled jobs globally. He said there more than 714,000 of those jobs in the U.S. of which 314,000 are unfilled as cyber threats and attacks continue to increase.

“Don’t be intimidated by these high tech jobs,” he said.

The Miamisburg-based company opened seven years ago, operates its own cyber threat detection center and has partnerships with federal and state law enforcement to help identify and deter cyber attacks, frauds, etc. The company shares cyber security threat information with other partner agencies including the FBI and the U.S. Secret Service.

In their intelligence center filled with monitors tracking cyber threats and attack sheading from Asia as well as Western and Eastern Europe to and from the U.S., an analyst or engineer can see these issues that happen every few seconds.

Waldman, a Dixie High School graduate, said the company opened with two employees and generated about $90,000 in revenues in 2016. By 2021, the company grew to 21 employees and more than $5 million in revenues. He said he saw a need to create a cyber security company as a way to help businesses protect themselves.

“I wanted to take the complexity out of a complex industry,” Waldman said.

He said, the company has 126 clients and investigates more than 50,000 cyber security threat incidents a month with most coming from international locations. Waldman said international attacks are hard to prosecute.

In addition to his employees, the company also uses cyber automation and force multipliers to seek out potential cyber threats, Waldman said. He said the challenges of threat overloads, staffing and technology has added to the overwhelming volume and sophistication of threats.

In 2019, Waldman said his company recovered $800,000 for an Ohio company after a cyber attack. He said in the past two years, the company processed, investigated and recovered in excess of $1 billion for Ohio businesses. 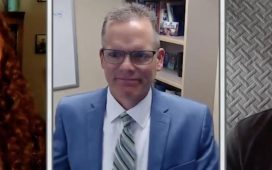