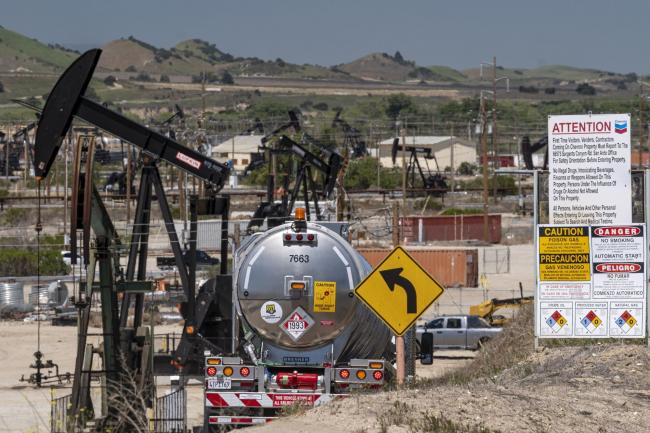 © Bloomberg. A tanker truck drives past oil well pump jacks operated by Chevron Corp. in San Ardo, California, U.S., on Tuesday, April 27, 2021. Oil climbed by the most in nearly two weeks with the OPEC+ alliance and BP pointing to signs of a robust demand recovery taking shape in parts of the world. Photographer: David Paul Morris/Bloomberg

(Bloomberg) — Oil traded above $71 a barrel as investors weighed the outlook for rising demand against extended anti-virus curbs in some economies, with officials tackling the challenge posed by more infectious coronavirus variants.

West Texas Intermediate was 0.6% higher after ending Monday little changed. Most-active prices are on course for a quarterly gain after touching the highest level in 32 months in intraday trading in the week’s opening session.

Crude has soared this year as vaccination programs have turned the tide against the pandemic in the U.S., Europe and China. Still, a decision by the U.K. to extend virus restrictions has tempered some optimism around robust summer consumption. On Monday, World Health Organization Director-General Tedros Adhanom Ghebreyesus warned that the new variants have substantially increased transmissions, and the virus is now “moving faster”.

China is among the brighter spots, and in Asia’s largest economy it is cars that have underpinned the recovery. Gasoline demand in May was 5% higher than the same period in 2019, according to the median of five estimates from the nation’s top oil companies including China Petroleum (NYSE:) & Chemical Corp.

There are positive signs from North America, too. Canada’s Pembina Pipeline (NYSE:) Corp. said that it has seen a continued recovery in its business, with throughput this quarter in-line with pre-Covid levels. The company said that it expects further growth in volumes over the remainder of the year.

Oil traders are also tracking prospects for the potential return of official Iranian crude supplies, with Tehran and world powers in talks to revive a 2015 nuclear deal. While Iran’s Deputy Foreign Minister Abbas Araghchi has cast doubt over the chances of reviving the accord before national elections on June 18, delegations remain at work trying to overcome remaining issues.

Brent’s prompt timespread was 59 cents a barrel in backwardation. That’s a bullish pattern — with near-term prices trading above those further out — and compares with 41 cents a week ago.