A one-year-old with leukaemia has inspired more than 600 people to sign up to a bid to find her a stem cell donor after chemotherapy failed to cure her cancer.

Phoebe Ashfield was diagnosed with acute lymphoblastic leukaemia (ALL) after a chest infection over Christmas, when she was just seven months old.

Parents Emma Wyke, 26, and Jordan Ashfield, 26, had their lives turned ‘upside down’ following their daughter’s diagnosis.

Gruelling chemotherapy has not worked for Phoebe, and now her only option is a stem cell transplant to treat the blood cancer.

Phoebe’s parents were not a match so, in a race against time, friends and family took to Facebook in a desperate search for stranger donors.

And more than 600 people turned up to swab events over the weekend, giving the family fresh hope. 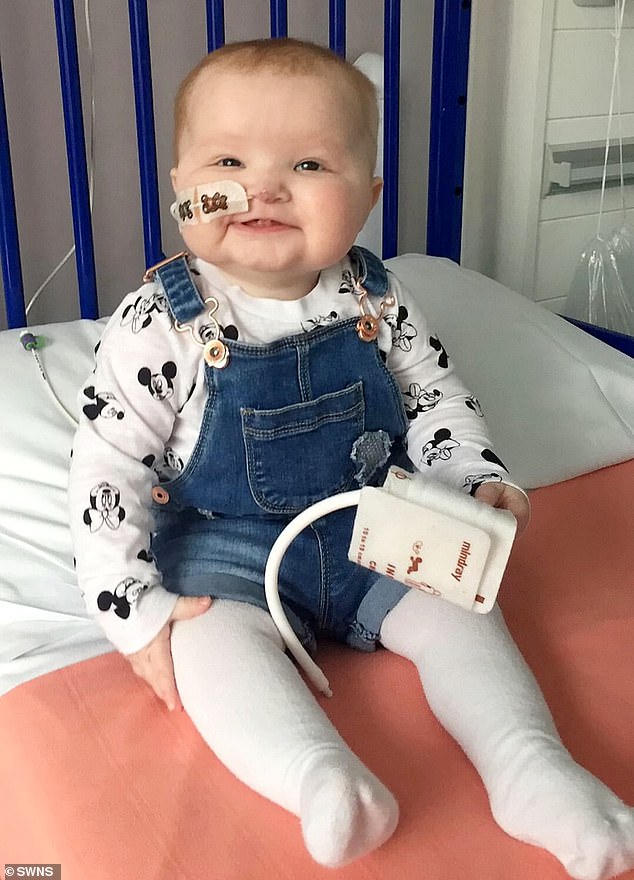 Phoebe Ashfield, aged one, was diagnosed with acute lymphoblastic leukaemia when she was just seven-months-old in January 2018 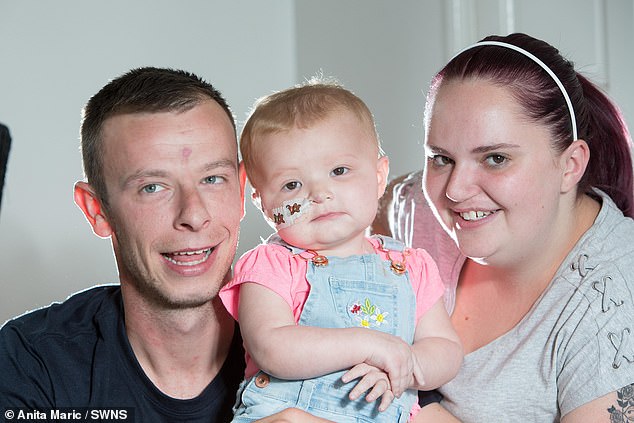 Parents Emma Wyke, 26, and Jordan Ashfield, 26, pictured with Phoebe, had their lives turned ‘upside down’ following the diagnosis 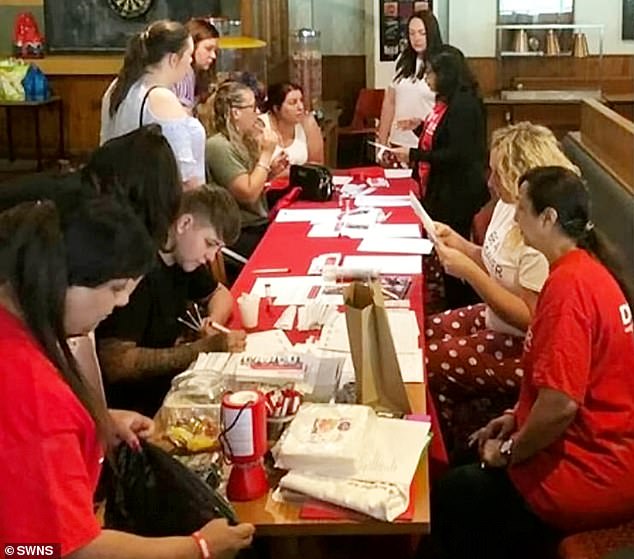 A staggering number of people were swabbed in Phoebe’s hometown, Dudley, West Midlands, to see if they were a stem cell donor match 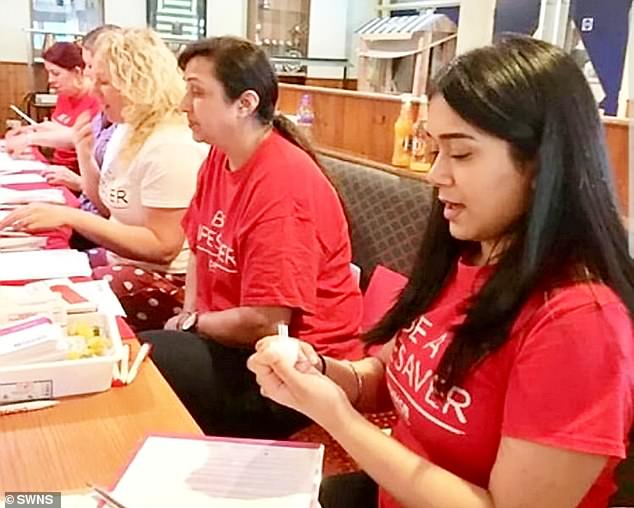 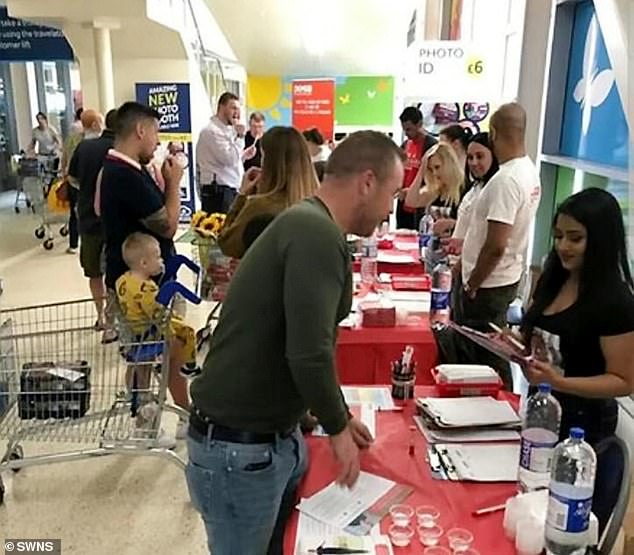 More than 600 people turned up to be tested, inspired by Phoebe’s story

Mother-of-one Ms Wyke, who gave up her telesales executive job to be a full-time carer, was ‘overwhelmed’ by the amount of people who turned up to be tested.

She said: ‘I was full of emotion at the time. It was so overwhelming. The fact that people had taken time out of their day to come down and see if they were a match for Phoebe.

‘It just makes things more real. It was such a good turn out. There aren’t words to describe it.

‘As a parent seeing all these people come down and you can’t thank them enough, thank you doesn’t seem to enough.’

HOW DO STEM CELL TRANSPLANTS WORK?

As a treatment for acute lymphoblastic leukaemia (ALL), stem cell transplants work by replacing blood cells which are diseased or destroyed by chemotherapy.

Having a stem cell transplant means the body can withstand higher doses of chemotherapy and other cancer treatments.

During chemo, while cancer cells are destroyed by the drugs, so too are healthy blood cells which are necessary for the internal organs and immune system to work properly.

If too many of these are destroyed it can be deadly, so doctors must control how much chemotherapy someone has – they want to destroy as many cancerous cells as possible without killing a deadly amount of healthy cells.

Having a donor means that cells killed by chemo can be replaced using donor stem cells – which turn into red and white blood cells once injected into the body – helping the patient to recover quicker from the gruelling therapy.

Stem cells are taken from a donor’s blood sample so are preferable to bone marrow transplants, which have to be done under general anaesthetic.

Phoebe was diagnosed with ALL, in which cancer attacks the white blood cells, at Birmingham Children’s Hospital on January 18th.

Ms Wyke said: ‘It started off as a cold and chest infection just Christmas last year.

‘I had taken her to the doctors and they gave her some antibiotics but she still didn’t get over it a week later.

‘She had been sick all over her dad and had a temperature of 39 degrees. I took her to Sandwell Hospital and they thought she was anaemic because of how pale she was.

‘But when they looked at her bloods, they came back with the diagnosis of blood cancer.

‘We didn’t know what type of cancer it was until they transferred us over to Birmingham Children’s Hospital – which is where she was diagnosed.’

ALL starts from young white blood cells in the bone marrow. There are around 650 new cases in the UK every year. In the US, ALL affects approximately 1.7 adults per 100,000.

High dose chemotherapy was started straight away and Phoebe had blood transfusions.

Ms Wyke said: ‘Four months after being diagnosed she relapsed, the chemotherapy wasn’t working in way it should’ve been.

‘That is when were told by doctors, Phoebe needed a stem cell transplant as the chemotherapy wasn’t working. 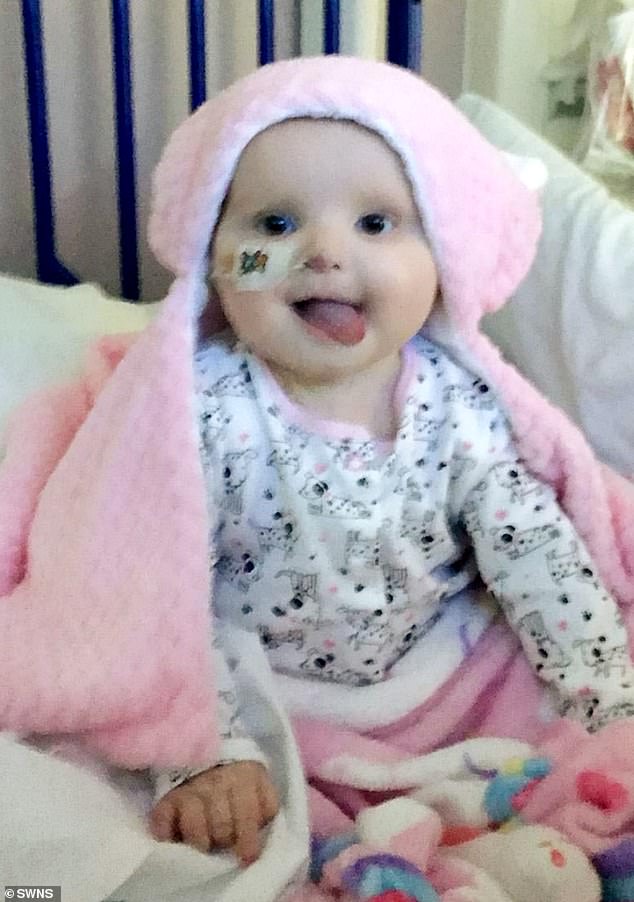 READ  Bed bugs: What do bed bug bites look like? How to identify a bed bug infestation

Phoebe, pictured in Birmingham Children Hospital, was diagnosed with cancer after she was vomiting and had a high temperature 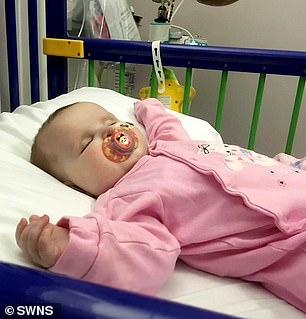 Sadly, gruelling chemotherapy over four months did not work for Phoebe 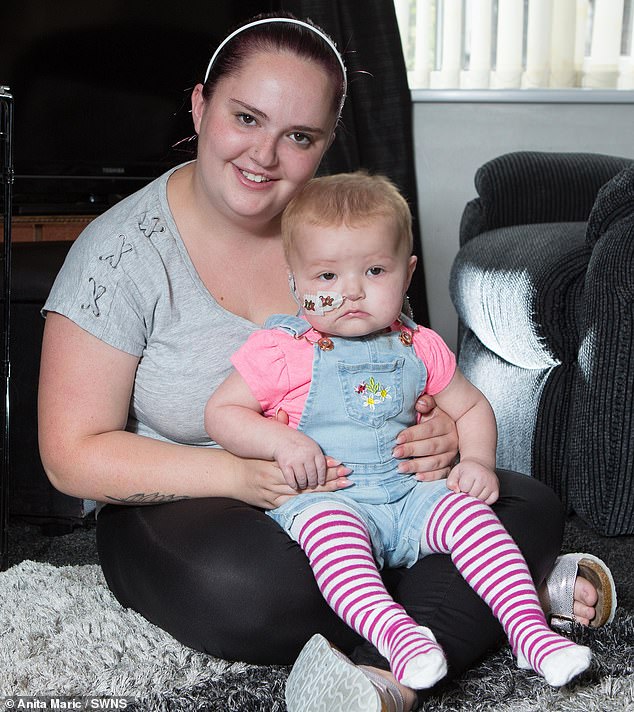 Mother-of-one Ms Wyke, who gave up her telesales executive job to be a full-time carer, was ‘overwhelmed’ by the amount of people who turned up to be tested to be a stem cell donor

The stem cell drive took place at two stations on Saturday at Tipton Sports Academy and a Tesco Extra store on Birmingham Road in Dudley.

Ms Wyke said: ‘A friend of mine, Amy Smith and Nikki Price set it up. Nikki is a friend of one of the mums who child goes to the same school at Oscar Saxelby-Lee.’

Oscar, a five-year-old boy with the same cancer, hit headlines in Mach this year when a record breaking 10,000 people came forward to test if they were eligible to be a donor.

Oscar was given the go-ahead to receive the stem cell transplant when a match was found, and in May, his parents said the operation was a success and they have every hope the ‘special cells’ will save their ‘beautiful’ boy. 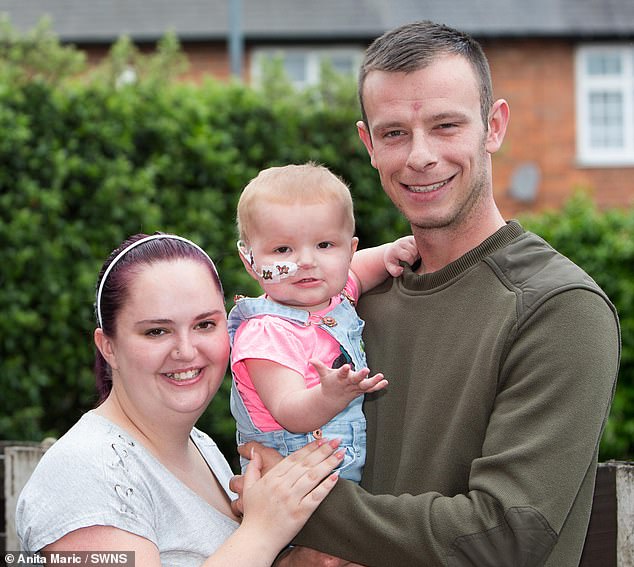 Ms Wyke and Mr Ashfield, an electrician, are now waiting to discover if any of the good samaritan donors are a match to enable the transplant to go ahead 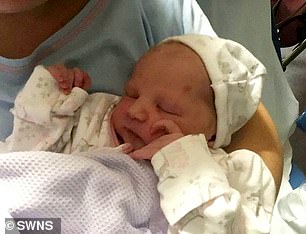 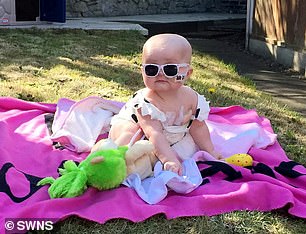 Ms Wyke said: ‘If I could, I would take the condition away from her within a second’ 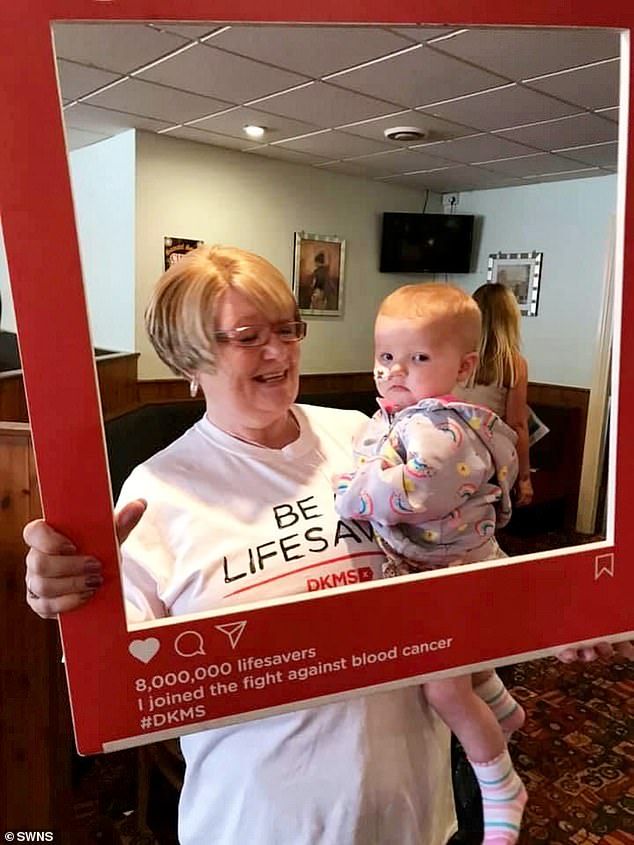 DKMS organises donor recruitment in the UK for around 2,000 people in the UK searching for a blood stem cell donation each year. Pictured, Phoebe at the donor rally 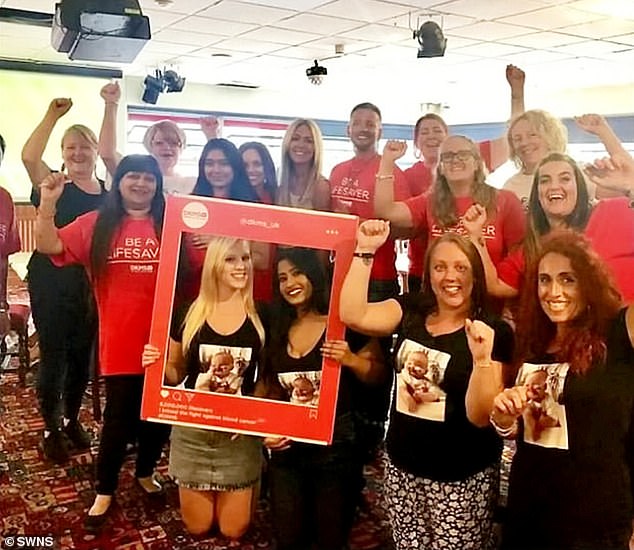 Ms Wyke’s friends organised the donor recruitment (pictured) after being inspired by Oscar Saxelby-Lee. The five-year-old boy hit headlines in Mach this year when a record breaking 10,000 people came forward to test if they were eligible to be a donor

DKMS organises donor recruitment in the UK. It says there are around 2,000 people in the UK searching for a blood stem cell donation each year and more than 37,000 people waiting worldwide.

Ms Wyke said: ‘They [her friends] worked together and contacted DKMS and they said yes to helping us set up a drive.

READ  Alarm as uptake drops for all routine child jabs

The couple are now waiting to discover if any of the good samaritan donors are a match to enable the transplant to go ahead.

Ms Wyke said: ‘Phoebe is so brave. It’s a lot for a one-year-old to go through. She always smiling. She has her off days but that’s normal for a child, but she just a normal happy one-year-old.

‘She just so playful and loving. It is just not fair for any child to go through what this.

‘If I could, I would take the condition away from her within a second. We just got to be there for her and help her get through this.

‘Our world was turned upside down when she got her diagnosis. People can still register online with the Anthony Taylor Trust and DKMS.

‘A swabbing pack will be sent out in the post and then send it back. Then you can help children such as Phoebe, Oscar and others just like them.’

HOW CAN YOU SIGN UP TO THE STEM CELL DONOR REGISTRY?

To become a potential blood stem cell donor you need to visit DKMS.org.uk.

Your age, location and current health status are important, so you will be asked questions to see if you are eligible to donate.

Anyone between the ages of 18-55 and in general good health can become a potential blood stem cell donor. You must also be permanently living in the UK.

You will receive three cheek swabs that you move around your mouth for a minute each.

Once DKMS receive your swabs, they will analyse your tissue type and add your details on the UK stem cell registry in an anonymised form.

Your details will then be part of blood stem cell donor searches for people all over the world who need a genetic match to get a second chance at life.

The other 10 per cent have the blood taken from the bone marrow in the hip or pelvis. The blood stem cells completely replenish themselves within two to four weeks.

Cervical cancer symptoms: The first noticeable sign of the deadly disease to watch out for

If A&E targets shame the Tories, the solution is not to scrap them | Letters

Daughter, 34, who lost 2 siblings & dad to diabetes is crowdfunding own funeral after she’s diagnosed with the disease

This Apple Supplier Made One Crucial Mistake – Washington Post

Hospitals to send experts into wards to lecture smokers and boozers how to quit...

Dementia: Is the brain disease fatal? How to slow down symptoms of the condition