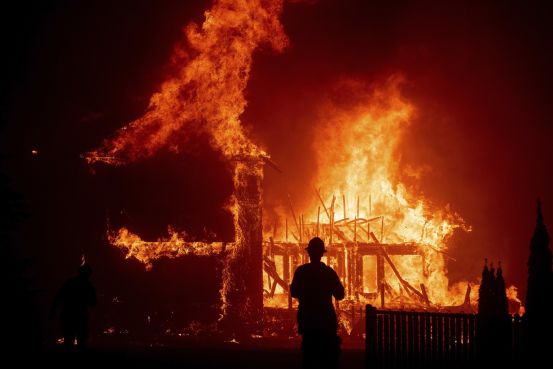 Pundits and politicians have taken to calling the rising incidence of catastrophic wildfire “the new normal.” But California’s experience in the 21st century is neither new nor abnormal. It is, in fact, the old normal. The devastation unfolding today is how nature manages forests. Like an untended garden, an abandoned forest will grow until it chokes itself to death. Nature deals with morbid overcrowding through drought, disease, pestilence and ultimately catastrophic wildfire.

Scientists studying charcoal deposits in California estimate that prehistoric wildfires destroyed between 4.5 million and 11.9 million acres a year. When Juan Cabrillo dropped anchor in San Pedro Bay in October 1542 (the height of the Santa Ana fire season), he promptly named it the “Bay of Smoke.”

Our modern sensitivities reel at the devastation of the Camp Fire, which recently incinerated 153,000 acres, wiped out the entire town of Paradise, and claimed at least 86 lives. Yet in 1910 the “Big Burn” in Idaho and Montana consumed three million acres, wiped out seven towns, and killed 87 among a far smaller and sparser population.

The U.S. Forest Service had formed only five years earlier, driven by scientific breakthroughs in the understanding of forest ecology. The first wave of American conservationists didn’t watch helplessly as the cycle of catastrophic overpopulation followed by catastrophic wildfire wiped out entire forests. Instead, they believed, management could keep forests healthy and resilient for generations.

Excess timber comes out of a forest in two ways—it gets carried out or burned out. For much of the 20th century, harvesting excess timber produced thriving forests by matching tree density to the ability of the land to support it. Foresters designated surplus trees, and loggers bid for the right to remove them at auction, with the proceeds going to the U.S. Treasury. These revenues were then put back into forest management and shared with local communities.

What went wrong? In the 1970s, Congress passed a series of laws subjecting federal land management to time-consuming and cost-prohibitive environmental regulations. Instead of generating revenues, forest management now costs the government money. As a result, timber harvested from federal lands has declined 80%, while acreage destroyed by fire has increased proportionally.

A half-century of environmental regulation hasn’t helped the forests thrive. A typical acre in the Sierra can support roughly 80 mature trees, but the current density is more than 300 trees. A single fully grown tree can draw 100 gallons of water from the soil on a hot day. Drought kills overcrowded forests quickly.

The environmental left blames climate change. Yet this doesn’t explain the dramatic difference between federal lands and private forests that practice scientific forest management. The boundary lines can often be seen from the air because of the condition of the forests. How clever of the climate to decimate only the lands hamstrung by these environmental laws.

Decaying or burning forests make a mockery of laws aimed at reducing carbon emissions. Wildfires in the U.S. pump an estimated 290 million tons of carbon dioxide into the air every year. Healthy, growing forests absorb it. Milling surplus trees sequesters their carbon indefinitely and renews the forest’s ability to store still more.

Today’s environmental laws have restored the old normal, making drought, disease, pestilence and fire a constant scourge of our forests. A healthy forest that is maintained and preserved for the enjoyment of future generations is an abnormal condition produced by modern forest management. Ironically, in the name of improving the environment, we have surrendered our forests to a policy of neglect, which, as it turns out, isn’t benign.

We are looking to acquire something in jobs, real estate, matrimony or education: Hitesh Oberoi, Info Edge India