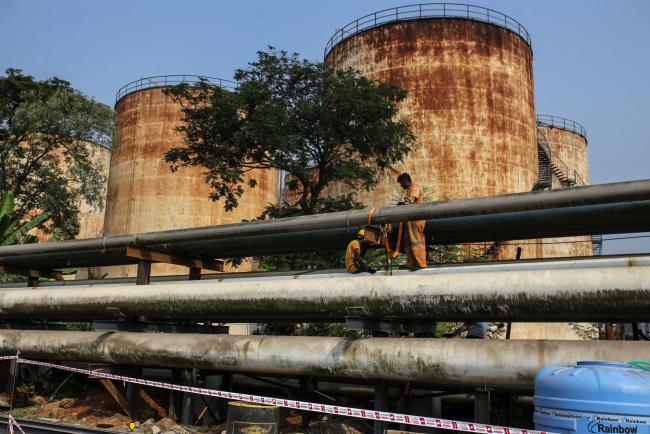 © Bloomberg. Workers labor near fuel pipelines and oil storage tanks at the Jawaharlal Nehru Port in Navi Mumbai, Maharashtra, India, on Sunday, Nov. 14, 2021. Congestion at many of the world’s major ports offered a snapshot of supply chains trying to avoid unprecedented bottlenecks, as cargo handlers searched for the quickest way to route goods through the clogged arteries of global commerce. Photographer: Dhiraj Singh/Bloomberg

(Bloomberg) — The OPEC+ group of oil producers may adjust its plans to raise production next month if consuming countries go through with a coordinated release of strategic petroleum reserves, according to delegates.

India became the latest major consumer to contemplate deploying its stockpiles,  government officials said Monday, potentially assisting the U.S., Japan and even China in a move to assuage the inflationary threat of higher energy costs. The U.S. has sought to persuade consumers to open their reserves after OPEC+ declined to speed up production increases earlier this month.

Some OPEC+ countries are unhappy about the use of state reserves, designed to be deployed in an emergency, to cool this year’s rally in prices, the delegates said, declining to be identified because the discussions are private.

OPEC+, led by Saudi Arabia and Russia, meets next week to discuss plans to increase production by an additional 400,000 barrels a day in December.