Tests on take-out containers used in the hot food and salad counters found that 80 per cent were treated with harmful chemicals called PFAS.

PFAS have been linked to liver damage, damage to the immune system and cancer. They are used to treat many industrial items including paper, furniture, carpets and clothing.

Trader Joe’s was the only chain which showed no signs of PFAS in their packaging.

‘It’s time for our nation’s leading grocery stores to take the toxics out of their packaging,’ Mike Schade, from Safer Chemicals Healthy Families, who conducted the study, said. 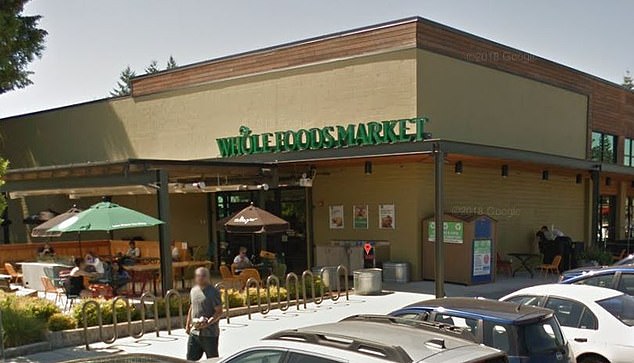 Packaging at healthy supermarket Whole Foods in the US contains the most harmful chemicals, a watchdog investigation into five major US grocers reveals. Tests on the store’s take-out containers used in the hot food and salad counters found that 80 per cent were treated with harmful PFAS

In response, Whole Foods, owned by Amazon, has removed all the prepared foods and bakery packaging highlighted in the report in the US, UK and Canada.

The healthy supermarket chain tested positive for a total of five of the 17 samples.

Overall, 13 per cent of all packaging samples tested were likely to be treated with PFAS, the study by advocacy groups Safer Chemicals Healthy Families, a coalition of 450 organisations, and Toxic-Free Future found.

‘PFAS are a class of industrial chemicals put in consumer products to repel grease, water, and stains, and they are also used in some firefighting foams,’ the report said.

The study tested 78 samples collected from 20 stores in 12 states.

Of those, ten were likely to have been treated with PFAS, officially called perfluoroalkyl compounds.

Whole Foods was the worst offender, with 29 percent of packaging likely to be treated with PFAS. This was followed by Ahold Delhaize (parent of Food Lion, Stop and Shop, and Hannaford) at 14 percent, Kroger at 11 percent, Albertsons at six per cent and Trader Joe’s in last position, with 100 percent PFAS free packaging.

The most common types of packaging were take-out and bakery or deli packaging.

The researchers note that although the sample size is small, and many samples came back as PFA free, take-out containers are widely used.

‘In other words, PFAS use in a single item type, found in multiple stores across the country, can translate into large quantities of PFAS-treated paper used and disposed of,’ the report said.

READ  The bladders made from other body parts

Ahold Delhaize (parent of Food Lion, Stop and Shop, and Hannaford) tested positive for PFAS in 14 percent of its samples

TOXIC PFCs ARE IN WATER SUPPLY OF MILLIONS OF AMERICANS

More than six million people in the US drink and use water that is contaminated with deadly toxins, a study revealed in 2016.

Life-threatening concentrations of carcinogenic man-made chemicals PFASs, a type of PFC, were found in public water tanks across America.

The chemical is normally used to fight fire, insulate pipes, and stain-proof furniture.

The Harvard University study warned the figures are likely underestimates, since government data does not account for a third of the country – and therefore omits around 100 million people.

PFASs have been used over the past 60 years in industrial and commercial products ranging from food wrappers to clothing to pots and pans.

They have been linked with cancer, hormone disruption, high cholesterol, and obesity.

Safety officials have yet to find a way to remove PFASs from wastewater by standard treatment methods.

PFAS come in hundreds of forms and are widely used to make everyday products more convenient and longer-lasting.

They are only beginning to be understood by scientists, despite being widely studied.

Studies have linked the chemical to the increased risk of cancer, according to the Agency for Toxic Substances and Disease Registry, part of the United States Department of Health and Human Services.

The authors of this new study say that the research builds upon previous studies which found that microwave popcorn bags, many fast food wrappers, and disposable items such as plates and bowls are likely to be treated with PFAS.

Considering many samples were free of PFAS treatment, such as Trader Joe’s, the researchers say it is clear alternatives are widely available.

While the majority of products tested were PFAS-free, some of the items found to have likely PFAS treatment, such as take-out containers, are very widely used.

In response to the findings, Whole Foods said: ‘Whole Foods Market introduced compostable containers to reduce our environmental footprint, but given new concerns about the possible presence of PFAS, we have removed all prepared foods and bakery packaging highlighted in the report.