Patients who can’t eat solid foods have told how they are fearing for their lives amid the national shortage of intravenous fluids.

Part of the production of liquid food at a large-scale company was shut down in June because dangerous bacteria was detected there.

But it has left scores of patients who rely on the bags of liquid feeling sick, dizzy and tired.

For the time being, they are using alternatives provided by the hospital which are not tailored to their own needs.

The NHS earlier this week declared the issue as a ‘national emergency’, as ‘several hundred’ patients in England and Wales have seen their deliveries disrupted. 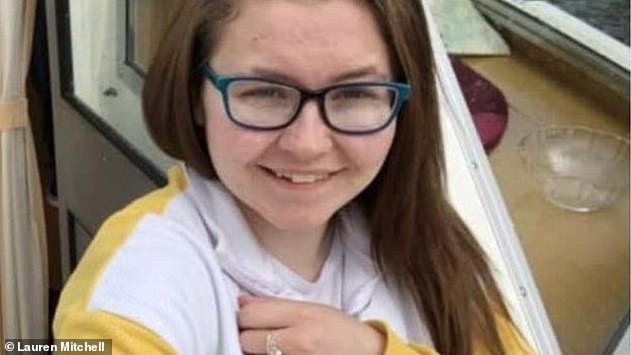 Lauren Mitchell, 21, from Stansted, said she was feeling sick since her liquid food was suspended amid a national shortage of intravenous fluids 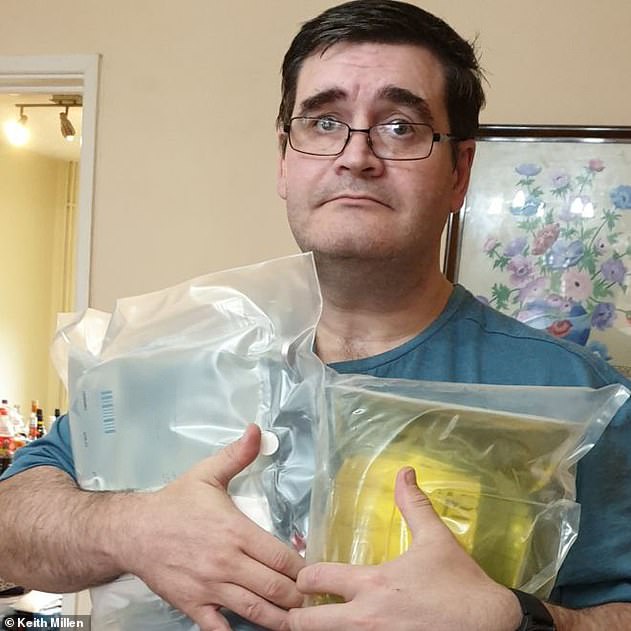 Keith Millen, 48, whose supply also stopped, said he was ‘petrified’ for his life. He is pictured holding a supply of intravenous nutrition at his home in Bridgend

The injected TPN contains all the nutrients a person needs to survive, including fats, protein, carbohydrates, sugars and vitamins and minerals.

Lauren Mitchell, 21, from Stansted, Essex, told BBC News she had used TPN since she was seven years old.

She was born with chronic intestinal pseudo-obstruction, whereby her digestive system muscles aren’t able to push food through to the stomach.

WHAT IS PARENTERAL NUTRITION?

Parenteral nutrition, also known as intravenous nutrition, is feed which people have injected directly into their veins.

It comes in the form of a fluid which contains water, protein, carbohydrates, vitamins and minerals, fats and other vital nutrients.

Parenteral nutrition is given to bypass the digestive system in patients who cannot properly absorb nutrients from gut.

Conditions which may cause this include short bowel syndrome, a bowel obstruction, pancreatitis or a gastrointestinal fistula – a hole in an organ.

Parenteral nutrition may be given to people of any age, and some people only need it for a short time to get over an illness, while others may have to keep using it for years.

Six weeks ago, the delivery of her TPN was late, and then she stopped being supplied TPN at all. Her TPN is manufactured by the company Calea.

In June, the medicines safety body – the Medicines and Healthcare Regulatory Agency – shut down the manufacturing site in Runcorn, Cheshire.

After an inspection, the MHRA found bacterial contamination in the production area which presented a potential risk to patients.

The bacteria, Bacillus cereus, ‘are known human pathogens, which is of particular concern for the many vulnerable patients receiving parenteral nutrition’, the MHRA said in a statement.

No contaminated bags were discovered but the MHRA, but the manufacturing process has been halted until the problem is rectified.

Calea sources said it had stopped supplying 511 of its patients, chosen based on the level of medical reliance on the pouches.

Two weeks ago, Ms Mitchell’s account with Calea was ‘suspended’, and she has since been receiving an ‘off the shelf’ alternative like hundreds of other patients.

These bags of liquid feed are not tailored for her specific dietary needs, which vary between patients.

Ms Mitchell, who said the problem was a ‘national crisis’, said: ‘My life is in a lot of danger right now.

‘If diabetics’ insulin was taken away, then there would be uproar – but because no-one knows what TPN is, no-one’s bothered and no-one knows how serious this is.

‘This is our lives on the line here and we need answers and something to be done about it.’ 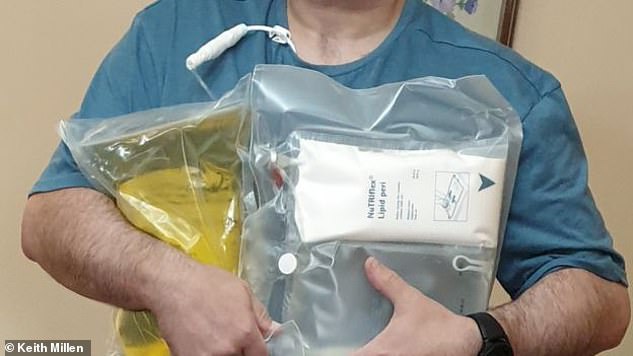 According to the Celea source, normal service of production would not resume until ‘towards the end of the year’.

The news is ‘petrifying’ for Keith Millen, 48 from Bridgend, who was also using TPN until Celea production slowed.

He has a fistula which means food ‘pours straight out’ of his digestive system.

He told BBC News: ‘For 10 days I had nothing, all I had to go on were litre bags of saline [salt water].

‘There was nothing, no explanation.’

‘It’s petrifying, it’s so scary… I’ll die, I know it sounds dramatic but they’re playing around with what I need to survive.’

Mr Millen has been left feeling exhausted and all he could do was sleep.

His doctors eventually managed to get him on the limited list of patients Calea is still manufacturing the nutrition replacement bags for.

Letters shared by NHS England with the Health Service Journal reveal the issue has become a national emergency.

The HSJ claim the NHS is considering importing supplies from other countries because the need for TPN is so serious.

A Calea representative said: ‘Supplying patients is Calea’s number one priority and we apologise to patients and their families for the distress caused.

‘We are fully committed to… return to usual and reliable supply levels as quickly as possible during this challenging period.’

WHY IS THERE A SHORTAGE OF TPN?

In June, Calea, a firm based in Runcorn in Cheshire, was told it wasn’t meeting standards set by the Medicines and Healthcare products Regulatory Agency (MHRA).

As a result it had to immediately change the way it makes the feeding bags, which has delayed the deliveries to ‘several hundred’ patients in England and Wales.

The MHRA had found the way the company was adding vitamins and elements to the bags was not in line with national requirements.

The MRHA, which regulates all devices used by doctors in the UK, said no defective items had been found so far and that the move was a precaution.

A spokesperson said: ‘MHRA performed a routine inspection of the Calea UK site in Runcorn.

‘Problems were identified with the design of the manufacturing process that did not meet the requirements of guidance previously published by MHRA.

‘Calea have reduced their output while they make necessary changes to the manufacturing process.

‘The MHRA are supervising these changes through regular correspondence and weekly inspection visits.

The changes to production are a precautionary, but necessary, measure to ensure product safety is maintained.’

East Kent baby deaths: 'It felt like a murder charge'

'I will need another cruise to get over this': Brit on the coronavirus ship jokes about his ordeal

Vitamin B12 deficiency symptoms: Unusual sensation that affects mobility could be a sign

Dear Coleen: Should I leave kind hubby to find a passionate partner?

After Painful 2018, Chinese Blockchain VCs Are Getting Back Into the Market – Yahoo...

Type 2 diabetes: How to reduce the risk of developing the condition