The boss of one of Britain’s biggest car dealers is preparing to make drastic changes to its business model after the coronavirus crisis slammed the brakes on the industry.

Bill Berman, who became chief executive of troubled Pendragon in February, is drawing up plans that may include refinancing and the closure of showrooms across the country – even as they begin to reopen from tomorrow.

It comes amid predictions that new car sales won’t bounce back as lockdown is eased. 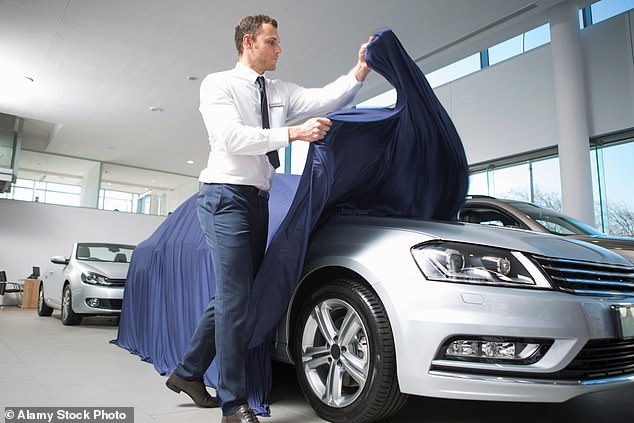 Change of direction: Sales may take years to reach pre-coronavirus levels, making many dealerships too costly

Figures released earlier this month showed that there were just 4,321 new car sales in the UK in April, compared with 161,064 in April last year, due to the lockdown that forced dealers to close their doors. Now the industry fears that recovery to pre-coronavirus levels may take years because of the economic turmoil, with families putting off spending on big items.

Its announcement came just hours after Nissan said it would close its factory in Barcelona with the loss of about 2,800 jobs, sparking protests outside the site. The Japanese company promised to keep its factory in Sunderland open.

‘I think the pie is going to be smaller as we come out of this. There will be fewer cars sold

Berman is bracing himself for a prolonged slump and says the changes that Pendragon needs to make depend on how slow sales are after showrooms reopen.

He added that car manufacturers are also likely to cut costs by reducing the number of models and their variants on offer and focusing on their more profitable models.

‘I think the pie is going to be smaller as we come out of this. There will be fewer cars sold. What we’re trying to do is use our existing physical footprint and digital capabilities to get a bigger slice of that smaller pie,’ he told The Mail on Sunday.

Pendragon operates six brands, including Evans Halshaw, which sells vans and lorries, as well as cars, Stratstone, which holds the franchise to sell and service ten marques including Aston Martin, and Quickco, which deals with vehicle parts.

It is reopening 141 of its 173 dealerships and showrooms tomorrow, having been given the green light by No10.

Its showrooms will introduce safety procedures including temperature checks for staff and fewer cars in showrooms, see right.

However, Berman warned that some showrooms may never reopen, while others could close permanently further down the line if sales fail to rise as lockdown ends.

‘We’re going to let the business dictate how fast we open the stores and which get to open,’ he said.

‘Because of the economic damage from this pandemic and this changing model, not all stores will open. This isn’t a Pendragon statement, this is a general statement.

‘Our plan is ultimately to open all the stores, but if business is off by 30 per cent we may have to look at our current business model and footprint and adjust accordingly.’

The boss of Pendragon, which is listed on the London Stock Exchange’s main market, added: ‘Some of the smaller players out there don’t have the cash resources that some of the bigger players do. Not everybody’s going to survive.

‘Before the pandemic Ford was talking about [closing] several hundred of their dealerships and I can see other brands doing something similar.’

Berman said Pendragon would consider financing options including raising capital from investors or a debt refinancing, depending on the scale of the decline.

We’re going to be able to weather the storm. Now what I worry about is: will business be down 20 per cent or 50 per cent?

‘We’re in a good financial position right now. We’re going to be able to weather the storm,’ he said.

‘Now what I worry about is: will business be down 20 per cent or 50 per cent? Is there a second wave and do parts of the country get locked down again?

‘When we see what the new business model looks like and what the sales are like, then we’re going to look at all those things.’ He added:

‘When we come out of this we’re going to look at all avenues whether that’s a capital raise through shareholders or increased borrowing or a combination thereof. We’re going to explore all those avenues and see what suits the company best at that time.’

Pendragon was struggling even before Berman, an American, was parachuted in to engineer a change in fortune for the company, whose share price has slumped in recent years. Berman wrote to the chairman of Pendragon’s rival Lookers shortly after he became chief executive to explore a potential merger, but was turned down.

However, he still appears open to a potential deal with Lookers or another company. He said: ‘We’re locked out of talking to them for six months, unless they initiate it. If they said ‘we’d like to have a conversation’, of course I’d take the phone call but I am not actively looking to merge with anybody.’

‘The big need to get bigger. I can definitely see groups combining and looking to share synergies – maybe improving their economies of scale.’

No test drives with salesmen – and bring you own water

Car dealers have spent the past two months drawing up plans to make their showrooms safe.

Pendragon’s dealers, which include the Evans Halshaw and Stratstone showrooms, urge buyers to make appointments to control the number of people in a showroom at one time.

A member of staff will greet customers at the door and in some stores they will follow floor markings designating a one-way route to keep them apart from other groups. Furniture will be cleaned regularly.

Unaccompanied test drives are off the agenda – in most cases customers will be allowed to take cars out for a spin on their own, rather than with a member of staff.

Will PCR tests for an amber list holiday really cost my family £1,000?