Pomegranate juice could protect the brains of babies who are growing too slowly in the womb, study finds

Researchers found that drinking eight ounces of pomegranate juice daily boosted the brain connectivity of babies who were not growing at a normal rate inside the womb.

This is because pomegranate juice is loaded with micronutrients called polyphenols that cross the blood-brain barrier and have been proven to protect against neurodegenerative diseases.

The team, from Brigham and Women’s Hospital in Massachusetts, says this could prevent the need for more invasive treatments – such as surgery – after the baby is born. 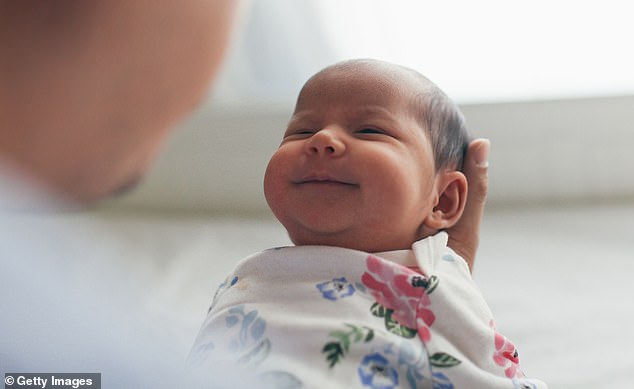 For the study, published in PLOS One, the team looked at 78 mothers from Barnes-Jewish Hospital obstetric clinic in St Louis, Missouri.

Their babies had been clinically diagnosed with intrauterine growth restriction (IUGR) between 24 and 43 weeks’ gestation.

This occurs when babies fail to grow at the expected rate they should in the womb.

The most common cause is an issue with the placenta – which delivers oxygen and nutrients to a baby via the umbilical cord – when it is either not attached properly or not working properly.

Because the baby is not receiving enough blood or oxygen, he or she can experience trouble breathing, have heart and blood vessel problems or suffer serious brain damage.

IUGR affects between three and 10 percent of all pregnancies, according to the University of San Francisco Benioff Children’s Hospital.

Some of the women received eight ounces of pomegranate juice daily while the remainder received a placebo that tasted the same and had the same number of calories.

Researchers then measured several areas of brain development among the babies of both groups.

No differences were found in the brain’s overall structure, but the babies whose mothers drank pomegranate juice had better development in the structure of white matter – the tissue through which messages pass within the central nervous system.

These babies also had brain connectivity than the babies from the placebo group.

The team believes this is because pomegranate juice contains polyphenols, antioxidants found in several foods and beverages such as berries, nuts and tea.

Past studies have found that polyphenols improve cognitive function and protect the brain from neurodegenerative diseases.

‘These measures tell us about how the brain is developing functionally,’ said senior author Dr Terrie Inder, chair of the department of pediatric newborn medicine at Brigham and Women’s Hospital.

‘We saw no difference in brain growth and baby growth, but we did see improvement in cabling network and brain development measured by synchronous blood flow and visual development of the brain.’

A second clinical trial is underway with hope of replicating the findings on a larger scale.

Coronavirus MAPPED: These are the 11 countries infected – ‘critical’ NHS is ready

Anti-depressant spray not recommended on NHS

Rachel Clements: Mother of three who blogged about her lung illness dies at 30

'She can't say no': the men who take breast milk from babies

Couple expecting baby girl stunned to discover they were in fact having a BOY...

Father-of-two gave himself a stroke by cracking his neck so hard he tore an...

Restaurants shouldn't be allowed to offer sweet treats as part of a fixed-price menu...