We get into the heart of the Q4 earnings season this week, with almost 400 companies on deck to release quarterly results, including 139 S&P 500 members. We have had a good run this earnings season thus far, with decent momentum on the revenues side and an above-average proportion of companies beating top-line estimates.

While the number of companies beating EPS estimates is tracking below other recent quarters, the tone and substance of management guidance and commentary is by and large favorable and reassuring, which is helping sustain estimates for the current and coming quarters. In fact, estimates for full-year 2020 have actually nudged up in the last few weeks.

The sector experienced earnings declines in the first three quarters of 2019. Ahead of this earnings season, the expectation was for continuation of that trend in Q4 as well. While Q4 earnings for the sector are still expected to be below the year-earlier level, the expected decline has roughly halved following the impressive Intel (INTC – Free Report) showing.

A big part of Intel’s outperformance came from the chip maker’s datacenter business, which not only has favorable read-throughs for the semiconductor space as a whole, but likely also Microsoft and Amazon that are leaders in the cloud-computing space.

The semiconductor industry, which accounts for almost a sixth of the Tech sector’s total earnings, has been in a cyclical funk in recent quarters that has been dragging down the entire sector. As you can see in the chart below of quarterly earnings growth for the chip industry, the year-over-year declines have started decelerating already, with a 2019 Q4 earnings decline of -16.5% representing an improvement over the preceding three quarters. 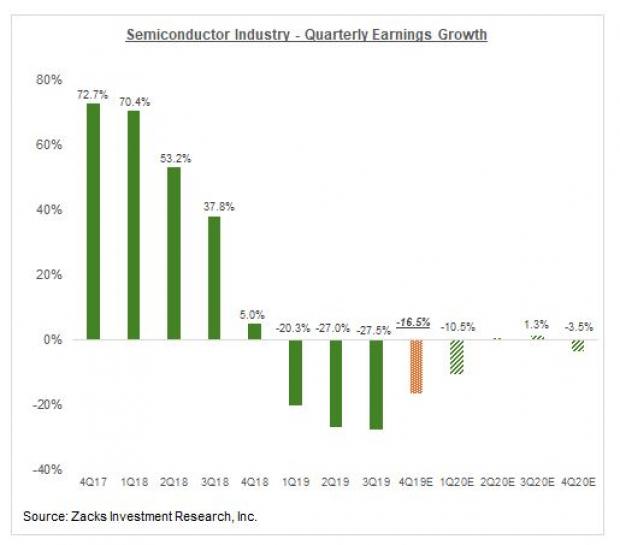 As you can see in the above chart, the industry isn’t expected to get back into any significant growth phase in the next few quarters. But at least it will stop being a drag on the Tech sector a whole, which should help the aggregate growth picture for the S&P 500 index. After all, the Tech sector is the biggest earnings contributor in the S&P 500 index, expected to bring in roughly 24% of the index’s total earnings over the coming four quarters. It will be interesting to see if the Advanced Micro Devices (AMD – Free Report) earnings report on Tuesday will also reflect what we saw in the Intel report.

Total Tech sector earnings are expected to decline -2.8% from the same period last year on +4.2% higher revenues. This would follow the -7% decline in the sector’s earnings in the preceding quarter on +2.4% higher revenues. 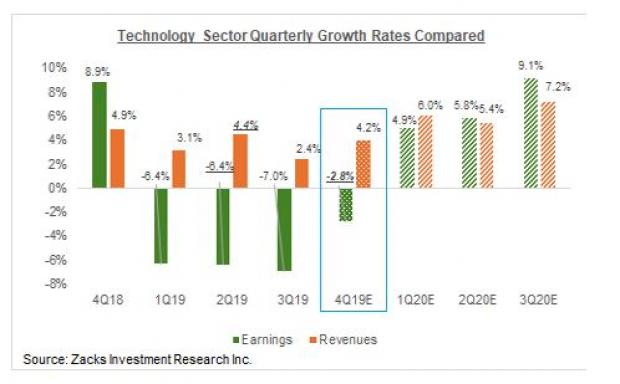 As you can see in the above chart, the sector’s earnings growth picture is expected to notably improve in the current period (2020 Q1), with growth turning positive in Q1 and ramping up in the following quarters.

For the 85 S&P 500 members that have reported Q4 results already, total earnings or aggregate net income is down -0.2% from the same period last year on +3.4% higher revenues, with 70.6% beating EPS estimates and 72.9% beating revenue estimates.

The comparison charts below put these results in the context of what this same group of 85 index members have been reporting in other recent periods. The first set of charts compare the beats percentages while the second set does a similar comparison for Q4 earnings and revenue growth rates.

For the Finance sector, we now have Q4 results from 48.5% of the sector’s total market cap in the S&P 500 index. Total earnings for these Finance companies are up +0.9% from the same period last year on +5.6% higher revenues, with 69.7% beating EPS estimates and 81.8% beating revenue estimates.

The charts below put the sector’s Q4 results in a historical context:

The aforementioned revenue momentum is very much visible in the Finance results, as you can see if you focus just on the orange bars in the above charts.

Q4 Expectations for the S&P 500 Index

Looking at Q4 expectations as a whole, combining the actual results that have come out with estimates for the still-to-come companies, total earnings (or aggregate net income) for the S&P 500 index are expected to be down -2.6% from the same period last year on +3.7% higher revenues, with 9 of the 16 Zacks sectors expected to have lower earnings than the year-earlier period.

The table below shows the summary picture for Q4, contrasted with what was actually achieved in the preceding earnings season. 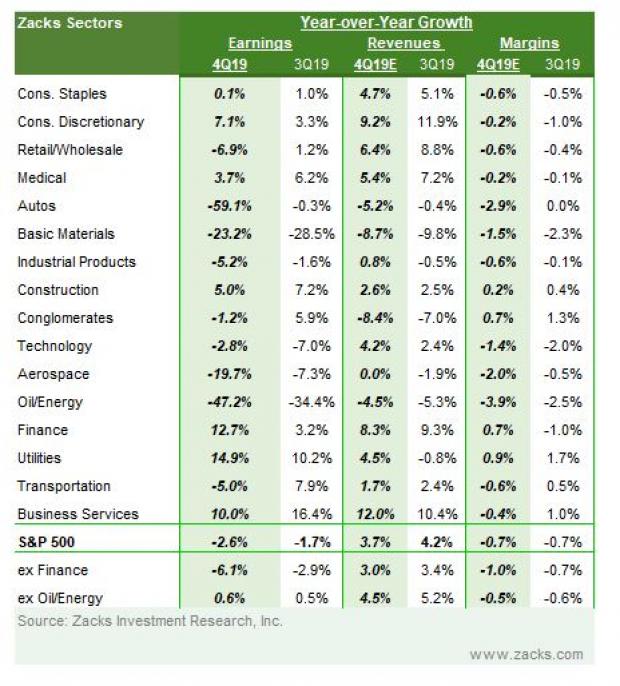 The chart below shows Q4 earnings and revenue growth expectations contrasted with what is expected in the following four quarters and actual results in the preceding 4 quarters. As you can see, the growth pace is expected to start improving from next quarter onwards. 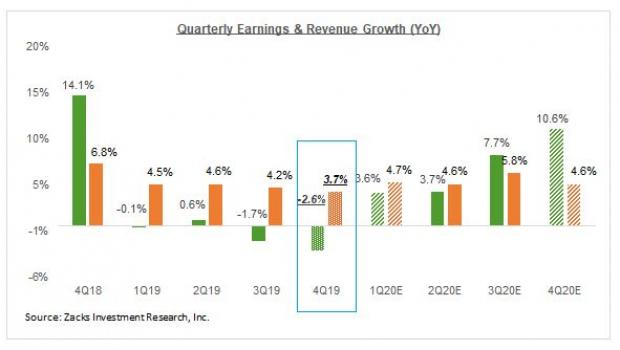 The chart below shows the earnings picture on an annual basis. As you can see, growth is expected to resume in 2020 and continue the following year, after the modest decline in 2019. 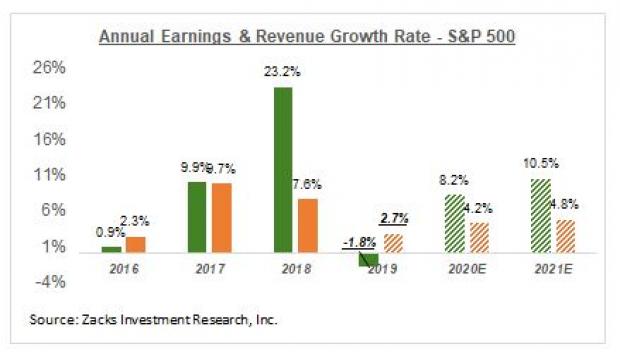 The way 2020 Q1 and full-year 2020 expectations evolve in the coming weeks and months will depend to a large extent on management guidance and commentary as 2019 Q4 results come out.

Looking for Stocks with Skyrocketing Upside?

Zacks has just released a Special Report on the booming investment opportunities of legal marijuana.

Ignited by new referendums and legislation, this industry is expected to blast from an already robust $6.7 billion to $20.2 billion in 2021. Early investors stand to make a killing, but you have to be ready to act and know just where to look.

AI is not just another technology project

Synaptics (SYNA) Stock Sinks As Market Gains: What You Should Know – Zacks.com

Wildcats season comes to a an end – Examiner Enterprise