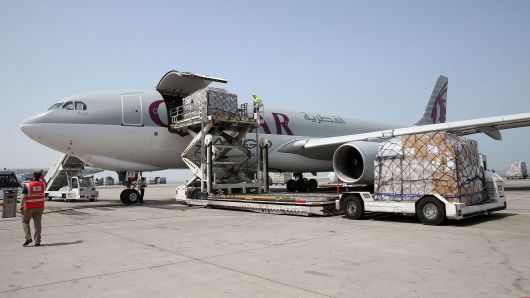 Workers offload cargo from a Qatar Airways Cargo plane at the Hamad International Airport in Doha on July 20, 2017.

More than 20 months after the economic and diplomatic blockade enacted by its neighbors Saudi Arabia, Bahrain, Egypt and the United Arab Emirates, Qatar is endeavoring to tell the world that business is carrying on as usual.

The tiny gas-rich monarchy has expanded its trade relations after the blockade effectively cut its access to an estimated 60 percent of the goods it imported.

The countries who implemented the blockade charge Qatar of supporting terrorism, which the Qataris strongly deny.

Speaking at a forum on Qatar-Pakistan trade, Minister Ali Al Kuwari said trade between the two countries grew over 230 percent in 2018 to $2.6 billion, Reuters reported Sunday. Trade with Iran and Turkey has also increased, while Doha is pursuing partnerships with Western countries, including an open skies agreement with the EU which will be the first between the bloc and any Gulf Cooperation Council state.

The blockade has had an impact on air travel, shipping and trade routes and media, among other sectors.

However, the economic impact of the blockade has been seen as short-lived, the International Monetary Fund said last May. This is helped by the fact that Qatar is the world’s top exported of liquefied natural gas. The IMF forecasts 3.1 percent growth in 2019 for the country of 2.6 million, up from 2.4 percent last year.

Qatar’s stock exchange surged over 20 percent in U.S. dollar denominated terms in 2018. The small Gulf state officially left OPEC on January 1, ending a membership which had stood for more than half a century.

OECD says coronavirus is another reason to boost fiscal stimulus

'If peace comes': Afghans dream of life after war

ABT Stock: Is It A Buy Right Now? Here’s What Earnings, Abbott Stock Chart...

‘It was morally wrong’: the plot to abandon a man 5,000 miles from home