News articles about Raymond James (NYSE:RJF) have trended positive this week, according to InfoTrie Sentiment. InfoTrie identifies positive and negative press coverage by monitoring more than six thousand news and blog sources in real time. The firm ranks coverage of publicly-traded companies on a scale of negative five to five, with scores closest to five being the most favorable. Raymond James earned a media sentiment score of 2.86 on their scale. InfoTrie also gave media stories about the financial services provider an news buzz score of 6 out of 10, indicating that recent press coverage is somewhat likely to have an impact on the company’s share price in the next few days.

These are some of the media headlines that may have impacted Raymond James’ score:

Raymond James (NYSE:RJF) last announced its quarterly earnings results on Wednesday, April 24th. The financial services provider reported $1.81 earnings per share (EPS) for the quarter, beating analysts’ consensus estimates of $1.67 by $0.14. The firm had revenue of $1.86 billion for the quarter, compared to the consensus estimate of $1.86 billion. Raymond James had a return on equity of 15.90% and a net margin of 12.90%. The company’s quarterly revenue was up 2.6% on a year-over-year basis. During the same period in the prior year, the company posted $1.63 earnings per share. On average, sell-side analysts expect that Raymond James will post 7.47 EPS for the current year.

The company also recently disclosed a quarterly dividend, which will be paid on Monday, July 15th. Shareholders of record on Monday, July 1st will be issued a dividend of $0.34 per share. The ex-dividend date of this dividend is Friday, June 28th. This represents a $1.36 annualized dividend and a yield of 1.69%. Raymond James’s payout ratio is currently 21.02%.

Raymond James Financial, Inc, a financial holding company, through its subsidiaries, engages in the underwriting, distribution, trading, and brokerage of equity and debt securities, and the sale of mutual funds and other investment products in the United States, Canada, Europe, and internationally. The company operates through Private Client Group, Capital Markets, Asset Management, RJ Bank, and Other segments. 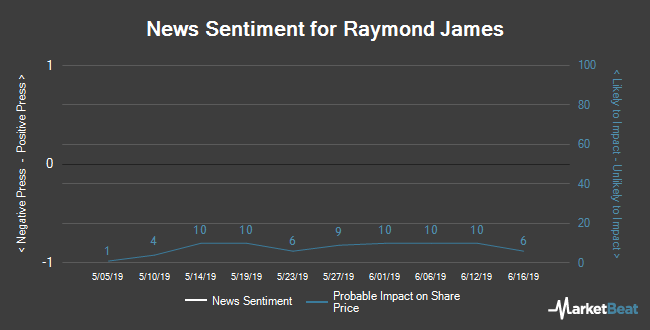