The release of the Samsung Q series QLED smart tv prompts the company to refresh its soundbar systems to the same Q prefix moniker. Today, we will take a look at the mid-range Samsung Soundbar Q70R.

Setting up the Q70R is relatively easy, just connect the individual power cables to the soundbar as well as the woofer unit. As both of them are communicating wirelessly, there’s 1 less cable to worry about and that makes the speaker arrangement way easier.

As for the audio input, instead of an auxiliary, the soundbar unit takes in digital audio:

I have used HDMI (TV-ARC) as the primary connection to the TV throughout the review session. Meanwhile, Bluetooth for mobile. 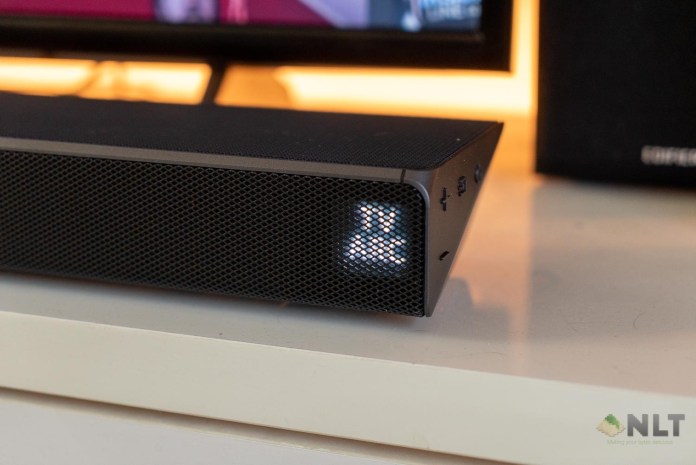 The Q70R soundbar doesn’t seem to be that intimidating especially with its minimalist design – fully grilled front and top panel with simple Samsung & harman/kardon branding. You might not even notice there’s an LED display at the front. Since there’s a 3 seconds timeout for the display, it won’t be an eyesore, just that you won’t know if your soundbar is actually turned on or off.

You can either mount the soundbar on the wall using the included wall mount bracket or just leave it on the TV console. Do keep in mind some TVs have their IR sensor at the bottom of the TV bezel which could be blocked by the soundbar. 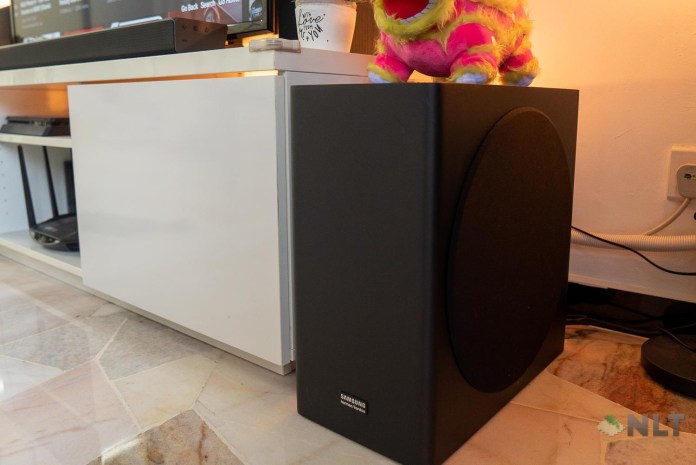 The subwoofer unit has an even simpler design where the cloth grill for the side-firing 8-inch driver is protruding slightly from the right side.

The remote control has a curvy profile for better ergonomics. The buttons have a shallow travel distance with solid clicks, much like those micro-switches with membrane buttons. 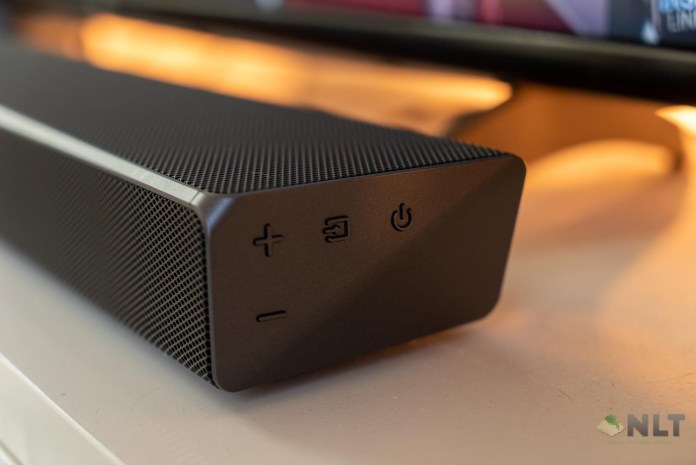 Physical controls can be found on the right side of the soundbar – power on/off, volume up, volume down and source select. 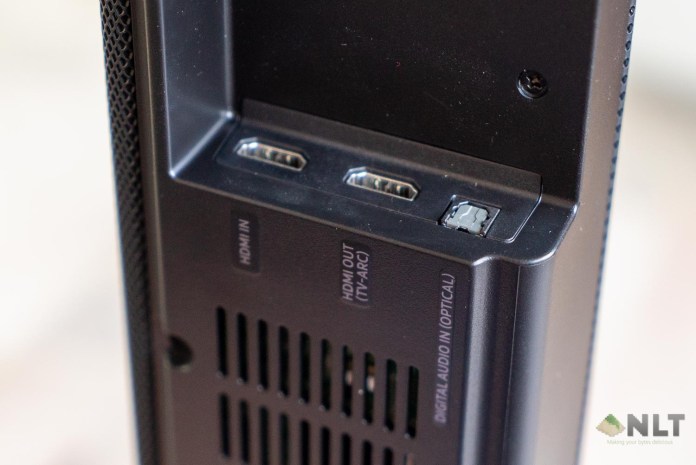 In terms of the physical IO, the Q70R soundbar supports: 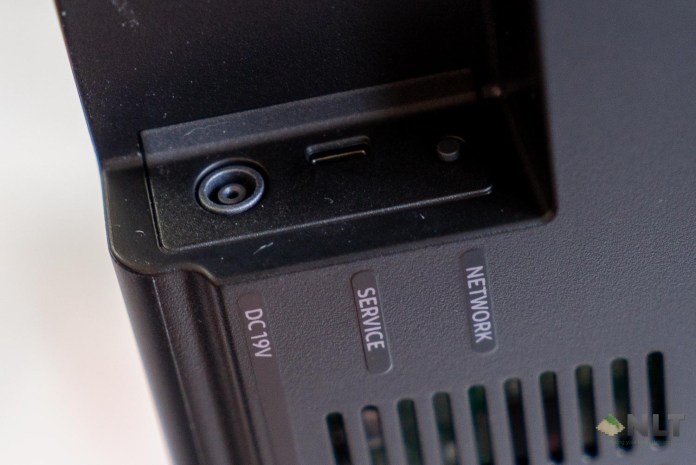 On the other side is the maintenance panel:

The HDMI 2.0 output supports Audio Return Channel (ARC) which means you don’t need another cable to redirect the audio signal to the soundbar. A user can connect from the source to the soundbar through HDMI In then connect another HDMI cable from HDMI Out to the TV and everything will work normally. In this configuration, you won’t need to sacrifice one HDMI port just for audio.

This passthrough will even support up to 4K resolution with HDR+. 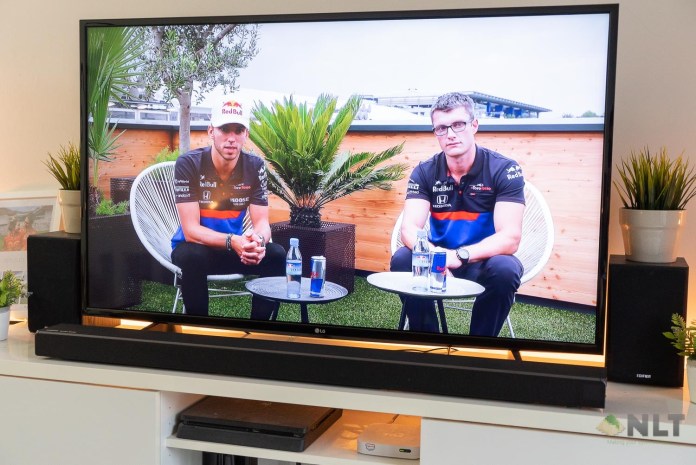 The soundbar has gone through various use cases such as movies, music and games. What I think the soundbar really shines is its sound production despite being a relatively small form factor.

The 3.1.2 channel setup might sound confusing at first but allow me to break it down to you:

READ  The art of Skype set-dressing: how to video-call the office when in quarantine | Imogen West-Knights

There you have it, it is not quite a true surround setup because of the lack of rear channels and proper ceiling speakers but at least they can support Dolby Atmos and DTS:X from your Blurays or Netflix streams. Speaking from my personal user experience, the added top-firing speakers do somehow create a better movie-watching experience. Just don’t expect it to instantly turn your living room into a movie theatre because you still need more speakers to complete the true surround setup.

The soundbar has a couple of built-in modes:

Why I think the adaptive mode is the most interesting, for example, during a movie where the actors are having a dialogue, the speaker will enhance the middle speaker for clear vocals. If the scene changes to action scene with gunshots and explosions, it will adjust the bass to push the subwoofer to deliver the punch.

Auto Power Off is Annoying

So far I’m liking the soundbar except for one annoying feature – auto power off. The speaker will turn itself off after not receiving any audio signal for around 15 minutes. Worst of all, it won’t turn on by itself when the audio signal resumes. So, if you decided to pause the video, run some errands, you’ll come back noticing your TV has reverted back to its built-in speaker as the soundbar has turned itself off.

READ  How Google, T-Mobile and HTC got Android off to a crazy, awkward start

I appreciate Samsung’s effort in saving the planet and yes I believe it is alright to set it as enabled out-of-the-box. The problem lies in the missing setting for users to disable it manually. Yeap, you can’t change the timeout nor turn off the feature. Apparently, it is a well-known problem even in their older soundbars if you search “Samsung soundbar auto-off” on Google. 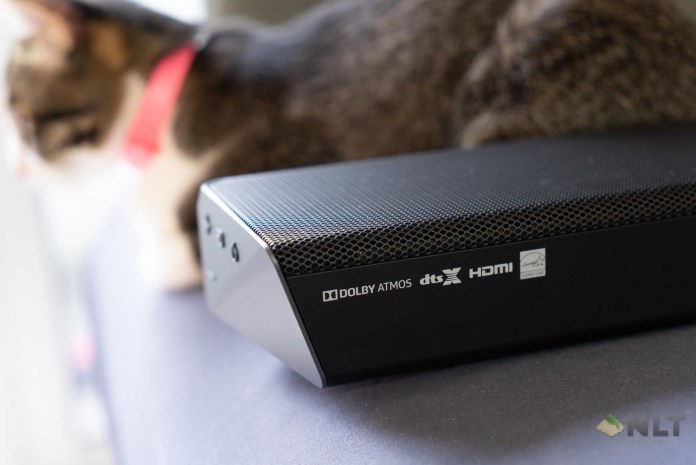 The Samsung Soundbar Q70R system has a solid build and it offers a great sound quality improvement over your TV’s built-in speakers. This system offers exceptional bass, clear vocals and a great entry-level experience for cinematic surround experience, provided if the content outputs the supported audio streams.

Speaking of which, at the official retail price of RM 3,399, the Q70R (3.1.2) is Samsung’s cheapest soundbar that supports Dolby Atmos / DTS:X. The Q80R (5.1.2) retails for RM 4,999 while the top-of-the-line Q90R (7.1.4) goes for RM 6,499. The price is definitely not for the faint-hearted unless you value home theatre experience. Personally, If you really wish to experience a true surround system, you are better off with the Q90R or custom setup. Otherwise, if the virtual surround sound is something you could accept, perhaps the cheaper Q60R (RM 2,599) is something you can look into.