Australian politicians are putting pressure on Rio Tinto to appoint someone from the country as its next chief executive, after the destruction of a 46,000-year-old Aboriginal site sparked a major backlash.

Jean-Sebastien Jacques was forced to quit last week following a backlash after the mining group blew up ancient caves in Pilbara, Western Australia, earlier this year.

The French-born British citizen, 48, will step down at the end of March next year, or when a replacement is found – whichever is earlier. 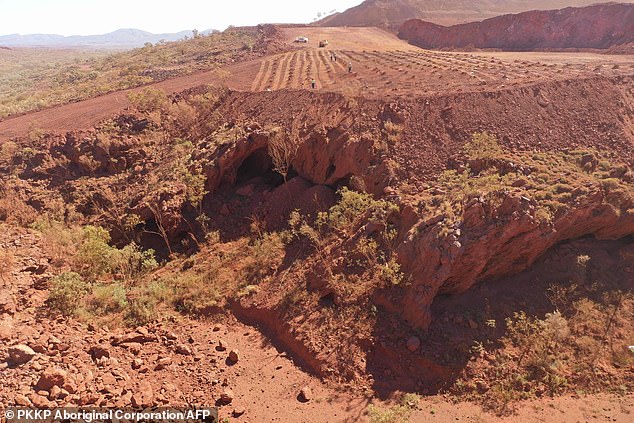 But Australia’s treasury is pushing for Rio to appoint an Australian to lead the Anglo-Australian firm.

Although its corporate headquarters is based in London, the mining group generates the bulk of its earnings in Australia, which has vast iron ore deposits.

Australia’s treasury minister Josh Frydenberg said: ‘Rio Tinto is one of the great companies of the world with a proud Australian history.

‘With the vast majority of its revenue coming from Australia, it is fitting to once again see an Australian as chief executive along with the majority of the board.’

Frydenberg added that he had a ‘constructive conversation’ about the matter with Rio’s chairman Simon Thompson.

The Australian government is pressing to tighten foreign investment rules and protect strategic industries amid concerns over souring relations with China and the impact of Covid-19.

But Rio has also come under pressure from Australian politicians for having too little appreciation of the cultural heritage of the iron-ore rich region of Pilbara, where it generates 90 per cent of its revenues.

Jacques told a parliamentary inquiry into the Juukan Gorge blasts that he was not aware of the cultural significance of the rock shelters until they were blown up on May 24.

Ben Wyatt, treasurer of the Western Australian state government, told Australian media: ‘There’s no one on that board with any real understanding of the Aboriginal groups who own the country on which they operate.

‘That to me screams risk, and it’s something I am stunned hasn’t been picked up over the years.’