The US – and much of the world – has been struck by a series of historic heatwaves this summer, and it’s putting even healthy people at risk, especially when they’re exercising outside, a new Climate Central report warns.

July was the hottest month ever recorded in the US and it sent over 100 UPS delivery workers to hospitals for convulsions, fainting spells and even kidney failure from the extreme heat, NBC reported.

And in much of the South and Southwest of the US, heat indices broke 90 degrees, triggering warnings from the National Weather Service and Centers for Disease Control and Prevention (CDC).

Heat is the leading cause of weather-related deaths, although those fatalities are typically among the sick, elderly or young children.

But on those extreme heat days – which have become far more common in the past 40 years or so, heat becomes a leading cause of death for high school-age children – and a danger to healthy adults who are out in it too long. 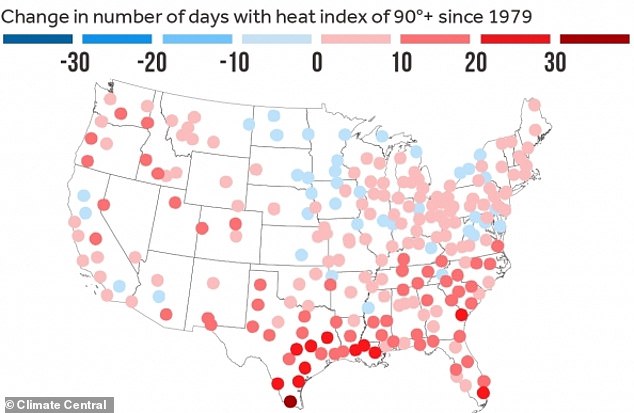 HEAT WAVES ARE SICKENING DELIVERY WORKERS, LEAVING UPS WITH TOO FEW DRIVERS WORKING TOO MANY HOURS

‘I couldn’t even walk to the houses,’ Stephen Nowlin told NBC.

After recovering from a fractured foot, his first day back on the job was in late June.

He thought he’d have an easy route on his first day back, but UPS ended up short-handed, and Nowlin had to pick up the slack.

Suddenly his ‘easy day’ was 177 stops in eight hours of 94 degree heat.

Hardly able to stand, Nowlin luckily had a supervisor with him. The supervisor had to take over carrying packages up to front porches and doors.

When they returned to the UPS distribution center, Nowlin vomited violently, and was told to res a bit in the office’s air conditioning.

All it took was a short walk to the car to trigger the heat illness all over again.

Nowlin made it to the car, but immediately fainted.

After several days trying to stay home sick, being called in and feeling ill all over again

Finally, Nowlin went to a doctor, who diagnosed him with a head injury and heat exhaustion.

Heat illnesses can range from sunburn all the way to heat stroke, a life-threatening condition that can cause fatal brain swelling or permanent damage.

The heat exhaustion that struck Nowlin is just a step below heat stroke.

People are in danger of these higher-grade heat illnesses when they’re exposed to high temperatures for extended periods of time without any breaks – as happened to Nowlin and at least 99 other UPS workers.

The danger is also increased when they they’re particularly physically active – and that’s the warning that Climate Central attached to its recent report.

The organization’s report, released Wednesday, analyzed temperatures in 239 locations throughout the US.

In the vast majority of them – 198 – the number of days when the temperature climbed above 90 degrees has increased over the course of the last four decades.

READ  Three people die of cancer after catching it from SAME organ donor in ‘extraordinary’ one in 10,000 case

‘These extreme heat days are now comprising much of the summer for many cities in the South and Southwest, while areas of the country that had relatively few summer days reach the 90°F heat index in the past are now experiencing weeks of them,’ the report authors wrote.

And more parts of the US are seeing more ‘danger days,’ when heat and humidity combine forces to drive the ‘real feel’ temperature up to 105 degrees.

Almost a dozen US cities have seen increases of four or more average annual danger days since 1979.

EXTREME HEAT CAN BE DANGEROUS TO THE MOST ATHLETIC PEOPLE

High school athletes may feel in shape and equipped to push themselves despite the extreme heat, but even for kids in the best shape, physical activity on a hot day can prove fatal.

According to the new report, 64 football players have died of heat stroke since 1995. Most of them were in high school, although 13 were college players, two were professionals and another two were in organized children’s teams.

‘As climate change threatens to increase high heat index days around the country, athletic trainers, coaches, and medical professionals will need to be educated and prepared to respond to, prevent, recognize, and treat EHI in athletes of all ages,’ the report authors wrote.

That means making sure that players get adequate breaks, stay hydrated and, as some experts are advising, carefully track temperatures and humidity.

‘All that is good in human nature is here’: life and death in a NHS hospice

Type 2 diabetes: The sign in your ear that could signal the chronic condition

How to live longer: The simple exercise that could help increase your life expectancy