Dividends worth £17.6billion have now been axed so far this year as British investors continue to feel the pain from the coronavirus pandemic.

Rolls-Royce, software firm Sage, Ladbrokes Coral owner GVC and Mirror publisher Reach were among the latest to slash investor payouts in an effort to preserve cash.

In just one day, 13 firms suspended or cancelled dividends worth £636million. 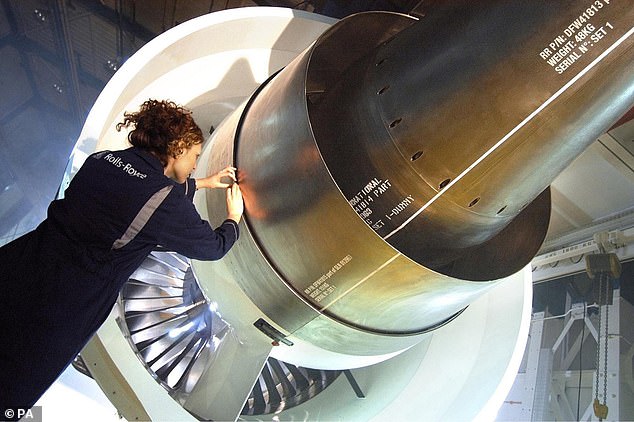 Rolls-Royce, software firm Sage, Ladbrokes Coral owner GVC and Mirror publisher Reach were among the latest to slash investor payouts in an effort to preserve cash

And over in the US, banking titan JP Morgan was considering suspending its dividend for the first time in its 51-year history, saying that it was ‘not immune’ to the coronavirus crisis.

In a letter to investors, its chief executive Jamie Dimon wrote that the board would ‘likely consider suspending the dividend’ in an ‘extremely adverse scenario’ where the US economy contracts by 35 per cent in the second quarter.

He added that while he did not think this was likely, he advised investors to expect lower earnings this year.

Although the US banks have been reluctant to cut their dividends, British lenders suspended payouts worth more than £7.5billion last week, adding to a bloodbath for UK investors.

GVC said it was suspending its £103million payout after the closure of betting shops and cancellation of all major sporting events had ‘significantly reduced revenue’.

It will suspend the payment of its 2019 bonuses and 2020 long-term incentives – sums which in previous years have helped chief executive Kenny Alexander rake in more than £55million since 2016.

Rolls-Royce said it was axing its £137million dividend, while also cutting its executives’ pay by 10 per cent for the year and making them defer another 10 per cent until next year.

It added that its chief executive, Warren East, and chief financial officer Stephen Daintith would also defer their bonuses.

And Reach, which publishes the Mirror and the Express, said its managers would take a 20 per cent pay cut, staff would see 10 per cent slashed off their wages, and those who were furloughed under the Government’s job retention scheme would receive only 80 per cent of their wages.

It had been due to pay a £12million dividend, which it said was ‘no longer appropriate’.

The dearth of dividends will squeeze many investors who rely on the payments for income.

Duncan Burden, of investment consultancy Stamford Associates, said: ‘It is almost certain that more and more companies will cut or suspend dividend payments over the coming months, as a direct reaction to the economic implications of Covid-19.

‘We have already seen more than 100 make announcements to that effect in the past few weeks, from across industry sectors.

‘Prices of FTSE 100 dividend futures contracts suggest the market currently believes approximately 60 per cent of the UK market’s dividends to be at risk in 2020 and 2021.’

The women shaking up wealth management

UK's accidental savers: Poll shows many are better off in lockdown