Ryanair is to slash flight prices by more than half and operate at a loss over the next year in a major attack on struggling rivals, boss Michael O’Leary has revealed.

In a pivotal interview with The Mail on Sunday, O’Leary declared he is launching a ‘pile them high, sell them cheap’ sales blitz to lure passengers as he gobbles up flight routes vacated by other airlines. 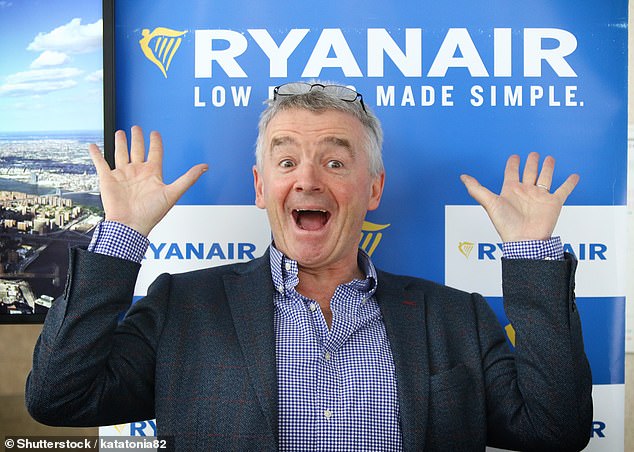 He is also aiming to haggle with airports and aerospace giant Boeing to secure hefty savings on landing fees and on orders for new planes.

O’Leary said he hopes the move to ‘dump prices’ will help Ryanair limit its losses to ‘the low hundreds of millions of euros’ for the next 12 months. The price war will place huge pressure on rivals including Virgin Atlantic, British Airways owner IAG and Easyjet, all of whom have been queuing up for state support and cutting jobs as they battle through the Covid-19 crisis.

Irish multi-millionaire O’Leary, who is known for his no-frills management style, said: ‘We will dump prices to get people moving again. Once we start flying in July, we will sell at whatever price we can to fill as many of those seats as we can.’

O’Leary said his planes need to be 60 per cent full to break even. Last July, Ryanair carried about 14million passengers and the average fare was €60 (£54) to €70 one way. By last Thursday, Ryanair had sold just 30 per cent of its July seats, compared to 60 per cent at the same time last year, despite a ‘big surge’ in bookings after Spain, Italy, Greece and Portugal announced plans to open their borders for summer breaks.

O’Leary said: ‘We’ll be lucky to carry five million passengers this July and the average fare will be €25 to €30.

‘So we’re looking at carrying less than half last year’s July passengers at half the fares we charged last July and August.

‘A lot of airlines are saying they will do fewer flights and keep the fares high and have a load factor [percentage of seats sold] of only 40 or 50 per cent. But we would rather pile it high and sell it cheap, and if we have to lose money for the next 12 months, then let’s try to lose the smallest amount of money by trying to sell as many cheap seats as we can.’

Ryanair will fly customers without social distancing on planes – which would have meant empty middle seats in most rows. Instead it will be mandatory for passengers and crew to wear face masks.

Queuing for onboard toilets will be banned, with passengers asked to ring a bell and be directed by crew.

O’Leary expects holidaymakers to ignore the Government’s proposed 14-day quarantine rules on their return to the UK. He described the policy as ‘total rubbish’ and predicted it would be dropped within weeks.

Ryanair’s profits of €1billion for the year to the end of March were hit by a €353million charge for a hedge on fuel costs. It expects to make a €200million loss for April to June and will start laying off up to 3,000 workers from July.

O’Leary said the airline’s €4billion cash reserves, with €400million of net debt, will help it to ‘weather’ the losses.

But he said Ryanair will need to cut costs ‘in every area’ until air traffic returns to 2019 levels – expected by summer 2021 at the earliest.

He is in talks with airports ‘all over Europe’ to agree incentives for delivering them more passengers.Airports charge airlines a fee per passenger – typically around €20 to €30. O’Leary said airports are keen to do deals to give him a discount for delivering growth to replace traffic lost by the Flybe and Thomas Cook failures, and other airlines scaling back their routes.

He said: ‘Gatwick, Stansted, Manchester, Birmingham, Liverpool, Glasgow, Prestwick – you name it, we’re talking to them. They all recognise that Ryanair is one of the few airlines that can deliver growth.

‘As airports offer us deals, we will move some of the planes around. What’s inevitable is that some airports will close some bases because we will have to move the aircraft to lower-cost airports elsewhere.’

O’Leary is also bargaining with Boeing for a discount on a fleet of up to 210 new 747 aircraft he has ordered. Ryanair has previously said it would invest more than $20billion (£16.2billion) in the jets. ‘Their order book has collapsed so they might be willing to sell us aircraft at cheaper prices as long as we step up and buy them,’ he said. ‘The bigger the discount, the more aircraft we’ll order.’

He said that expanding Ryanair’s fleet of 450 planes would also help him to take market share from easyJet and BA. ‘An awful lot of airlines are going to become significantly smaller over the next 12 months. If we can get bigger at selling cheap seats, we will take a lot of the market from higher-cost airlines like EasyJet and BA.’

Ryanair has accessed a £600million loan from the Government’s financing scheme and has furloughed around 80 per cent of its 18,000 staff. But O’Leary is a fierce critic of any airline that requests further state aid.

He is challenging Lufthansa’s €9 billion bailou t in the European courts, describing it as ‘illegal state aid’.

‘I wouldn’t give him a penny,’ he said. ‘He’s a billionaire living in tax exile in the Caribbean. If you don’t pay your taxes here or in Europe, you shouldn’t be entitled to look for state aid.’

O’Leary added that he hopes to minimise the number of redundancies by asking pilots to accept pay cuts of up to 20 per cent and cabin crew up to 10 per cent. ‘We are reasonably optimistic that pay cuts will eliminate most of the job losses – if not all of them,’ he said. 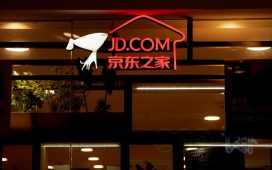 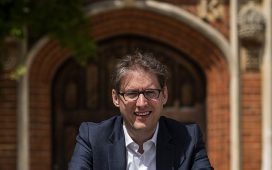