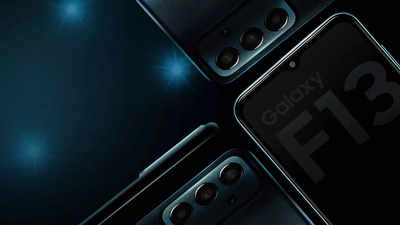 Samsung is all set to launch a new Galaxy F-series smartphone in India. Galaxy F-series is the company’s affordable smartphone range. According to industry sources, Samsung is said to launch Galaxy F13 in India next week. Samsung Galaxy F13 will succeed Galaxy F12, currently available at Rs 8,999 onwards.
A leaked image available exclusively to TOI Tech-Gadgets Now confirms the triple rear camera setup on the Galaxy F13. Industry sources also confirmed to GadgetsNow that the upcoming Samsung Galaxy F13 is likely to be priced under Rs 15,000.
Samsung Galaxy F13 likely specifications
In other Samsung Galaxy F13 is rumoured to sport FHD+ display. The smartphone is said to be backed by a 6000 mAh battery. Samsung Galaxy F13 is also said to come with a new Auto Data Switching feature that helps consumers make or receive calls even when they are stuck in a no network zone.
The smartphone is tipped to be powered by an octa-core Exynos 850 chipset. Samsung Galaxy F13 is expected to run Android 12 operating system topped with Samsung’s own One UI.
Meanwhile, Samsung recently launched the Smart Monitor M8 in India priced at Rs 59,999. The Smart Monitor M8 is a 32-inch 4K monitor having a 3000:1 contrast ratio, a refresh rate of 60Hz, 400 nits of brightness and HDR10+ support. It features a 10W 2.2 speaker setup comprising a pair of tweeters and woofers. The monitor runs TizenOS and comes with a dedicated remote controller. The monitor can also be used to watch OTT content with support for apps like Netflix, Apple TV+, Disney+Hotstar, YouTube and Samsung TV Plus. The M8 also features Amazon Alexa, Bixby, Auto Source Switch+, AirPlay 2, SmartThings Home and Ultrawide Game View.