Indestructible! Scientists develop incombustible lithium-ion battery that could have stopped the Samsung Note 7 from exploding

Researchers have developed an incombustible lithium-ion battery that could have saved Samsung billions of dollars during its exploding Galaxy Note 7 fiasco.

The flexible design uses a safer polymer, rather than flammable toxins, eliminating the possibility of combustion.

The new innovation is said to combat the issue that plagued Samsung’s Note 7, as some of the handsets spontaneously combusted as a result of a battery malfunction.

Scroll down for videos 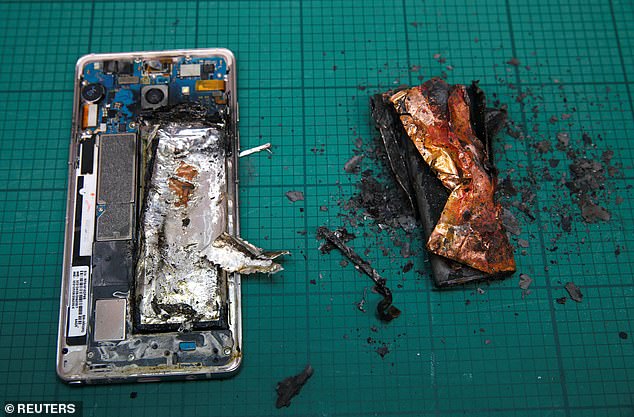 On August 2, 2016, Samsung took the stage in New York to unveil its 5.7 inch handset, a place where the firm also saw an opportunity to take a stab at Apple.

‘Want to know what else it comes with?’ teased Samsung’s vice-president of marketing, Justin Denison.

Within a few days of the launch, it appeared Samsung was eating their own words after reports surfaced that the Note 7 was bursting into flames – and this is what researchers from Johns Hopkins hopes to tackle with their new battery.

The flexible design (pictured) uses a safer polymer, rather than flammable toxins, eliminating the possibility of combustion

READ  Facebook is testing video-streaming subscriptions for its Watch platform

In research published recently in the journal Chemical Communications, the team, led by Konstantinos Gerasopoulos of APL’s Research and Exploratory Development Department, details its latest discovery: a new class of ‘water-in-salt’ and ‘water-in-bisalt’ electrolytes—referred to as WiS and WiBS, respectively—that, when incorporated in a polymer matrix, reduced water activity and elevated the battery’s energy capabilities and life cycle.

The new design ultimately eliminated the batter from any flammable, toxic, and highly reactive solvents that are used in current Li-ion batteries — making it a ‘safe, powerful alternative’, according to the researchers. 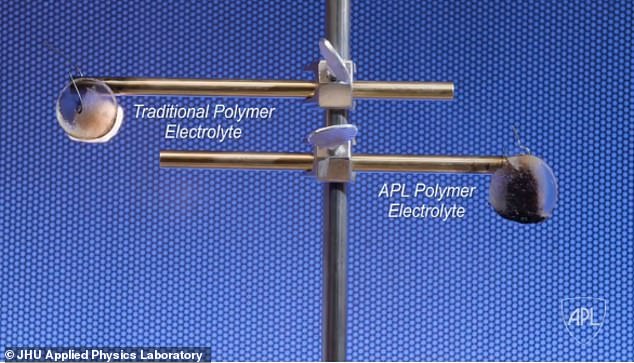 ‘Li-ion batteries are already a constant presence in our daily lives, from our phones to our cars, and continuing to improve their safety is paramount to further advancing energy storage technology,’ said Gerasopoulos, senior research scientist and principal investigator at APL.

‘Li-ion battery form factors have not changed much since their commercialization in the early 1990s; we still use the same cylindrical or prismatic cell types. The liquid electrolyte and required hermetic packaging have a lot to do with that.

Lithium  batteries are used in a range of consumer electronic devices, favored by manufacturers because they are lightweight and pack much more energy into a small space than other power cells.

But storing so much energy in a tiny space, with combustible components separated by ultra-thin walls, makes them susceptible to overheating if exposed to high temperatures, damage or flaws in manufacturing.

If the separators fail, a chemical reaction can quickly escalate out of control.

Koh Dong-jin, Samsung’s mobile president told reporters in Seoul: ‘The flaw in the manufacturing process resulted in the negative electrodes and the positive electrodes coming together.’

It is unclear how Samsung failed to discover the battery problem before launching the Note 7.

‘Our team’s efforts have generally been focused on replacing the flammable liquid with a polymer that improves safety and form factor. We are excited about where we are today. Our recent paper shows improved usability and performance of water-based flexible polymer Li-ion batteries that can be built and operated in open air.’

Additionally, the damage tolerance initially demonstrated with the team’s flexible battery in 2017 is further improved in this new approach to creating Li-ion batteries.

‘The first generation of flexible batteries were not as dimensionally stable as those we are making today,’ Gerasopoulos said.

The world’s largest maker of mobile phones recalled 2.5-million units of its top-of-the-range model more than two weeks ago, after batteries began catching fire while charging.

But users snubbed the South Korean electronics giant’s offer of a temporary replacement until new Note 7s became available, and there seemed to be little urgency among consumers for the permanent fix offered.

The success of the recall is seen as crucial to Samsung retaining brand loyalty and preventing customers defecting to arch-rival Apple’s new iPhone 7 or cheaper Chinese-made models.

A Samsung spokeswoman confirmed the firm had started to offer the replacement handsets.

The company began offering replacements for users in Canada and Singapore last week and is set to start soon in other nations including Mexico, Taiwan, New Zealand the United Arab Emirates.

But with only a trickle of customers visiting stores in Seoul today for their replacements, the fate of the much-hyped handset remained unclear, although consumers in the South Korean capital were sympathetic.

The recall dealt a major blow to the firm’s reputation and raised alarm among airline, with several banning passengers from using the device on board.

South Korean users have time until March 2017 to hand in their phones for a replacement but Samsung is hoping a software update that will limit battery recharges to 60 percent of capacity will jolt consumers into returning their handsets.

The recall crisis erupted as Samsung finds itself squeezed by competition from Apple in the high-end market and Chinese rivals in the low-and mid-end segment.

With this latest benchmark reached, the researchers continue to work on further advancements of this technology.

‘Our team is continuously improving the safety and performance of flexible Li-ion batteries,’ said Jeff Maranchi, the program area manager for materials science at APL.

‘We have already achieved further discoveries building upon this most-recently reported work that we are very excited about. ‘

‘We hope to transition this new research to prototyping within the year.’

International Space Station speed: How fast does the ISS travel?