Shares in AJ Bell soared by more than 33 per cent today as investors snapped up the online investing platform’s shares on their stock market launch.

Big City investors and customers had been able to subscribe to the shares at their float price of 160p before today – but as the stock was in high demand as it made its market debut. 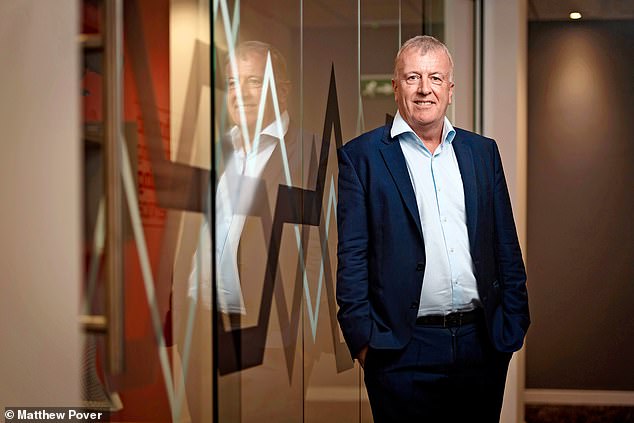 At a £651million valuation, founder Andy Bell’s 28 per cent stake is worth around £180million and he has trimmed his holding to 25 per cent.

The group has put 27 per cent of its stock up for sale, and while the float price valued the firm at £651m, at the current share price it is worth £866m.

Boss and founder Andy Bell said: ‘The IPO is a significant milestone for the business and I see it as firing the starting gun on our next phase of growth, which I’m massively excited about leading the business through.

‘The demand for our IPO from both blue chip institutions and our own customers was a real endorsement of our business and the market opportunities that lie ahead of us, and I’m pleased to welcome our new shareholders on board.’

Market volatility and Brexit fears have resulted in several disappointing London listings in recent months but, undeterred, AJ Bell said it believes this to be an ‘appropriate time to bring the group to the public market’.

At a £651million valuation, founder Mr Bell’s 28 per cent stake is worth around £180million and he has trimmed his holding to 25 per cent.

Invesco, which holds a 44 per cent stake, has sold down its holding to 25 per cent following the IPO.

AJ Bell’s 750 staff are also set to pocket more than £2million between them as a result of the listing, which raised £169.3million.

Casper seeks lower valuation in IPO than private funding round

How to Trade ETFs

Coronavirus is good for bitcoin

Expanded use of J&J's Stelara OK'd in Canada

FTSE rises on relief over China growth but insurers slide

Google now allows Apple users to use iPhone as physical security key for its...

Trade setup: Nifty may see a mild pullback, but outlook is still weak