Should we remortgage before interest rates rise?


We’re on a three-year fixed-rate mortgage with Santander, paying 1.89 per cent interest. It doesn’t end until April 2022 and if we transfer out early we would be hit with a charge of £4,848. But with all the talk of interest rates going up I wonder whether it would be worth trying to switch now? We still owe £161,500 on our mortgage. Would it be worth switching? And what are the best rates on offer if we do?

David Hollingworth, associate director at broker L&C Mortgages, says talk of an impending base rate rise and the resulting withdrawal and repricing of some of the historical lows in mortgage rates has put a renewed focus on whether to lock into a rate now.

There are still extremely low rates on offer but they have been climbing. Lenders are contending with higher funding costs as market expectations of a rate rise have heightened.

The early repayment charge (ERC) for leaving a fixed rate early can be significant, in this case 3 per cent of the outstanding mortgage amount. The starting point for a decision to pay that penalty and switch early would typically hinge on whether the improvement in rate will be enough to save back the ERC over the remaining term. It is therefore very much a balance between the size of ERC, the remaining tie-in period and the difference between the existing and new rate.

In this case, there is no way that the 3 per cent ERC would be saved in the remaining four months or so of the fix. Assuming a term of 15 years remaining, the payments would currently be £1,031 per month and even switching to one of the near-extinct 0.99 per cent deals would cut the monthly payment to £966 per month, a saving of £65 a month or £260 over four months.

The question therefore becomes one of whether it’s better to grab a fixed rate now due to the fact that they are already on the rise. Because we cannot know how high the rise in fixed rates could be, it’s not something that can be calculated and guaranteed. If fixed rates escalated rapidly then there could be a bigger benefit in grabbing a deal now — but even if they doubled, the savings over a couple of years would not recoup the ERC. 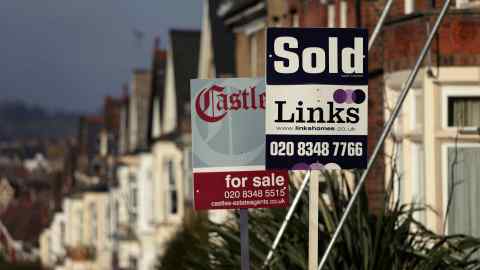 Fortunately, there are options that should avoid the need to cough up the lender’s ERC without losing out on the rates available in the current market. Many lenders’ mortgage offers will be valid for up to six months. That gives ample scope to shop around now and make an application on a current deal, which would secure the rate and result in a formal offer that would be valid when the existing rate comes to an end.

One downside is that the delay in completion could eat into the length of the fixed rate, as most products will be fixed until a specified date. Nonetheless it does remove any concerns about rates rising astronomically in the meantime.

That option should allow for savings to be made sooner, but of course it makes sense to see how any offer compares to the open market. A mortgage adviser will be able to cover the options from new and existing lenders, to help give overall context and peace of mind that you are getting the right deal.

Is a trust still worth considering?

My husband and I are considering setting up a trust, but I understand they have fallen out of favour over the past decade and the current tax regime makes them less helpful when looking to reduce liabilities. Are they still worth considering and if so what do we need to think about?

Liz Cuthbertson, a partner at chartered accountants Mercer & Hole, agrees that there have been a number of changes to the taxation of trusts over recent years which can make them appear less favourable. Discretionary trusts pay income and capital gains tax at the top rates of tax. In addition, many trusts are also subject to inheritance tax charges at each 10-year anniversary of the trust and when distributions are made to beneficiaries.

There are still some tax advantages, but usually there are other reasons for people wanting to set up a trust.

If the settlor is UK domiciled, they are generally able to make a transfer into a trust up to the available nil rate band (currently £325,000) without incurring a charge to inheritance tax on the sum transferred. Parents or grandparents can opt to be joint settlors so they can put a total of £650,000 into a trust. If the settlor transfers assets that qualify for Business Property Relief or Agricultural Property Relief, it is possible to transfer a greater value than this without triggering an inheritance tax charge.

The settlors can also be trustees, which allows them to maintain a level of control over the trust assets. I generally recommend that a professional trustee should be considered either solely or together with the family.

The trustees can make tax-efficient distributions of income to beneficiaries, for example, to use up a young beneficiary’s personal allowance. If the beneficiary receives more, she can claim a tax credit for tax paid by the trustees to reduce her tax liability.

The trust funds will leave the settlor’s own estate seven years after the settlor’s transfer on trust. This saves inheritance tax at 40 per cent on the assets transferred. The trust will have its own IHT charges at various occasions, but these will be smaller and more manageable over time. This might enable trustees to retain more wealth over time and be able to make different investment choices.

Asset protection is often one of the most compelling reasons for a trust. Rather than give assets into the personal hands of the children or grandchildren, the trustees will look after family wealth and enable future generations to access that when they need it, at trustees’ discretion.

Effective control and governance can last for multiple generations and give families peace of mind that accrued wealth will be applied for good purposes. The cost and compliance attached to a structure will be justified in the right circumstances.

My husband has recently retired and we are ready to plan the next stage of our lives. Our first decision is to sell our historic but rambling country home and downsize to something more manageable. Once we have bought a cottage to live in, we would like to use the remaining proceeds to help our two sons purchase family homes of their own in London when they are ready. They are both in their 20s now. What tax or gifting considerations do we need to account for?