By Megan Sheets For Dailymail.com

The San Antonio Food Bank distributed one million pounds of food to roughly 6,000 families in a single day as millions across the country turn to charity organizations to avoid going hungry amid coronavirus lockdowns.

Stunning aerial photos show thousands of cars lined up at Trader’s Plaza in San Antonio during the massive food distribution event on Thursday.

Families in need waited hours to get their hands on fresh fruit, vegetables and other non-perishable goods that have become hard to find in traditional stores as panic-buying leaves shelves empty.

‘The need is that great,’ San Antonio Food Bank President and CEO Eric Cooper said of the huge turnout.

‘We are moving through food so fast, this is our second big distribution this week, but there are hundreds of distributions that are going on all the time.’ 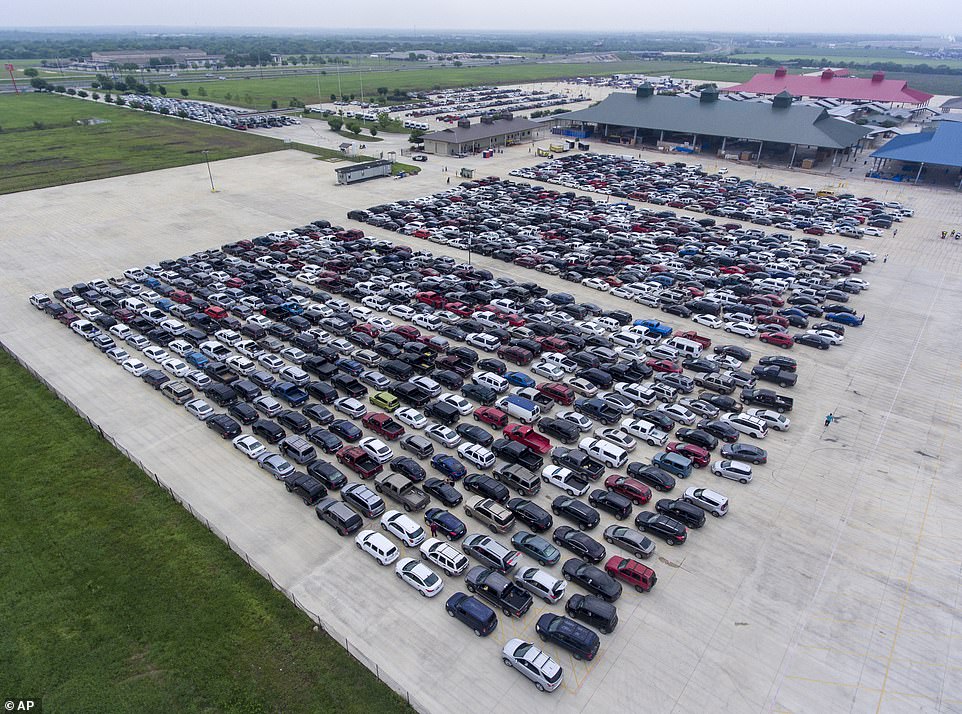 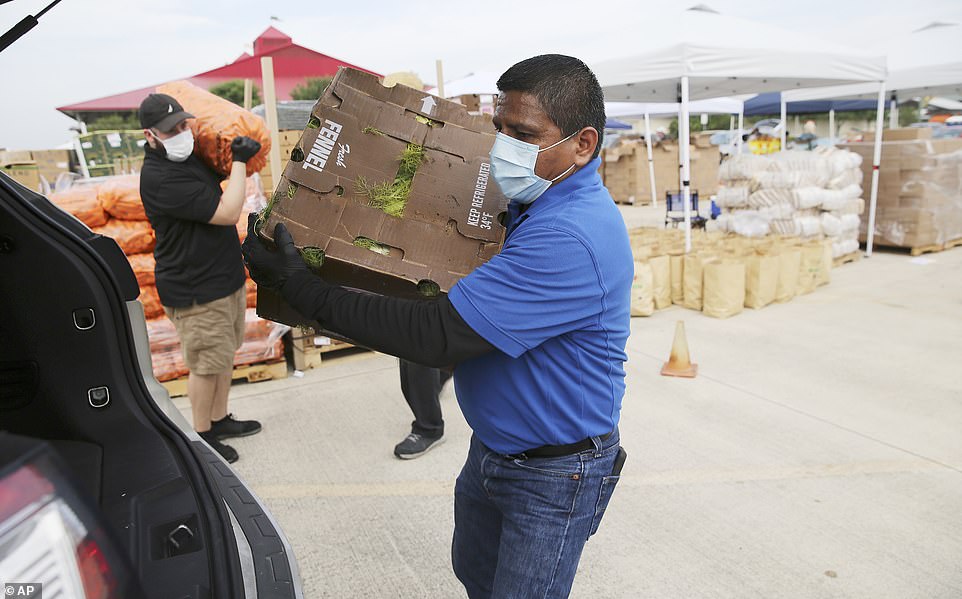 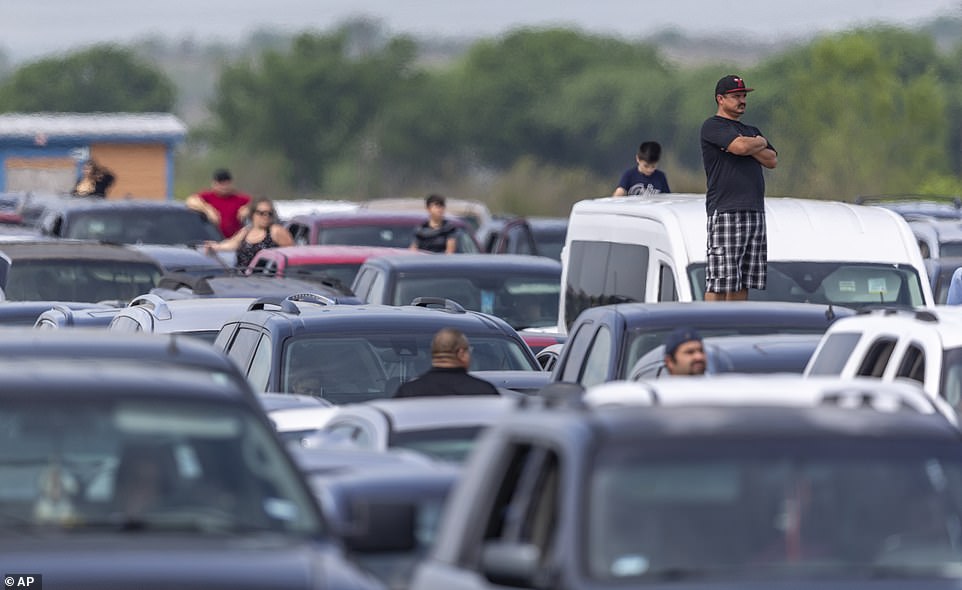 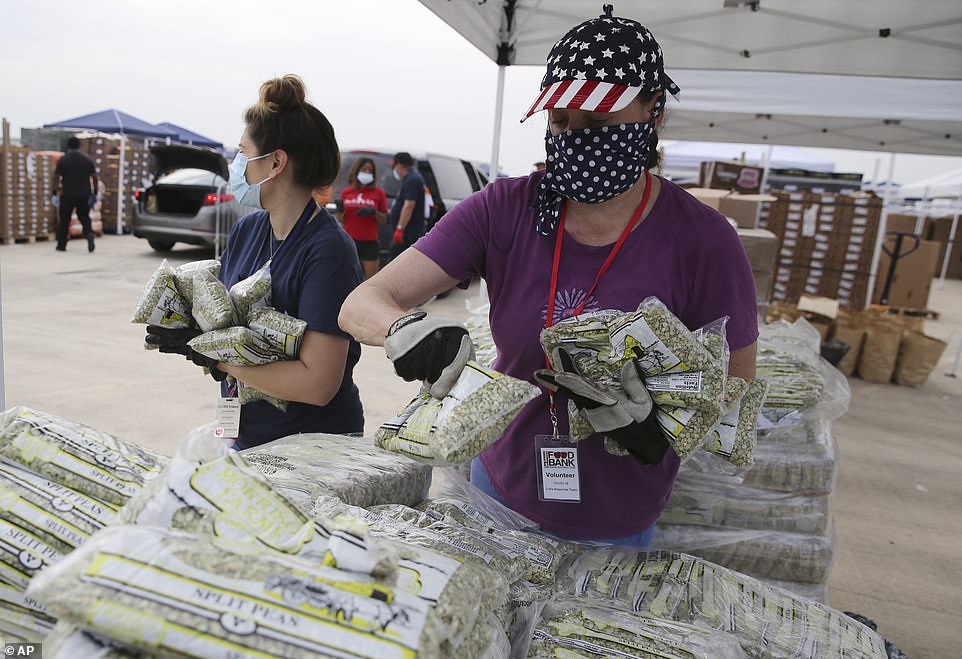 The event dubbed ‘Mega Giveaway’ will be held twice a week for as long as stay-at-home orders are in place in the city, available to people who pre-register online.

Thursday marked the fourth time they held the event – and the largest turnout yet.

Michael Guerra, the food bank’s chief resources officer, said 5,000 families signed up for the latest event, but even more showed up.

Guerra said he expected each family to leave with enough food to last for the rest of the month – around two grocery carts full. 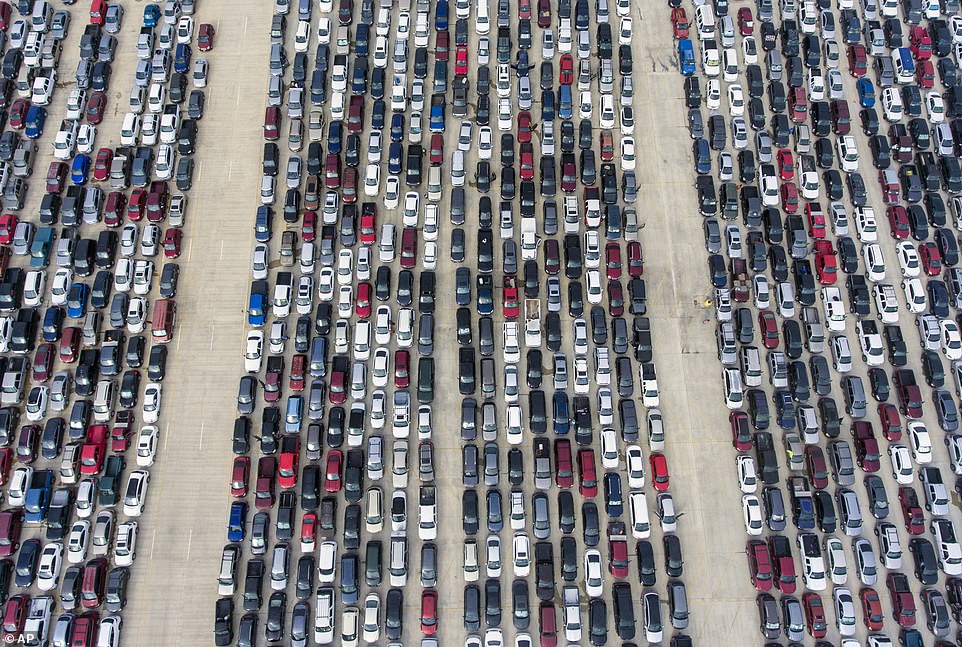 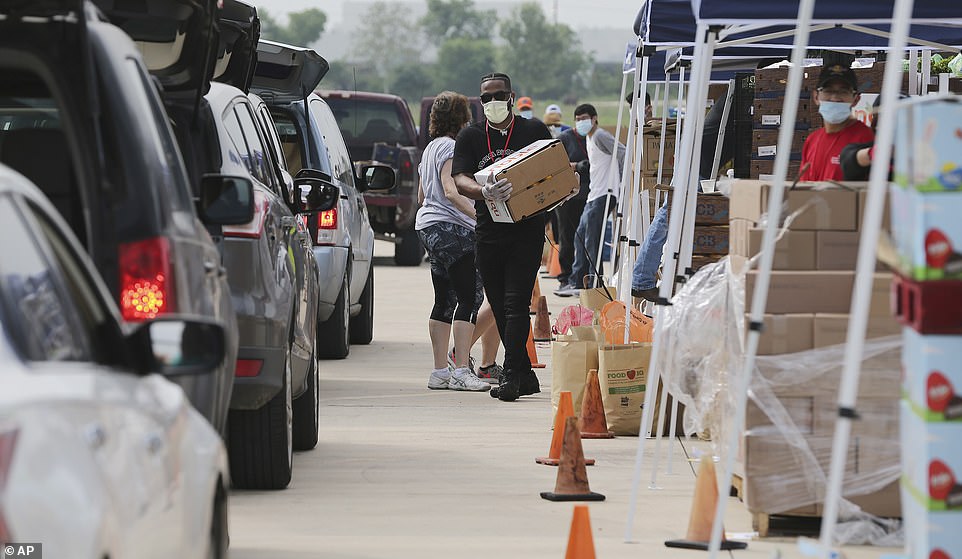 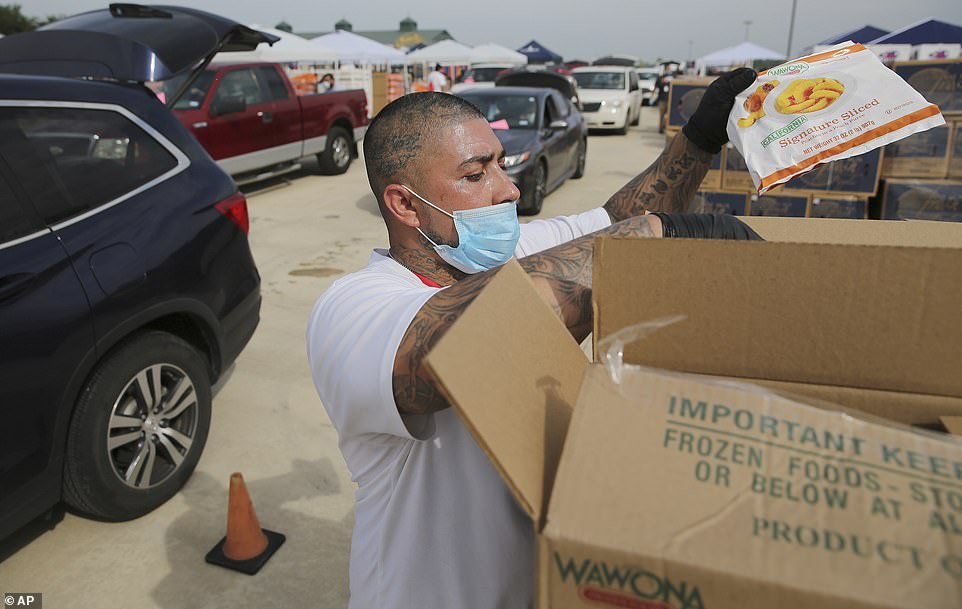 Each family left with enough food to fill two grocery carts, intended to last them the rest of the month 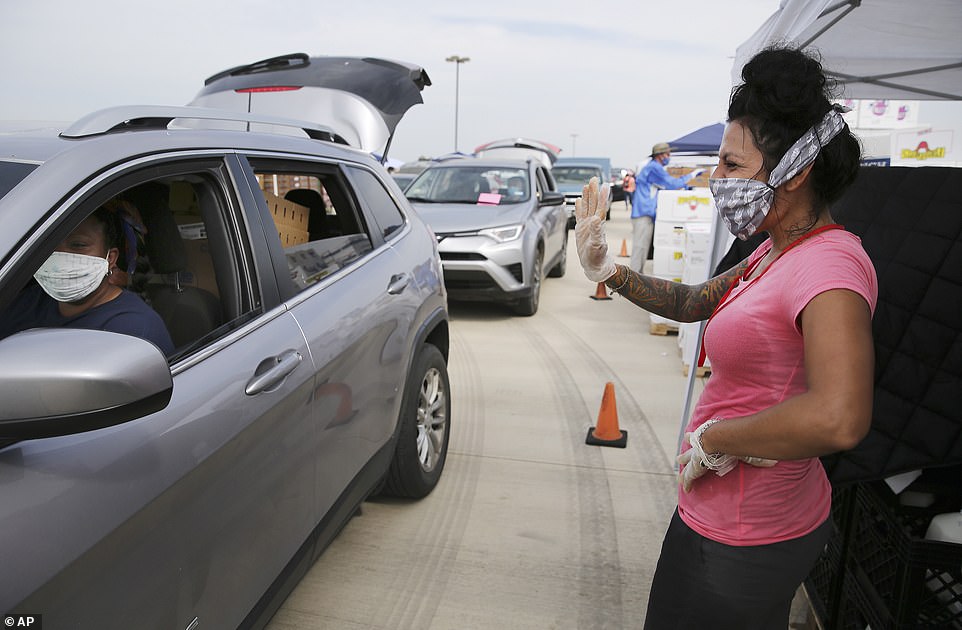 Pete Delgado was among the thousands of people waiting in line on Thursday.

He told FOX San Antonio he and his wife are both disabled and that he arrived at Trader’s Plaza in the middle of the night to ensure that his family wouldn’t go hungry.

‘I’ve been hour here for an easy 12 hours,’ Delgado said.

‘And it’s important for me and my wife because we have nothing to eat at home. I brought crackers and peanut butter as a snack to get me through the night.

‘We didn’t have any bread or lunch meat or anything to make some kind of lunch, a picnic for me to stay overnight, so I’ve just been munching on peanut butter and jelly and crackers.’

Cars began lining up in the parking lot as early as Wednesday night after about 5,000 families pre-registered for the event 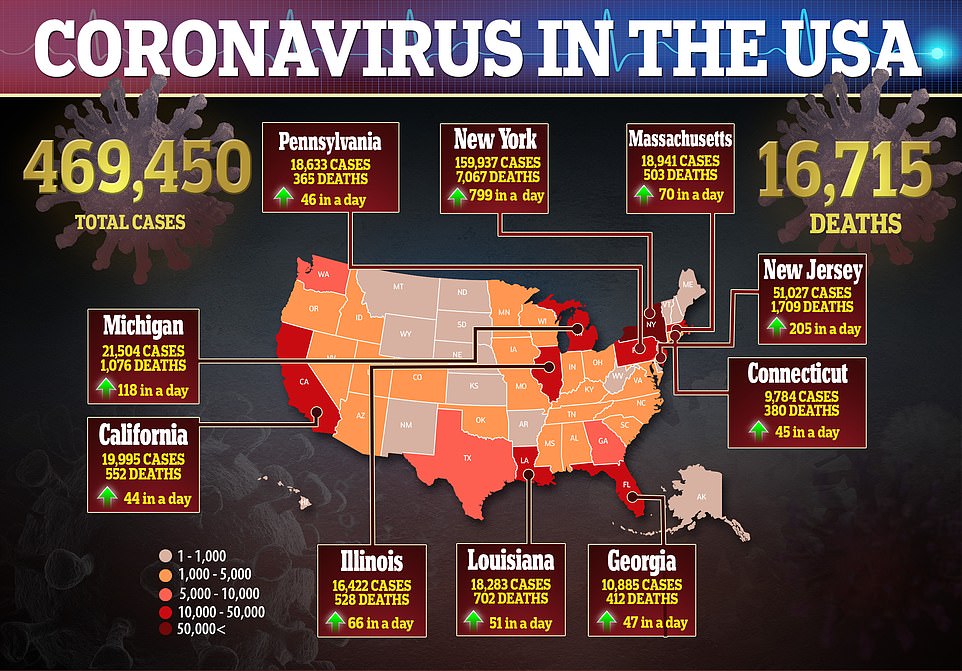 Millions of families across the country have been turning to charity organizations to avoid going hungry amid coronavirus lockdowns. As of Thursday, more than 469,000 COVID-19 cases and 16,715 deaths have been confirmed in the US 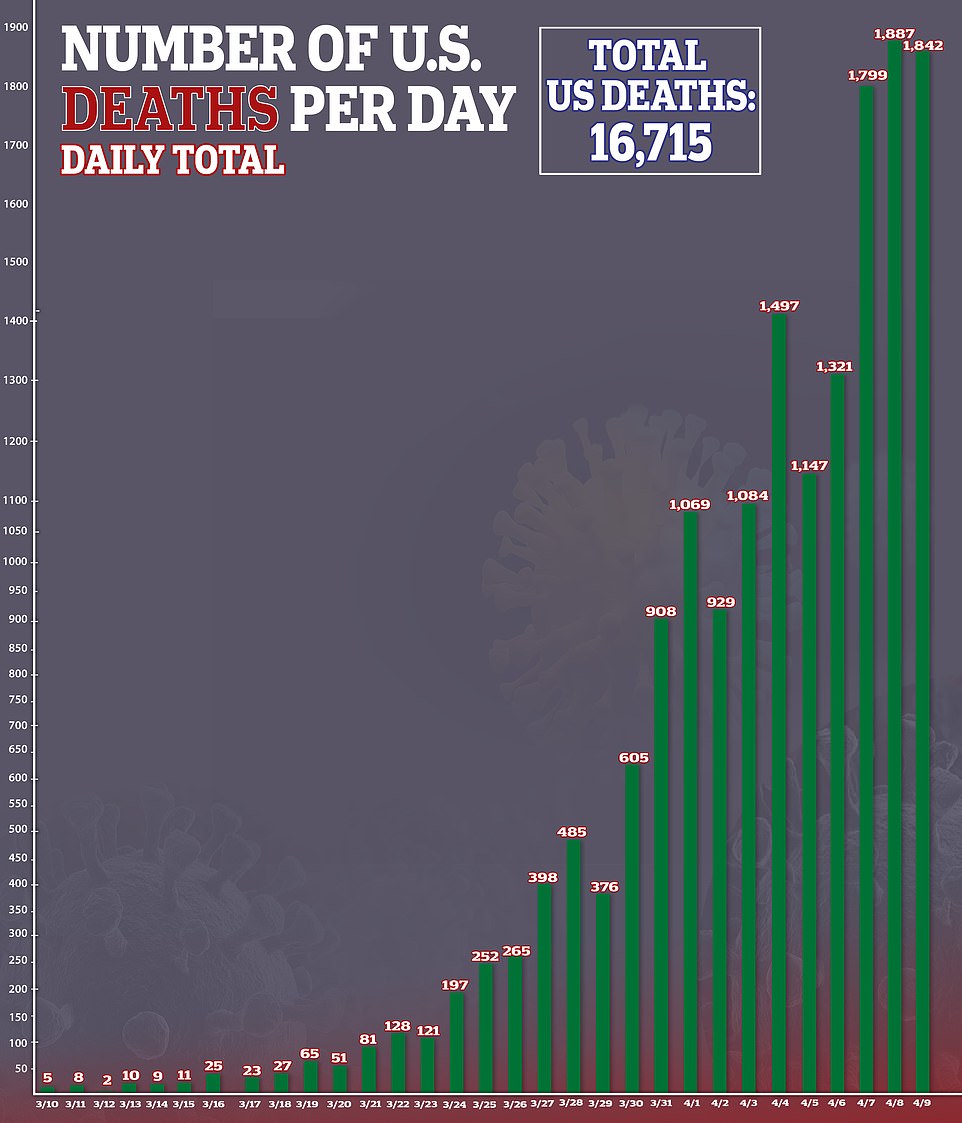 How an Attorney Can Help You After Car Accident

Volvo Limits Speed To 180 Km/h: Side Effect Is Positive For EVs – InsideEVs