At least not physical ones. Acquired by Daimler in 1994 to function as something of a laboratory for future personal transport, Smart is still a forward-thinking brand, and its digital-technologies arm is more active these days than, for the time being, its efforts in either design or engineering.

The new models therefore come with a suite of app-based ‘Ready To’ services, including one that allows the owners to give access to the car to other individuals, and even charge them for use on by-the-minute basis. 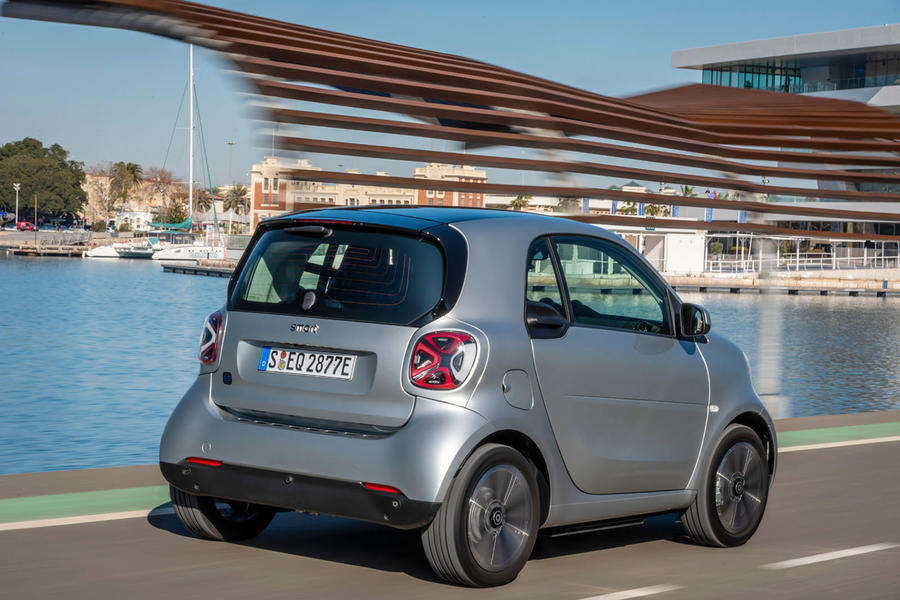 Largely unchanged, but still a unique and interesting machine at a time when most cars seem to become more homogenised with every passing day. Which makes the ForTwo quite likeable from the off.

Slide aboard and you’ll find seats that are only as supportive as they need be for low-energy city driving, and that perch you usefully high for an expansive view forward (protective but fairly chunky A-pillars notwithstanding). There’s also some additional storage within the cabin – a couple of new nets and trays – but the feeling of what could be described as ‘avant-garde quirk’ is undermined by some flimsy panels and cheap plastics at key touchpoints. The handbrake is one particularly poor example.

The ForTwo EQ line-up is fairly straightforward, starting with Passion (15in alloy wheels, halogen headlights, rear-parking sensors and 7in touchscreen infotainment), then moving up to Pulse Premium (16in alloys, panoramic roof and rear-view camera) before you reach Prime Exclusive, which costs some £2300 over base and adds full LED headlights, heated leather seats and ambient lighting.

There’s also an ‘Edition One’ spec at launch, which is plastered with decals much like those seen on the Mercedes-AMG models of the same name (cute fun or an utter travesty, the choice is yours) and some red/black gloss trim to go with various Brabus-branded elements. At £23,065 even after the £3500 government grant for plug-in cars, don’t expect to see many of these on the road.

And so to the big problem, which is that a 17.6kWh battery today classes as unusually small, and even when calculated under the NEDC regime (considered an optimistic method), the ForTwo’s range fails to make it into triple digits.

READ  2021 Ford Bronco: What It Can Learn from the Toyota FJ Cruiser

On account of Smart’s unambiguously city-centric proposition and the state of the competition, such limited autonomy may have once been forgivable but now looks downright feeble, not least compared to the WLTP-calculated 161 miles offered by the new electric Skoda Citigo.

Part III: How the Tech Caucus is Courting Silicon Valley with Charity – San Jose Inside

From the archive: AA is formed to help drivers evade speeding fines