DENVER — Once he qualified for the state tournament, Soroco High School junior Kody Logan knew he had to call on one person for help: his brother and 2019 state champion, Jace Logan.

Down 6-5, Kody elected to start the third period in the down position. With 40 seconds left, Kody earned 2 points with a reversal. A penalty point against Burns and a near fall in the final seconds granted Kody the 11-6 win and a trip to the semifinals.

Kody said Jace has given him “lots and lots” of advice on what it takes to win a state wrestling championship. They’ve been wrestling with and against each other since they were little and have a close relationship, so if anyone could help Kody top his excellent season with a championship, it was Jace.

“The main thing I’ve told Kody, and gotten a lot of people to tell him throughout the week, is he’s got to believe in himself,” said Jace. “He’s got all the tools, and he’s put in all the work. So now, it’s just that edge of him believing in himself and going out there.”

Logan met Zeb Etter of Paonia in the 152-pound semifinals. He earned the first take down and used a reversal to gain a 4-1 advantage in the first period. He elected to start the second in the neutral position.

Etter got the best of Logan and put him on his back, earning 5 points with a takedown and near fall. Logan spent the entirety of the third trying to flip Etter to earn near fall points, but couldn’t manage to do so.

“That cradle made the difference,” said Whaley. “That was what our goal was, don’t get cradled. We knew that was the key.”

“We chose to go down because it’s a lot easier to score off bottom than the ride, sometimes,” said Kody. “We were gonna try to get an escape, but instead I got the reversal and putting him on his back just won it.”

Kody may be the only Ram wrestler, but he didn’t show up to the Pepsi Center alone. Jace is his warm-up partner, and there’s a small swatch of maroon in the stands, as his whole family, decked out in Soroco maroon, came to Denver to cheer him on.

“Being here for Kody as a big brother and coaching and warming him up, it’s pretty special.”

YTA Masterclass Review – Must Read This Before Buying – FactsChronicle 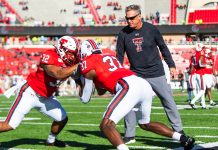