Stock of the Week: Tesco

This week on Twitter we’ve pitched the UK’s biggest supermarkets against each other and market leader Tesco (TSCO) has won the battle of the trolleys. With the recent acquisition of Morrisons for £7 billion by a US private equity firm, UK supermarkets are suddenly in the spotlight as investments. They generate billions in cash, have substantial property assets and have thrived during the pandemic as people were stuck at home. This takeover raises the question whether another big supermarket will be next? UK supermarkets also provided a lifeline during lockdowns – Tesco has a dominant 35% of online grocery shopping – and proved pretty resilient investments as shares soared, as well as keeping dividends flowing during the income crisis. From petrol queues to fears over Christmas turkeys, supermarkets now seem to be in the frontline of the latest UK supply crunch – and have an opportunity to win customer loyalty by keeping shelves stacked and petrol flowing.

Dividend investors have focused on oil and mining companies in recent years, but supermarkets have stealthily moved up the agenda as reliable payers that can also surprise with some decent special dividends. Tesco has been one of these FTSE 100 companies helping to shore up UK dividends since the pandemic. It paid two dividends last year, 6.5p per share in July 2020 and 3.2p per share in November, which was especially welcome during the 2020 dividend crisis when billions were lost to cuts and cancellations. Earlier in 2021 it paid an outsized special dividend of £5 billion earlier this year, which was worth 50.93p per share (chunky in the context of a current share price of around 275p). The windfall came from the sale of its Malaysia and Thailand assets, a move that triggered a sell-off in the shares in early 2021. Tesco had some positive news on the dividend front for investors in its latest half-yearly results this week, pledging to buy back £500 million of shares and increase its dividend every year, with the aim of paying out around 50% of total earnings. The company now yields more than 3%, which makes it one of the highest FTSE 100 yielders covered by Morningstar. Tesco also upgraded its full year profit forecasts and shares soared this week, from 248p at the open on Monday to 276p on Friday.

Last time we wrote about Tesco for our stock of the week column in October 2020, Tesco shares were at 214p, trading below their fair value at the time of 249p. Now it’s rated as a 3-star stock as the shares are seen as close to their fair value of 273p per share. Morningstar analyst Ioannis Pontikis says that Tesco is one of the best-positioned grocers in the UK sector, posting better-than-expected results, especially from its banking division. Still, the UK’s largest supermarket is not assigned an economic moat because of the intense competition in the UK grocery market, especially through new(ish) entrants like Germany’s Aldi and Lidl. “We do not attribute an economic moat to Tesco, given the intense competitive environment in the UK food retail market triggered by the disruptive influence and growth of hard discounters in the region,” says Pontikis.

In Tesco’s heyday, prior to the 2014 accounting scandal, the supermarket expanded square footage to giant out-of-town shopping centres like Tesco Extra. That model then fell out of favour and was seen as inefficient, with competitors like M&S, Waitrose, Morrisons and Sainsbury’s opening smaller urban outlets. While there are still concerns about the efficiency of running megastores, British shoppers are now fretting about food and fuel shortages and want companies like Tesco with strong logistics, reliable supply networks and distribution channels. Tesco’s sheer size can work to its advantage, equity analysts say. “Tesco’s enormous scale means it’s weathering the supply chain crisis better than others – it’s times like these when being the biggest fish in the pond really counts. The mature, deeply rooted nature of its supply relationships have been a key tool in allowing Tesco to keep its shelves well stocked, and outshining competitors in the process. The size of Tesco’s distribution network also can’t be overstated, which again gives the group the flexibility to deliver the goods at scale,” says Hargreaves Landsdown’s Sophie Lund Yates.

With shoppers also anxious about rising costs, Tesco has so far managed to absorb these costs, says Ross Hindle, an analysts at Third Bridge, but may be pressured to raise prices at some point. “For now, Tesco is holding on to its Aldi price-match strategy; however, our experts question how sustainable this will be given the UK’s inflationary headwinds and point to a resurgence from the discounters,” he says.

What about the potential takeover opportunities by private equity? Morningstar’s Pontikis argues that Sainsbury’s is possibly more attractive to the buyout firms. Tesco’s digital infrastructure is a key asset, but rivals have more extensive property portfolios, which are the key attraction for buyers. Tesco chief executive Ken Murphy rejected the idea that the share buyback, which generally supports share prices, was a bulwark against buyout interest. After all, Morrisons shares were languishing below 200p at the start of this year but are now nearly 60% up in 2021. The buyout battle even went to auction, with CD&R taking the company private for 287p ($9.5 billion). 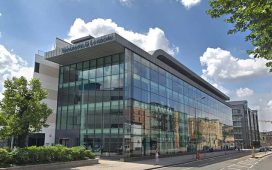