Trading has been choppy this week with the major averages mostly wavering around the flat line, but the S&P and Nasdaq are still on track for a positive week and are sitting less than 1% from their records. The Dow is 1.7% from its record.

Nvidia shares popped more than 8% in premarket trading after beating on the top and bottom lines of its quarterly results and issued a bullish revenue forecast for the current quarter ending in January. The chipmaker reporter a 55% gain in data center sales from the same period a year ago and its biggest market, gaming, reported a 42% sales increase.

Retail continued its big earnings week. Shares of Macy’s and Kohl’s kicked the day off jumping 11% and 7%, respectively. Both companies smashed quarterly profit and revenue estimates, much like its peers who reported earlier in the week. Mos have reported same-store sales gains from the previous year and investors are optimistic going into the holiday shopping season.

Elsewhere, Deere saw its shares rise more than 2% after it came to a resolution with workers who had been on strike since Oct. 14.

Dow component Boeing also saw its shares rise another almost 2% following an upgrade from JPMorgan, which said the aerospace giant has significant upside as it clears up several issues that have dogged the company.

Going in the other direction, Cisco Systems fell 5% due to weaker revenue guidance and a revenue miss. Kraft Heinz shares also dropped more than 2% after the company announced a secondary offering of common stock.

Initial filings for unemployment insurance fell slightly to 268,000 for the week ending Nov. 13, the Labor Department reported Thursday. That was the lowest level since March 2020, and the seventh straight weekly decline. Economists polled by Dow Jones expected them to have fallen to 260,000, compared to the previous week’s adjusted 269,000 claims.

On Wednesday, the Dow Jones Industrial Average lost 211 points, dragged down by a 4.7% loss in Visa shares. The S&P 500 dipped 0.26%. The Nasdaq Composite ticked 0.33% lower, despite most mega-cap technology companies closing in the green.

The small-cap benchmark Russell 2000 was the relative underperformer on Wednesday, dropping 1.2%.

“Concerns about Covid also caused the 10-year bond yield to decline for the first time in 6 days and kept downward pressure on commodity prices including another sizable drop in crude oil prices. If inflation keeps rising while another Covid surge again stalls real economic activity, we may find out how the stock market handles a pseudo-stagflationary episode,” he added. 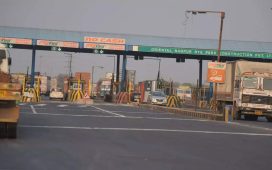