Fears are growing for the global economy after sharp falls in manufacturing raised the spectre of another recession in the crisis-torn eurozone.

Industrial production in the single currency bloc was 1.7 per cent lower in November than it had been the previous month, sparking concerns of a slowdown on the Continent.

A report by Bank of America Merrill Lynch warned that Germany is already in recession. 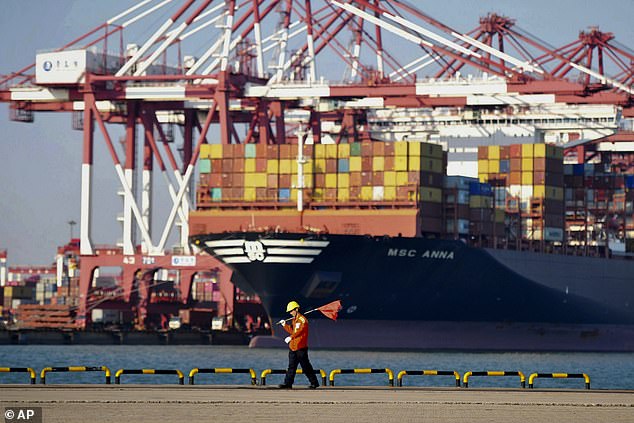 Aworker walks by the container ship docked at a port in Qingdao in China’s Shandong province. Exports by China slumped 4.4%  in December  their biggest decline in two years

In another sign of a gathering storm, exports by China slumped 4.4 per cent in December – their biggest decline in two years – amid a trade war with the US.

The figures from Europe and China came as the US government shutdown entered its 24th day, making it the longest ever period that federal agencies have been closed.

Global economic groups warned of a widespread slowdown which could harm Britain too. Stock markets around the world went into reverse as nervous investors digested the news. Uncertainty over Brexit is also plaguing the markets.

The eurozone grew by just 0.2 per cent in the third quarter of 2018, and it was hoped this would be followed by a recovery at the end of the year.

But the latest figures, from statistics office Eurostat suggest the situation has only got worse.

Bert Colijn, of Dutch bank ING, said: ‘Fears of a technical recession in large eurozone economies are mounting as industrial production in November provided a harsh reality check for economists.

‘Surveys have been dismal throughout the quarter, and actual production data is now confirming that bleak view on the eurozone economy.’

The biggest fears are for Germany, whose economy shrank by 0.2 per cent in the three months to September 2018.

Analysts at Bank of America Merrill Lynch believe output fell 0.1 per cent in the fourth quarter – meaning Germany is in recession.

Germany is the powerhouse of the single currency bloc, but is heavily reliant on exports by its manufacturers and therefore at risk if global trade falls.

Italy is also seen as highly exposed, with an economy which was flat with no growth in the third quarter.

The country’s treasury minister Giovanni Tria said he expects this stagnation to have lasted until the end of 2018.

Zero growth will pile pressure on Italy’s ruling anti-establishment parties to act, and could force them into a confrontation with Brussels over state spending rules.

The Organisation For Economic Co-operation And Development warned that growth is slowing in Britain, the US and the euro area.

The Paris-based OECD added that Chinese growth is also slowing. China’s expansion has powered global growth for a decade, and the consequences could be catastrophic if it ground to a halt.

Alastair Neame, of the Centre For Economics And Business Research, said: ‘The trade dispute that erupted during the summer between the US and China has dragged down global trade growth and has spilled over into wider supply chains.’

What are NFTs and Why are They so Valuable?