The original human goal – and that of much of modern medicine – is to live the longest, healthiest, best life possible.

And Reddit user SportsAnalyticsGuy has created a beautiful chart of the people who rank highest in that goal: the 65 centenarians and supercentenarians who have held the title ‘oldest person on earth’ at some point in history.

His visualization shows the elite group in order of who was born first to the most recent super-ager, Kane Tanaka who, at 116, is the oldest living person in the world.

It also includes details like the ethnicity, gender, the length of each person’s ‘reign’ and even a controversial character. 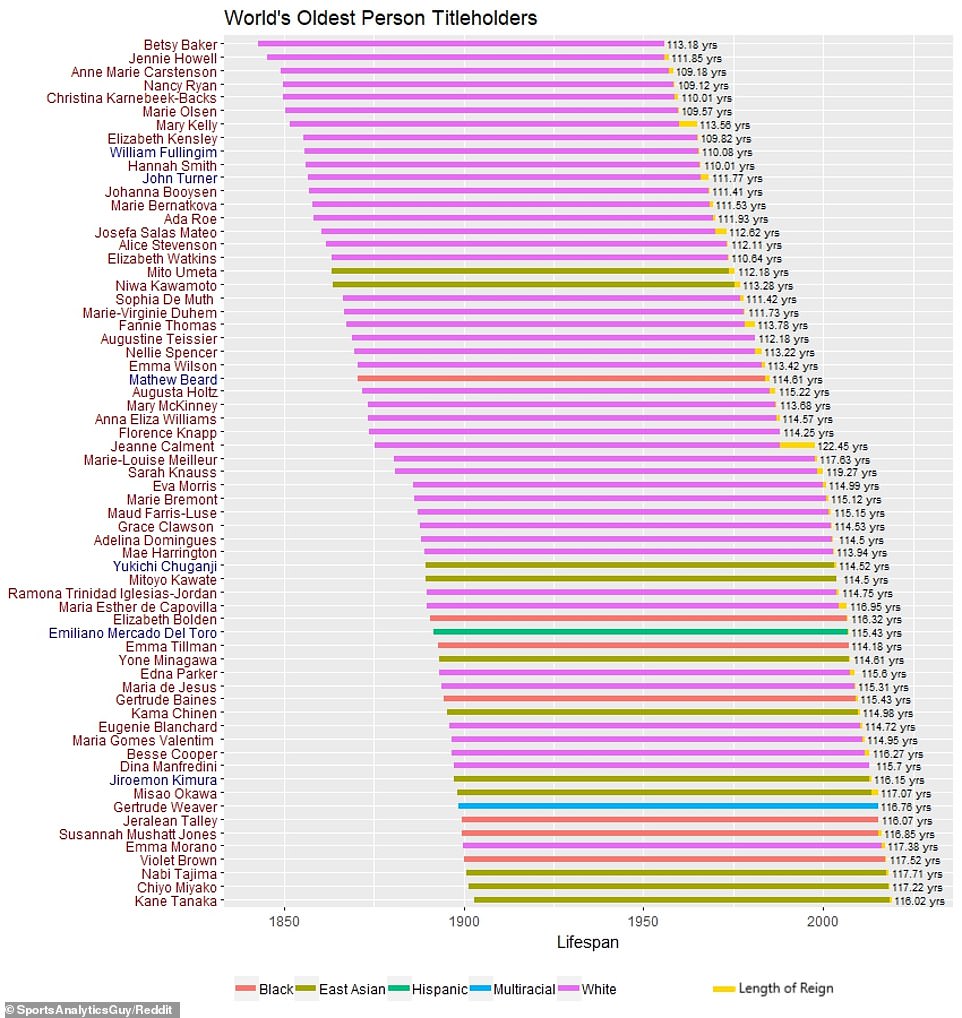 The graph shows the oldest people in order from the first on record to the current title holder, using color-coding to show the ethnicity of each and the length of their reign (yellow)

Countless scientists, philosophers and theologians have tried to work out the formula to a long life.

This includes studying – and for some, obsessing over – information about the longest living people.

Women also rack up many points. It’s well known that women have longer average lifespans than men, and the super-agers are no exception.

Only six out of the 65 oldest people on record have been men.

According to SportsAnalyticsGuy’s graph, nearly 70 percent of recorded oldest people have been white.

However, as the chart makes clear in the changing distribution of bar colors, the title has been held by an increasingly diverse group as time has gone on, which may be a matter of better record keeping or changes in various societies.

One woman, Jeanne Calment, has maintained the crown of crowns – the longest life ever lived – for longer than anyone else.

But, some have refuted her claim to the throne.

Just this week, a mathematician questioned suggested that the real Jeanne Calment had died much earlier but her daughter had assumed her identity to dodge taxes.

Some have said it was nearly impossible for Calment to have lived to 122, but others are defending Calment’s title, and say her age is well proven.

Whatever the case, she remains the reigning super-ager for now, according to SportsAnalyticsGuy’s vibrant ranking system.