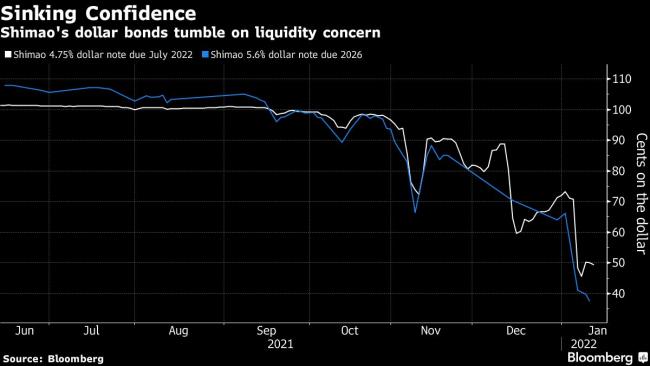 (Bloomberg) — A slump in Sunac China Holdings Ltd.’s dollar bonds put them on track for record lows after a local court in Shenzhen ordered its onshore unit to freeze its holdings in several companies.

Sunac’s note due 2024 lost 5.6 cents on the dollar to 48.6 cents, headed for the largest drop since Dec. 14. China’s high-yield dollar bond market lost on average 2 cents, traders said, led by declines in property developers. One of Shimao Group Holdings Ltd.’s bonds was on pace for a record low.

Some of China’s most stressed property developers face a raft of key payments this week, a test for the country’s volatile credit market. China Evergrande Group, which already failed to repay dollar debt on time, is seeking to avoid its first onshore default when holders vote on whether to allow the firm to defer payment Thursday. Shimao and one of its onshore units need to service some $376 million in bonds and interest payments in the coming days. The company assured it will repay a local note due Saturday.

An ill-fated push into property lending has turned China Minsheng Banking Corp. into one of the biggest casualties of the real estate debt crisis that’s roiling Asia’s largest economy. Battered by mounting losses on loans to developers including Evergrande, Minsheng’s stock tumbled 31% in the 12 months through last week — the worst performance in the 155-member Bloomberg World Banks Index.

Minsheng has about 130 billion yuan ($20 billion) of exposure to high-risk developers, amounting to 27% of its so-called tier-1 capital, the most among big Chinese lenders, Citigroup Inc (NYSE:). analysts estimated in a September research report. The bank will need years to work through its bad debt problem and a capital injection from a stronger rival can’t be ruled out, said Shen Meng, director at Chanson & Co., a Beijing-based boutique investment bank

China Oceanwide has received a default notice on a $1.28 million loan with the lender saying the default triggered an acceleration clause for full immediate repayment in all amounts totaling $165 million, according to a Hong Kong stock exchange filing. The real estate firm said it’s seeking legal advice and making efforts to secure funding to repay the outstanding sums.

Shimao is set to repay a local bond maturing Saturday after the developer received higher-than-anticipated cash inflows from property sales in December, according to people familiar with the matter.

Onshore subsidiary Shanghai Shimao Co. has set aside funds to repay the 4.65% local bond with outstanding principal of 1.9 billion yuan ($300 million), said the people, who asked not to be identified as the matter is private.

Meanwhile, Shimao’s long-term issuer default rating was downgraded by Fitch to B- from BB, citing concerns about its “lower margin of safety in preserving liquidity”.