Surgeons make more mistakes on patients if they are stressed

Surgeons make more mistakes in the operating room when they are under stress or are distracted, a study has found.

Researchers tracked the electrical activity of one surgeon’s heart for signs of stress and video recorded his work to spot mistakes.

They found he made up to 66 per cent more mistakes when he was stressed, which can cause bleeding, tears or burns in patients. 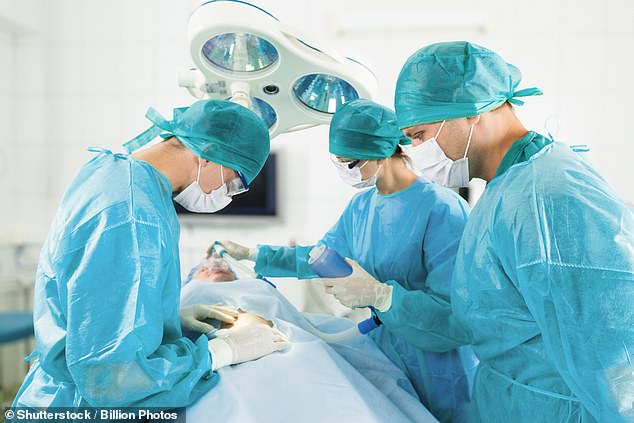 Surgeons make more mistakes, up to 66 per cent, in the operating room when they are under stress, a study at Columbia University has found

‘I was surprised by that, as well as by the amount of distractions in the operating room,’ said lead author and master’s student Peter Dupont Grantcharov, of Columbia University.

‘Many machines have alarms that go off periodically, equipment malfunctions, side conversations take place, people walk in and out of the OR – I could go on.

‘My hope is that other researchers will build upon our work to make further strides in learning about the causes of stress on surgical personnel.’

WHAT REALLY GOES ON IN OPERATING THEATRES?

Surgeons and their assistants argue, flirt, throw things across the room and poke fun at their patients while they are under the knife, research suggested in July 2018.

The social structure of a surgical team has even been compared to that of a family of monkeys.

A researcher from Emory University, Atlanta, sat in on 200 operations and recorded 6,348 conversations.

She found just over one in every 40 interactions between surgical staff is a fight or argument.

Staff also throw rubbish across the room into bins, dance to music and rub each other’s legs flirtatiously.

One reportedly called an unconscious patient ‘gigantic’ and said they would need 10 people to move her.

Another stormed out of an operating room when an assistant accidentally squirted him in the eye with bodily fluids from an infectious patient.

The study suggests status and ‘ego’ is a main cause of arguments in the theatre, which are most likely to occur when high-ranking male surgeons try to exert their dominance.

The main surgeons are almost always responsible, being the cause of 118 out of 175 arguments in the investigation.

Mr Grantcharov added: ‘If our study helps make the OR a safer place for patients, I’d be thrilled.’

He used one participant, Dr Homero Rivas, a surgeon and professor at Stanford Medical Center, for the study.

Dr Rivas wore a Hexoskin Smart Shirt under his scrubs while he operated, which was able to take electrocardiogram (ECG) measurements of his heart’s activity.

Stress triggers could have been anything from a negative thought, an alarm or phone going off, or a distracting conversation.

Video recordings were taken of all 25 of the surgical procedures, including gastric bypasses. They lasted for an average of 96.7 minutes.

Both his stress levels and surgical errors were time stamped so that Mr Grantcharov could correlate the two – which led to his findings.

The research did not conclude what the possible triggers of stress would have been for Dr Rivas.

But Mr Grantcharov said it is now critical to investigate how to manage the potential disruptions which can be controlled.

The results of the study were published in the the British Journal of Surgery.

It comes amid an NHS crisis, whereby pressures continue to mount on medical staff, with stress causing many medics – including surgeons – to reconsider their futures.