said yesterday it has raised $1.25 billion in a financing round spread across two tranches. We spoke to Sriharsha Majety, Swiggy’s cofounder & CEO as well as SoftBank’s Sumer Juneja on the company’s plan to use the money to fuel its ambition beyond food delivery. All of this as its rival Zomato makes a big splash in the public markets. 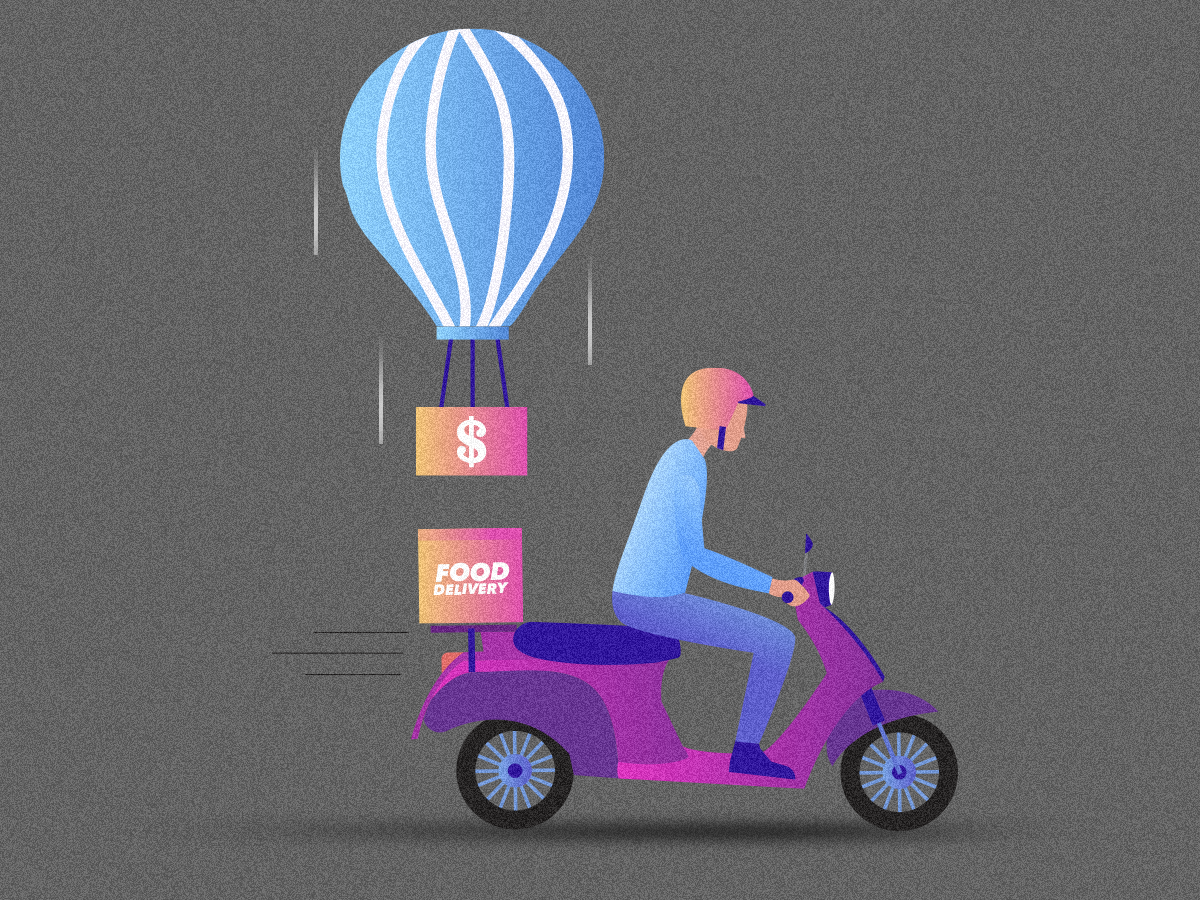 Swiggy has raised $1.25 billion from SoftBank Vision Fund and existing investors, days after archrival Zomato launched its domestic IPO, which coincidentally also looked to raise $1.25 billion (Rs 9,375 crore). The issue was subscribed more than 40 times over.

The latest funding values Swiggy at $5.5 billion and was done in two tranches: 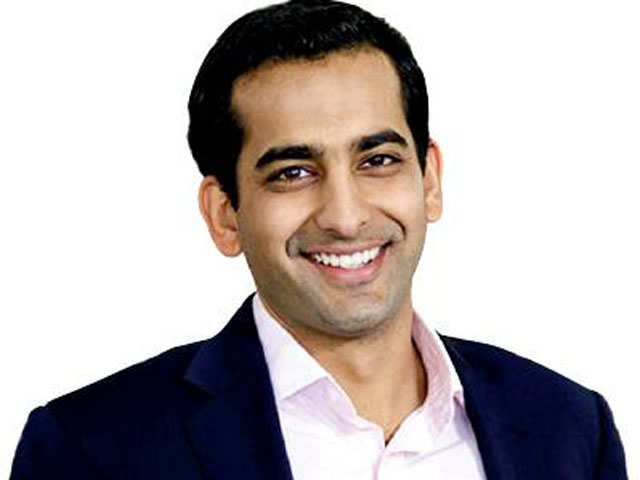 What probably tilted SoftBank towards Swiggy were its ambitions, sources told us. “We’ve always viewed Swiggy not as a food delivery company but as the last-mile convenience and logistics player with an unparalleled competitive advantage,” said Sumer Juneja, partner at SoftBank Investment Advisers.

Beyond food delivery: Swiggy will use the funds to aggressively invest in businesses other than food deliveries, especially its hyperlocal grocery service Instamart, cofounder Sriharsha Majety told us.

About a quarter of Swiggy’s revenue comes from such businesses. Apart from Instamart, it runs a subscription-based morning essentials delivery business called Supr Daily, and a pick-up and drop service for all types of parcels, called Genie. 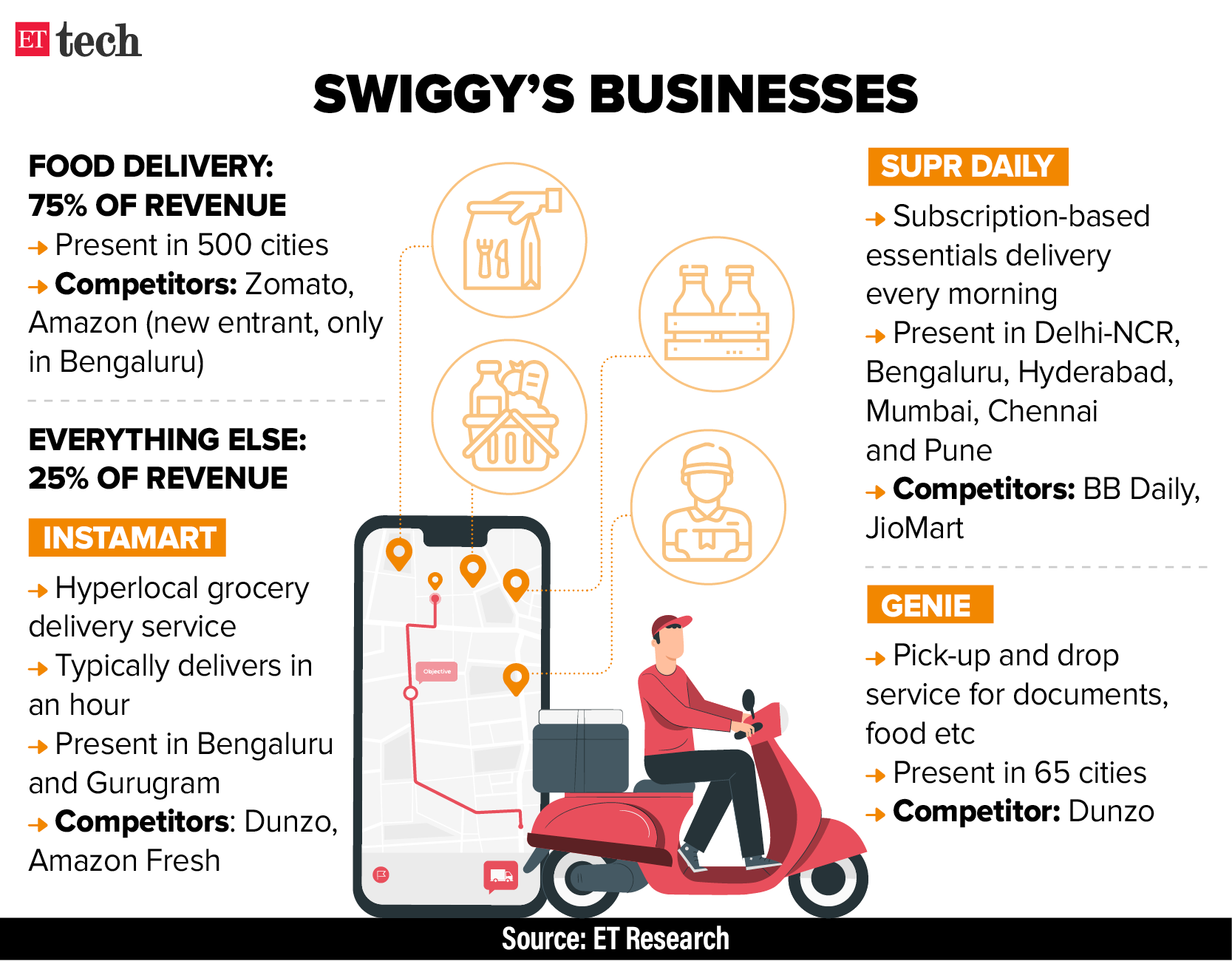 Competition for essentials: Earlier this month, Zomato had sought an approval from India’s competition watchdog to acquire a 9.3% stake in online grocery Grofers for a primary investment of Rs 741 crore.

Tata Digital-owned BigBasket meanwhile is planning to bring back express deliveries — typically within an hour — after years of experiments in this vertical. Other players with deep pockets such as Amazon India, Walmart’s Flipkart and Reliance’s Jiomart are also building their grocery businesses.

Amazon has been dabbling in food delivery in India since last year, but the service is still restricted to certain parts of Bengaluru. 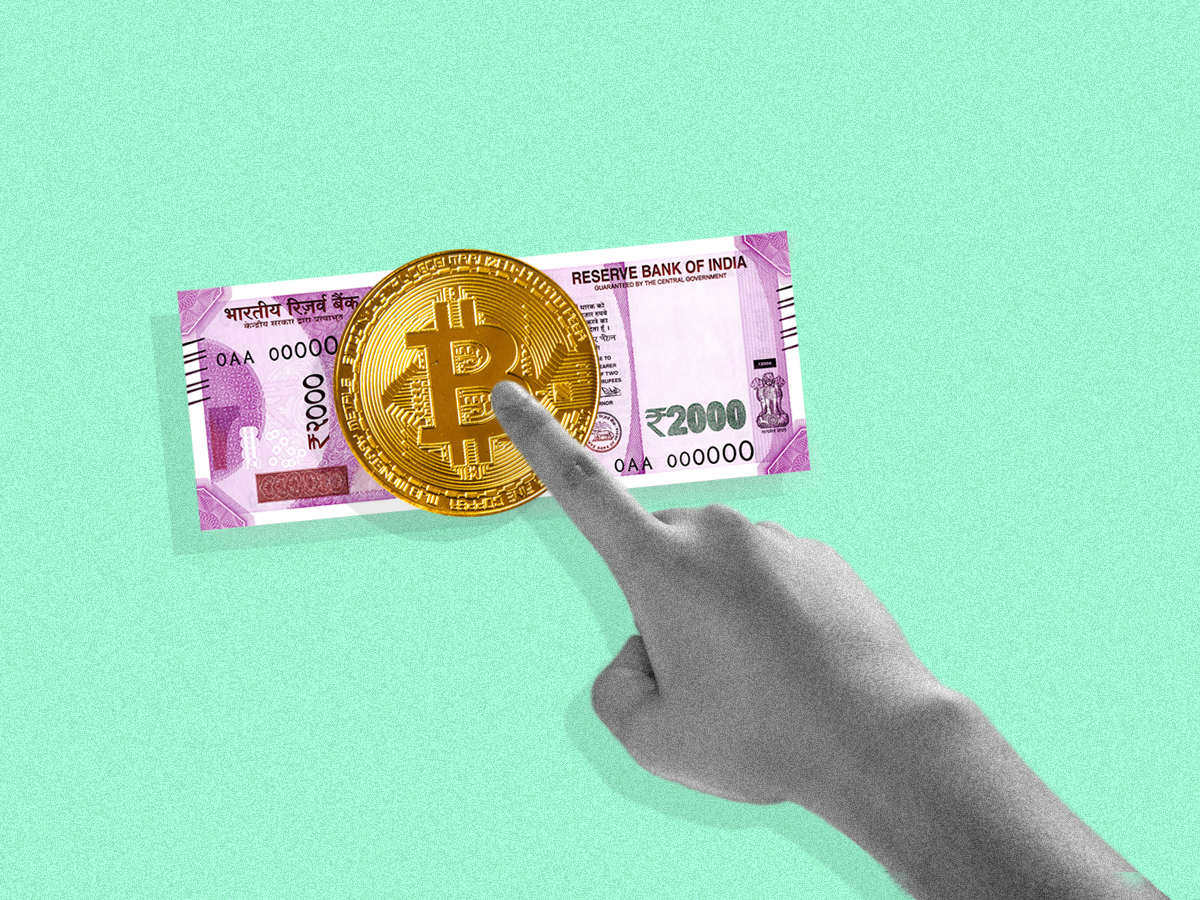 The Income Department has asked cryptocurrency exchanges for details of all trades conducted on their platform, and their finances, so it can tax the profits they made during the year-long crypto bull run.

A fortnight ago, the I-T Department sent notices to at least three exchanges, asking for these details.

Deja vu: The tax department had sought similar information in December 2017, when Bitcoin had hit a new peak.

“It’s a routine action to collect information and ascertain activity — particularly as we have become faceless,” said a senior tax official.

“The department has also asked us to give the financials of the exchange. But we think the focus may be on the users as they already have information about the exchanges,” said an executive at a crypto exchange. 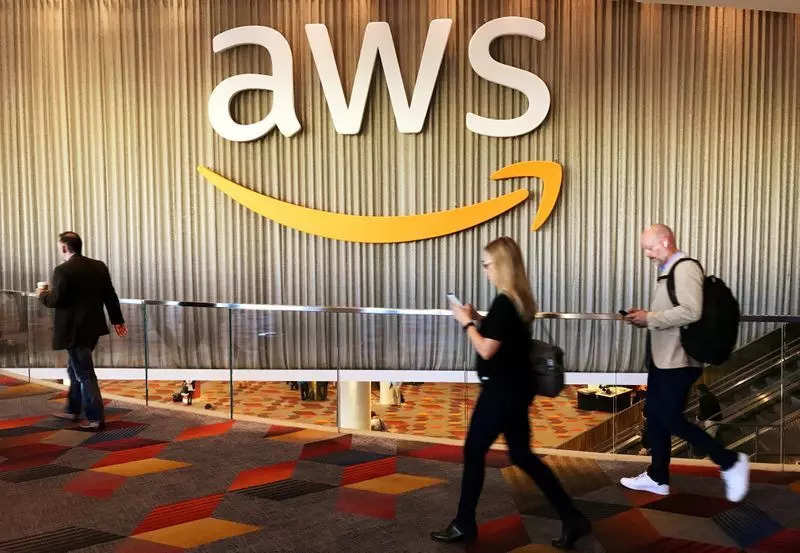 Cloud services provider Amazon Web Services (AWS) has shut down infrastructure and accounts linked to Israeli surveillance firm NSO Group following allegations that its Pegasus spyware was used to target politicians and journalists in many countries, including India.

On Monday, a consortium of media organisations such as The Washington Post, The Guardian and The Wire reported that Pegasus, which is only sold to governments, was being used by governments to potentially snoop on more than 50,000 people in 50 countries, including India. On the list were 300 verified phone numbers in India, including those of two serving ministers, three opposition leaders, a sitting judge, more than 40 journalists, and scores of activists and business persons.

Acted quickly: Amnesty International’s Security Lab conducted digital forensics on over 60 numbers on the list, and found that the NSO Group had used the Amazon CloudFront service.

Amnesty said it had reported this information to Amazon, and that AWS had “acted quickly” to shut down the infrastructure and accounts.

“We shut down the infrastructure referenced in this report (by Amnesty International) that was confirmed to be supporting the reported hacking activity, in accordance with our terms of use,” an AWS spokesperson said in a statement.

ETtech explainer: What is Pegasus?

Pegasus is a piece of spyware developed by NSO Group, an Israeli company, which markets it as a tool to conduct surveillance of criminals and terrorists.

Pegasus isn’t any ordinary spyware, though — it’s perhaps the most powerful spyware even created. Designed to infiltrate smartphones, it can infect both Androids and iPhones and turn them into 24-hour surveillance tools.

It is intended for targeted spying and not mass surveillance.

NSO Group only sells Pegasus to governments. A single license, which can be used to infect many smartphones, can cost up to Rs 70 lakh.

Pegasus exploits undiscovered vulnerabilities, or bugs, in Android and iOS. This means a phone could be infected even if it has the latest security patches installed.

The earliest known version of Pegasus, from 2016, infected phones through “spear-phishing” – that is, sending messages or emails with a malicious link. It thus depended on the target clicking the link — a requirement that was done away with in subsequent versions.

By 2019, the software could infiltrate a device with a simple missed call on WhatsApp. It would even delete the record of this missed call, making it impossible for the user to know they had been targeted. In May that year, WhatsApp said Pegasus had exploited a bug in its code to infect more than 1,400 Androids and iPhones this way, including those of government officials, journalists and human rights activists. It soon fixed the bug.

Read More   Stranded in a Hurricane? There's an App for That

If that isn’t frightening enough, get this: Pegasus can also be installed over a wireless transceiver (radio transmitter and receiver) located near a target.

What can it do?

Once installed on a phone, Pegasus can intercept and steal more or less any information on it, including SMS messages, address books, call history, calendars, emails and browsing histories.

It can use your phone’s microphone to record calls and other conversations, secretly film you with its camera, or track you with GPS.

September 2018: The Citizen Lab published a report that identified 45 countries in which Pegasus was being used. As with the latest revelations, the list included India.

October 2019: WhatsApp revealed that journalists and human rights activists in India had been targets of surveillance by operators using Pegasus.

July 2021: The Pegasus Project, an international investigative journalism effort, revealed that various governments used the software to spy on government officials, opposition politicians, journalists, activists and many others. It said the Indian government used it to spy on around 300 people between 2017 and 2019. 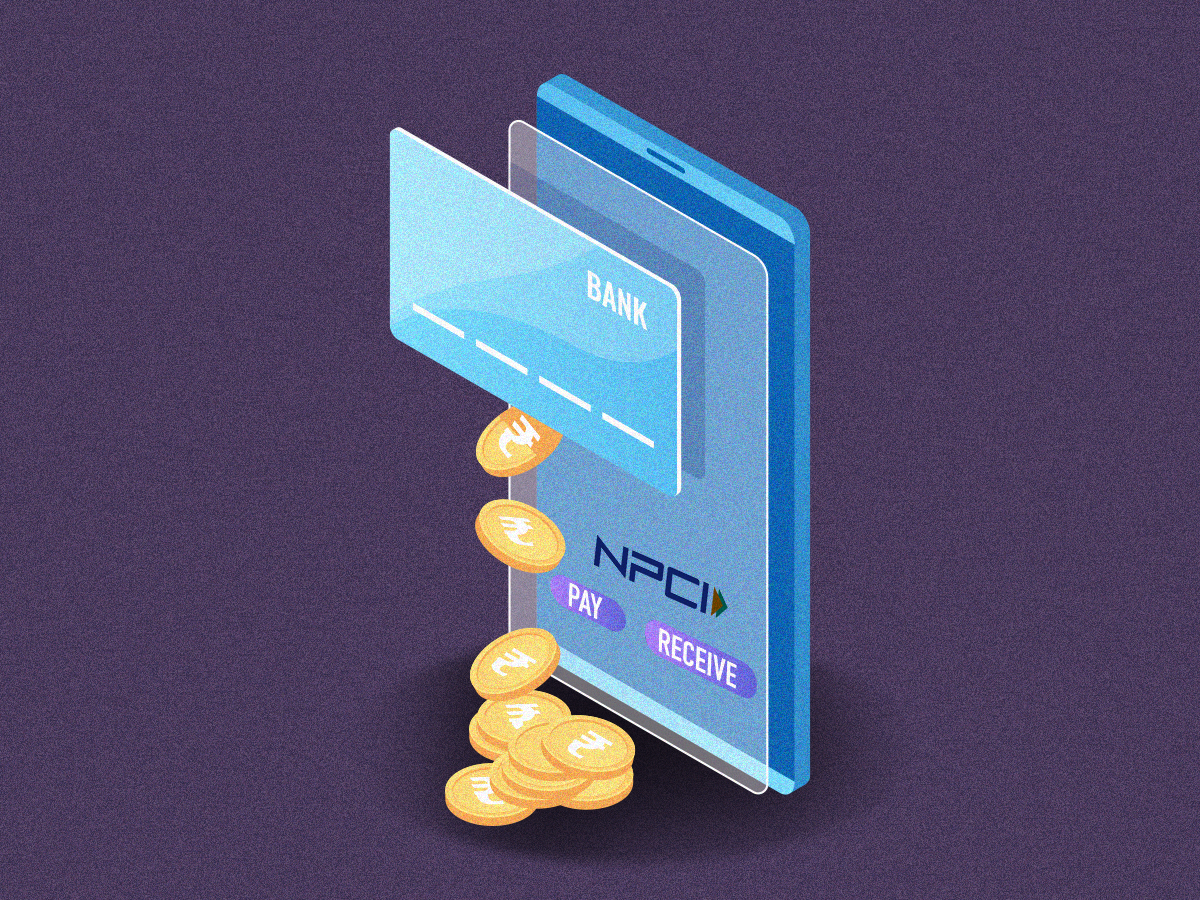 Why is it significant? The service will allow users of feature phones to make merchant payments as well as peer-to-peer (p2p) transactions by simply generating an authentication PIN linked to their bank account and debit card as well as the registered mobile number.

Both NPCI and RBI are learnt to be testing various feature phone-based payment solutions that cut the need to have an internet connection or an expensive authentication device like biometric scanner or point of sale (PoS) device, a source told us.

■ Google’s YouTube has agreed to buy video shopping app Simsim as it looks to help users find and buy products from Indian retailers. Simsim counts Shunwei Capital and Partners among its investors and has raised around $16 million so far.

■ Julia Computing, cofounded by Viral Shah, who is best known for co-creating the Julia programming language, has secured $24 million in Series A round led by Dorilton Ventures, with participation from Menlo Ventures, General Catalyst, and HighSage Ventures. The money will be used to further develop and advance its secure, high-performance JuliaHub cloud platform, and to grow the Julia ecosystem. Former Snowflake CEO Bob Muglia will join the startup’s board.

■ Vegrow, a business-to-business agritech platform for fruits and vegetables, has raised $13 million in a Series A funding round co-led by Lightspeed Venture Partners and Elevation Capital. Vegrow’s platform helps from farm discovery, produce quality profiling, market intelligence to smart matchmaking between farm-level inventory and customer requirements.

■ Open Secret, a health and nutrition-focused snacks startup, has raised an undisclosed sum led by Sixth Sense Ventures as part of its Series A funding round. Existing investor Matrix Partners India also participated in the capital raising.

After Branson, Bezos flies to edge of space 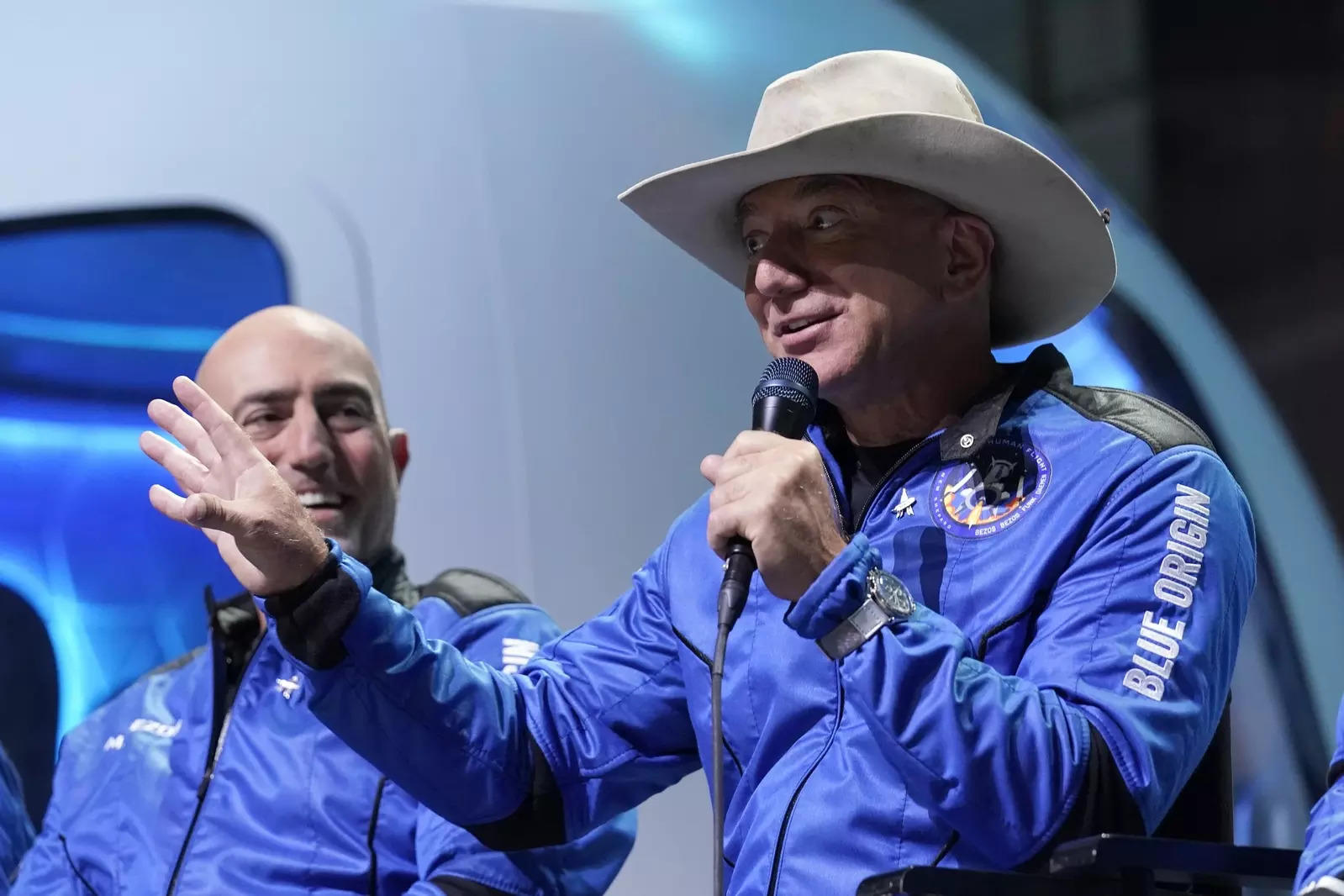 Jeff Bezos, the world’s richest man, flew to the edge of space on board his company Blue Origin’s New Shepard launch vehicle on Tuesday and returned safely to Earth.

This was nine days after fellow billionaire and rival Richard Branson reached the edge of space on his Virgin Galactic’s VSS Unity spaceplane.

Bezos’s journey coincides with the 52nd anniversary of the Apollo 11 moon landing, when astronauts Neil Armstrong and Buzz Aldrin became the first humans to set foot on the moon.

Richest, oldest, youngest passengers: Bezos was accompanied by his brother Mark Bezos and 82-year-old aeronautics legend Wally Funk, who became the oldest person ever to fly to the edge of space. The fourth passenger, an 18-year-old Dutch teenager Oliver Daemen, is the youngest.

Other Top Stories We Are Covering

Client spending is on the up, says HCL’s Vijayakumar: may have begun the financial year on a slow note compared to peers TCS and Infosys, but it is confident of doing better in the following quarters. In an interview with ET, chief executive and managing director C Vijayakumar said booking numbers and hiring trends are better metrics to gauge the future.

Wipro to invest $1 billion in cloud business: Wipro, India’s fourth-largest IT services company, on Tuesday announced its plan to invest $1 billion over the next three years in building capabilities around cloud technologies, including for acquisitions and partnerships in the space.

Global Picks We Are Reading 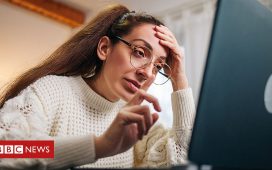 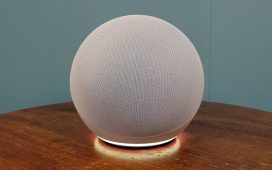 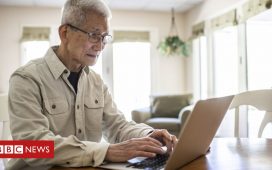 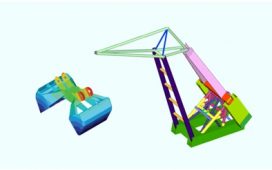 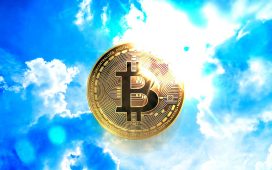