Shares of the company, formerly known as Coach, rose nearly 12 percent, as investors reacted to signs the company’s efforts to improve its performance are gaining traction heading into the holiday season. Tapestry has launched a men’s line, which performed well during Father’s Day, and has tried to shore up its other brands.

Here’s what the company reported compared with what Wall Street was expecting, based on a survey of analysts by Thomson Reuters:

Tapestry acquired Kate Spade last year in a $2.4 billion deal but has struggled to rein in the heavy discounting that has eaten into the brand’s sales. To help re-establish the quirky hand bag’s position as affordable luxury, rather than a mass product, it has been focusing on selling more in department stores, rather than outlets.

Tapestry said Tuesday that Kate Spade’s fourth-quarter results “exceeded” its expectations on the top and bottom lines. Same-store sales for the brand were down 3 percent, much less than an expected drop of 7.1 percent.

The death of the namesake founder in June stoked nostalgia for the brand and boosted sales. Although that trend is an anomaly, there are signs that the efforts the company has made to rebuild brand equity are helping to improve profit margins and improve revenue.

“In our view, the brand is now in a better position and should start making a solid top and bottom line contribution over the next fiscal year,” said Neil Saunders, managing director of GlobalData Retail, in a written statement.

Tapestry’s biggest brand, Coach, reported net sales of $1.10 billion for the fourth quarter, up from $1.05 billion the same quarter a year earlier. It reported same-store sales growth of 2 percent, less than the 2.1 percent estimated.

Saunders said Coach’s Signature line has been well-received by shoppers and has helped drive both sales and interest in the brand.

Its Stuart Weitzman brand continued to be plagued with execution issues like delivery delays, which the company had flagged last quarter. Sales for the unit were $73 million during quarter, down from $88 million a year earlier. On a full-year basis, sales were flat. The shoe business reported a loss of $21 million for the quarter.

Tapestry said Tuesday it expects the premium shoe brand to return to top-line growth in the second quarter of its next fiscal year.

For fiscal 2019, Tapestry said it expects to generate $6.1 billion to $6.2 billion in revenue, surpassing expectations of $6.08 billion. 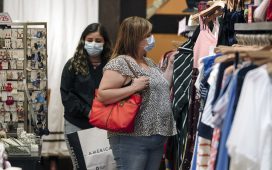