December is kicking off with a bullish tone. The Dow Jones Industrial Average, S&P 500, and Nasdaq Composite all wrapped the week at record highs. Even a worse-than-expected U.S. jobs report couldn’t hold the market back. Tech stocks were a major driver of the market’s gain during the week, with many growth stocks soaring sharply. 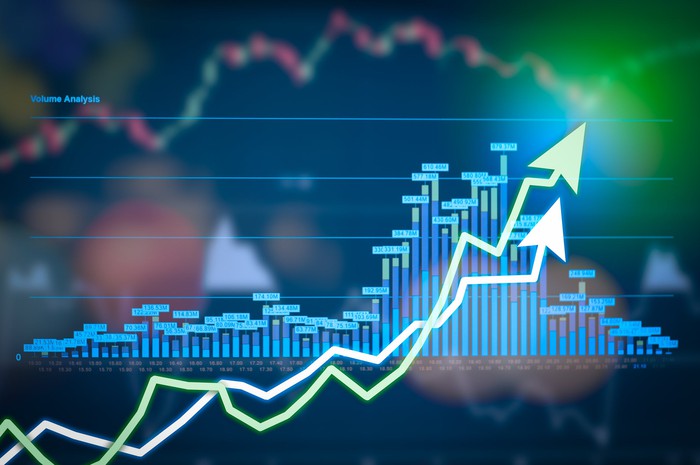 Cloud-based data management company Snowflake has arguably been 2020’s hottest initial public offering (IPO). After going public in September, the stock wrapped up its first trading day as the biggest software IPO in history. With so much hype, expectations were unsurprisingly high going into Snowflake’s debut quarter as a public company.

And it delivered. Fiscal third-quarter revenue soared 119% year over as total customers came in at 3,554. Of these customers, 65 generate trailing-12-month revenue greater than $1 million each for Snowflake. Quarterly revenue of $159.6 million blew past analysts’ average forecast for revenue of $147.5 million.

Shares initially fell sharply in after-hours trading on Wednesday, when Snowflake reported third-quarter results. But shares proceeded to recover and then soar. The growth stock finished the week up a total of 18%.

“As companies accelerate the digital transformation of their business and agreement processes, DocuSign’s role as an essential cloud platform continues to grow,” said CEO Dan Springer in the company’s earnings release. “Our Q3 results reflect that tailwind, as well as the immediate and long-term value that customers see from eSignature and our broader Agreement Cloud.”

Free cash flow was $38 million, up from negative $14.1 million in the year-ago quarter.

DocuSign stock rose a total of 7% this week.

Shares of Fastly jumped 7% on Friday on rumors of a potential buyout. Citing vague takeover chatter from Cisco, StreetInsider said that the larger networking company could be working on a deal to buy edge-computing company Fastly.

While there could be synergies from such a deal, investors shouldn’t consider it a sure thing until there’s official news.

All three of these companies have demonstrated impressive business performance this year. Nevertheless, investors interested in any of these companies should go beyond these news stories, conducting thorough due diligence, before investing.

10 stocks we like better than DocuSign
When investing geniuses David and Tom Gardner have a stock tip, it can pay to listen. After all, the newsletter they have run for over a decade, Motley Fool Stock Advisor, has tripled the market.*

David and Tom just revealed what they believe are the ten best stocks for investors to buy right now… and DocuSign wasn’t one of them! That’s right — they think these 10 stocks are even better buys.

WandaVision release dates: When does each episode air on Disney Plus? – CNET

Elon Musk wants you to use Signal instead of Facebook. Here's how the app works – CNET

From touchless to high-tech, the smart home at CES 2021 reflected the times – CNET