Micromobility is evolving in a northern suburb of Atlanta, Georgia, where the sight of an electric scooter rolling down the street without a rider is likely causing more than a few double-takes. The City of Peachtree Corners has launched an experiment with partner companies Tortoise and Go X to deploy 100 scooters that can be remotely operated.

The Go X Apollo service allows riders to order a scooter via a mobile app. The scooter comes right to them, and when they’re finished it returns to a station on its own. The experiment is a first step toward developing fully autonomous scooters. But even in this phase, participants hope these remote-controlled scooters can address many of the operational and environmental issues that have plagued the micromobility industry over the past few years.

“In metro Atlanta, traffic is a major concern for everyone,” said Brandon Branham, assistant city manager and chief technology officer for Peachtree. “We didn’t have [microbility services], and we wanted to change that. But how do you do that in a way that we’re not fighting issues that downtown Atlanta and others see with the clutter and the other issues brought by doing this?”

Micromobility options such as electric scooters and dockless bikes have been popping up around the globe as companies like Lime and Bird raised more than a combined $1 billion in venture capital. The idea is for electric scooters to get people out of their cars and help cities reduce traffic and pollution. But amid the scooter boom came a surge in complaints and frustrations from affected communities.

The scooters tended to pile up in limited locations, cluttering the city and blocking pedestrian paths. The chaos also made them inconvenient for riders and forced companies to contract people to retrieve the scooters, charge them, and then redistribute them to more locations. Companies typically lose money on each ride, due to the cost of maintenance and replacement. And cities received growing complaints about piles of scooters becoming eyesores, creating problems for people with impaired mobility and contravening Americans with Disabilities guidelines (ADA) by blocking sidewalks, and frustrating residents who resented out-of-control scooter riders.

Lime, Bird, and others have said they are addressing these concerns, and cities are also implementing new regulations. But the founders of Tortoise thought they could address many of these problems by making scooters more predictable and convenient for riders and cities alike.

Tortoise cofounder David Graham once built a lawnmower that used a combination of remote and autonomous technologies with only $100 in off-the-shelf hardware. Last year, he teamed up with Dmitry Shevelenko to adapt this system to electric scooters.

Graham and Shevelenko aren’t the only ones with this idea. Singapore-based robotics company CtrlWorks had developed a project called Scootbee that built autonomous scooters. But after a brief test in Malaysia, it appears Scootbee has shut down. There were also rumors that Uber had a self-driving scooter in the works. And in August 2019, Segway-Ninebot introduced the autonomous KickScooter T60, though it doesn’t appear to be operational in any cities yet.

So for the moment, Tortoise appears to be leading the pack. The company took existing scooters and retrofitted them with an additional camera, more powerful processors, and retractable training wheels (rather than a kickstand) to make them more stable when they are moving without a rider. Tortoise then launched a remote operations center in Mexico City, from which staff can remotely control the scooters and guide them down streets, either to a rider or back to the bike station.

Shevelenko said remotely repositioned scooters offer a number of advantages. First off, they are better for the environment because companies don’t need to drive around picking up and redistributing the vehicles. That also helps with the unit economics and durability because the scooters don’t get thrown down and knocked over when they aren’t being used.

The current platform would allow the scooters to run autonomously for about 30% of their trip, but the company has opted not to turn on that functionality for now. Shevelenko wants cities and residents to get accustomed to seeing riderless scooters in their community before implementing that feature.

“Our goal is to crawl, walk, run,” he said. “We don’t want it to be a shock when you start using that autonomy software.”

Even when Tortoise does activate the autonomous features, the company anticipates it will continue to use the teleoperation center for the bulk of the scooters.

Tortoise’s business model is built on “repositioning as a service.” This allows other companies to build the Tortoise platform into their scooters and apps. The system is mainly a reference design that anyone can use to adapt their own scooter fleet. Tortoise then charges a per-minute usage fee to remotely reposition scooters.

“That’s why we picked the name ‘Tortoise,’” Shevelenko said. “They move slow. They win. And they live a long time. If you’re trying to build a 100-year company and you depend on the public rights of way, you have to get off on the right foot with public regulators.”

Peachtree Corners is about 20 minutes from downtown Atlanta and has 45,000 residents. It has become one of the region’s most dynamic economic development hubs, in part because it’s home to Technology Park Atlanta, a business center designed to attract innovative companies. The park includes Curiosity Labs, an incubator focused on mobility and smart cities. It has created a 1.5-mile testing track for autonomous vehicles and partnered with Sprint to roll out a 5G network that is already operational. As a planned community that’s home to innovative companies, Peachtree is an ideal testbed for these new scooters.

Go X is offering the initial phase of the service to the 8,000 employees working within the 500-acre office park. Go X manages the scooters for the city of Peachtree, and its app makes an API request to the Tortoise system. The local terrain is mostly flat, but a 13% grade at one section of the autonomous testing track presents an additional challenge as Tortoise and Go X put the system through its paces

As the launch is coinciding with the coronavirus pandemic, Go X and the city had to adapt some of their original plans. Adjustments include periodically sanitizing the scooters. Go X CEO Alexander Debelov said the network has 20 docking stations and a local employee will be notified when 10 or more scooters need to be disinfected. The company expects scooters will need to be disinfected two to three times a day, Debelov said.

Even at that rate, operational costs will be much lower than for traditional scooter-sharing ventures because Go X won’t need to contract numerous people to retrieve the scooters and recharge them, according to Debelov.

From the perspective of Peachtree officials, the experiment is a chance to get ahead of potential traffic issues. The Atlanta Tech Park is near hotels, restaurants, and various other shops that employees and local residents can access via the Go X scooters during the day. Eventually, the service will be rolled out to the entire city. It will hopefully be directly connected to public transportation options for getting into and out of Atlanta.

“Once we get through that phase and we feel confident, we’ll expand it,” Branham said. “Downtown is about a mile and a half north of the testing facility. And so we’ll add those connection points between there and [Atlanta Technology] Park and then finally roll it out into the citywide residential and business side.”

The Go X scooters also offer an opportunity to burnish Peachtree’s reputation as a tech hub. Other mobility companies, such as Local Motors, are already testing autonomous shuttles in the city. In shaping regulations around scooter-sharing, the city included requirements that services have an autonomous or remote-controlled option.

“The city took an aggressive approach,” Branham said. “We know we need this, but how do we do it and not face the problems other cities have had?”

Now that GoX and Tortoise have soft-launched, part of the mission becomes educating residents about the technology. The city went through a similar exercise when it started testing the Local Motors shuttles. For that trial, Branham organized events and invited the public to try the shuttles and learn about the technology.

The same will likely happen with the scooters. In part, autonomous or remote-controlled vehicles are a social experiment. How quickly will people accept them? What are the factors that make them seem more or less reliable? The city has been posting information on its social media accounts and has created a dedicated spot on its website to provide information and updates.

“The faces and looks you get when you see that scooter driving down the road by itself, it’s fun to watch them,” Branham said. “We were doing some testing, and some 15 cars drove by and they all stop and they’re staring.”

The success of this venture could determine to a large degree how quickly other cities embrace similar experiments.

“I think we are really paving the way,” Branham said. “I’ve had a ton of phone calls from other cities and been on the phone a lot, just working through this with other cities. All cities are competing against each other for economic development. But when it comes down to it, we’re all after the same thing, and that’s providing a better service to our residents and our businesses.” 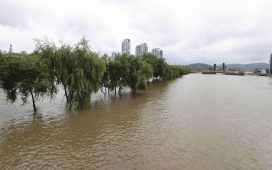