Tesla delivered a record number of electric cars in the first three months of 2020, boosted by demand for its new Model Y.

The US company led by billionaire Elon Musk delivered 88,400 vehicles, compared to 63,000 a year previously. 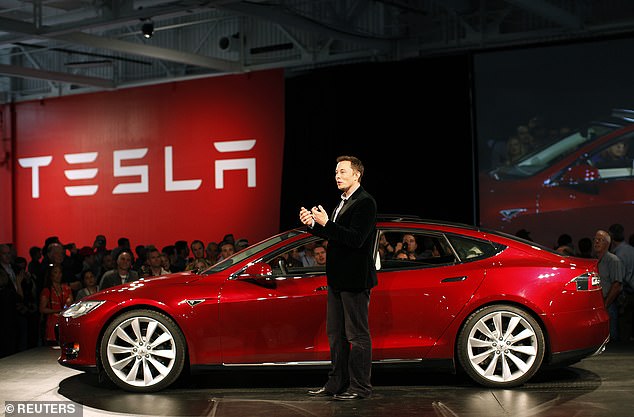 Booming: The US company led by billionaire Elon Musk (pictured), delivered a record number of electric cars in the first three months of 2020

The total beat Wall Street’s predictions, though most analysts had revised their forecasts down from 95,528 to 79,908 because of the coronavirus crisis after Tesla’s Fremont, California, factory shut on March 24.

Production and delivery of its Model Y ‘crossover’ vehicle – a mix of a sports car and SUV – is ahead of schedule. Deliveries began in March, earlier than predicted.

Wedbush analyst Daniel Ives said the figures were ‘better than feared in a Covid-19 environment’.

But he added: ‘Clear challenges remain in the months ahead.’

Demand for the Y is set to be higher than for all Tesla’s other models combined as there is strong demand for SUVs and it is cheaper than the Model X.

But the shutdown at its factory is likely to affect production of the Y, though Tesla’s Shanghai factory in China has continued to achieve record levels of production.

How Does the New Toyota Hilux Compare to the Tacoma?

Brit drivers face £1,000 fine if they pay for burgers with their phone at McDonald’s and other drive-thru restaurants

Aston Martin axes 500 jobs after sales slump due to coronavirus