Tezos is continuing its winning streak from last year.

The “Dormancy” metric measures the average time #XTZ was held before it was transacted.

Tezos’ dormancy is at the highest point it’s been since November — during its last price surge. This indicates that #XTZ should consolidate around current levels. https://t.co/ENrUPMuYsg

Meanwhile, these gains have the crypto asset jumping to 12th rank as per market capitalization of $1.45 billion and are yet again getting ready to join the top 10 crypto list.

Just like price, the on-chain transaction count of Tezos reached a yearly high this past week.

Staking Reaches to ATH at Nearly 80%

Launched in Sept. 2018, Tezos is a proof of stake (PoS) consensus model, which has been one of the most successful initial coin offerings (ICO) of all-time, raising $232 million in 2017 token sale.

Last year, BTG Pactual bank of Brazil and Dubai-based asset manager Dalma Capital announced that they would use Tezos blockchain for security tokens.

Its token Tezos (XTZ) is issued by the Tezos network and is used to vote on the network’s governance decisions and pay for transaction and smart contract fees.

XTZ can also be staked to support the operations of the blockchain network. Throughout Jan. 2020, custodial staking gained traction with stacked balances at exchanged increasing by 1.3% (26 million) to 14% (89 million) of all stake coins.

Staking participation overall increased by 18 million to reach a new all-time high of nearly 80%. As a result, staking yield dropped to an all-time low of 1.48% above inflation.

“At current prices you needed to stake 1.2M tez to make a base income for a decent living in Berlin,” said Alexander Eichhorn, Founder at Blockwatch Data. 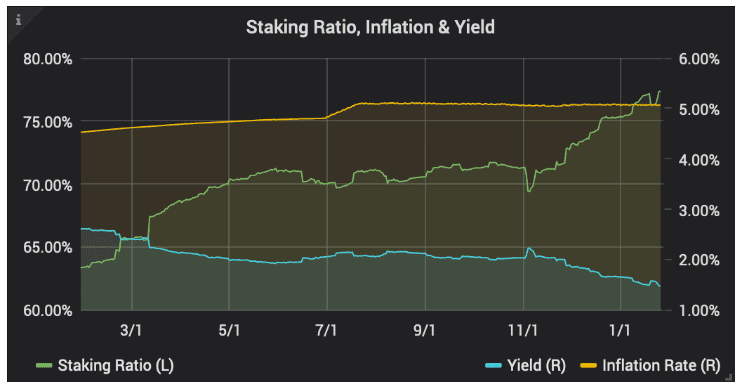 Over 50% of XTZ Staking Controlled by only 9 Entities

Despite this drop in yield, the number of bakers remains relatively stable at around 430, with 50% of all validators self-baking entities, 160 of them owning less than 100k tez in staking balance, and 10 self-bakers being the whales with a balance between 1-5 million tez. Eichhorn said,

“Although the amount of unique validators is high (430) the distribution of their weight tells a slightly different story. 50+% of Tezos staking is controlled by only 9 different entities while the top 100 bakers control 92% of the network.”

Staking might be gaining speed but the smart contacts’ usage on Tezos mainnet is not. Throughout Jan. there were only 55 new contracts and 3.5k contract calls, with the most prominent deployed by StakerDAO. He wrote,

“The real action in Tezos still happens on various testnets hinting at a quickly growing developer base (…) and an unprecedented growth in smart contract calls.”

What is an Initial DEX Offering (IDO)? How is it Different Than ICO & IEO? – CryptoPotato