If there was any initial reticence about him investing in the cosmetic surgery industry, entrepreneur Alan Sugar appears to have put that firmly behind him as he stands beaming next to his protégé Dr. Leah Totton.

This month, The Apprentice 2013 winner has proved her business idea of launching cosmetic skin care clinics offering safe cosmetic procedures to the public as well as a discreet service to VIP guests was a good one.

Totton’s Dr. Leah brand has done well out of the £250,000 prize money awarded to her after winning the reality talent game show.

The clinic’s turnover has grown to £1.6million a year and is also reporting profits of £400,000 a year – and this may grow further still with a new location. 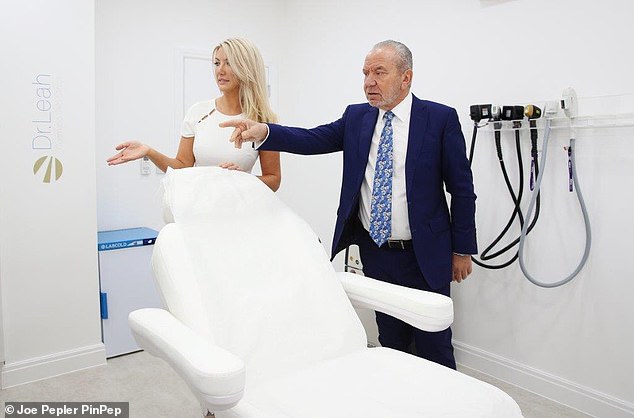 Help: Dr. Leah says Lord Sugar holds regular board meetings and offers advice to all the winners of The Apprentice

Often referred to as the ‘Botox queen,’ – Dr Leah, as she prefers to be known – makes it clear to This is Money the growth has been organic and that she’s garnered no more financial support from Lord Sugar since winning The Apprentice six years ago.

‘So any scale we have is organic growth and we generate our own profits.’

This means that she’s had to defer her dream of having a Baker Street clinic, which cost £600,000 to create, and put it on hold for a couple of years – instead creating a presence in Moorgate, London and Loughton, Essex.

She says: ‘We couldn’t afford a clinic in this area with £250,000 so it’s taken about three to five years to afford it on this scale. 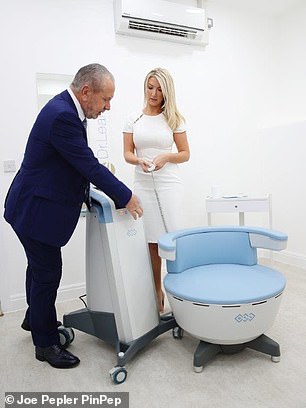 ‘If you are going to do this then you should do it properly and I wanted a big presence here.

‘To have a clinic like our Baker Street one within the medical district of central London was always been a dream of mine.’

While there’s no more financial gain to be made from Lord Sugar, what he does offer is his own time.

By taking a 50 per cent stake in the business he ensures he keeps time free in his diary to have a board meeting once a month.

But Dr. Leah assures she speaks to him more regularly than that.

She says: ‘All the apprentices have that. He’s very involved in all of our businesses.

‘He was here this morning. He’s mentored me for six years and any business queries I have he’s my first go to.

‘I spoke to him a lot in the run up to this about planning permission, the legality of leases – he’s a massive commercial landlord so he and his team have been incredibly helpful.’

The Baker Street based clinic building has been leased but that it’s gone through a substantial cosmetic change of its own.

The interior walls and equipment are all luminously white but there’s a reason for its blinding colour.

I called him crying and hysterical. And he told me to pull myself together and that people will come to us because we’re going to be the better clinic.

‘We stripped it back to brick and completely rebuilt it across the two stories to medical spec as we do minor ops here.

‘It’s a medical floor and has to meet the clinical spec so it was not the straightforward fit out. We used a very good contractor.

The UK and global cosmetic industry is big business.

According to the British Association of Aesthetic Plastic Surgeons (BAAPS) 28,000 procedures took place in 2018.

The biggest increases for women were for liposuction, which rose 12 per cent and face-lifts, which saw an increase of nine per cent.

BAAPS weren’t able to provide figures to give an idea of the size of the cosmetic industry, but it’s a sector especially fuelled by celebrities and influencers keen on keeping up appearances and using the industry to boost their own bottom line through promotions and endorsements.

But Dr. Leah says she doesn’t accept business from any clientele. In fact, she’s vehemently against youngsters getting cosmetic procedures done and relays how she’s turned away parents who bring in their teenage daughters for a consultation. 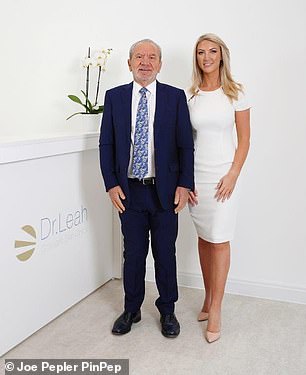 She’s often had to correct surgeries that have gone wrong thanks to an industry that is not regulated but that often targets a vulnerable generation that are influenced into having a perfect a perfect selfie image to promote on social media.

She explains: ‘The cosmetic sector is completely unregulated, which means it is perfectly legal for a non-medical person with no training whatsoever, to purchase dermal filler online and inject it into someone’s face.

‘Over the past few years we have seen the stigma around cosmetic treatments decrease dramatically particularly in the 25 and under age group with demand for cosmetic procedures increasing within this group who see procedures glamourised on social media and on reality TV shows.

‘The majority of revision cases I see are clients under the age of 25 who have had botched work performed by non-medical professionals on cut price deals and the outcomes can be devastating.

‘It is a worrying trend, there is a lot of pressure on young people to look “selfie” perfect and young people are putting themselves at risk in order to do so.’

Managing her own business has enabled Dr. Leah to care less about what the competition does but it’s taken her a while to realise the advantages of this approach.

When asked about the best advice Lord Sugar ever imparted with her, Dr. Leah says that it was to ‘ignore what everyone else is doing and focus on yourself’.

She relays how she called him just before her first clinic opened because the dentist next door had changed his practice to one that offered cosmetic services too.

‘I called him crying and hysterical.

‘And he told me to pull myself together and that people will come to us because we’re going to be the better clinic and focus on how good we can be in the business.

‘I really have done that. I can’t tell you what my competition charge and I don’t think about them.’

Sebi pulls up Prabhat Dairy for non-cooperation with auditor; asks it to deposit Rs 1,292 cr