The charity donation websites that take a cut of your kindness


The charity donation websites that take a cut of your kindness: The hidden transaction and processing fees – and why you should tick the Gift Aid box

Charity donation website MyDonate, run by BT, is pulling the plug on its service this month because it is struggling to survive in a cut-throat market.

Abandoning the service on June 30 means that 12,000 charities which depend on it will now have to find other donation platforms to help them raise cash.

Charities increasingly rely on such websites as they make it easy for people to give money to a good cause. 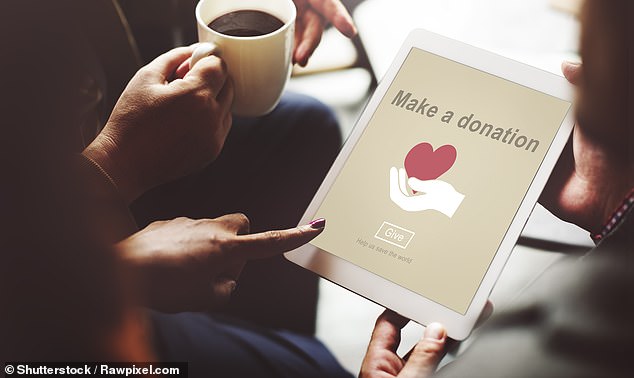 What many people do not realise is that charity website providers, including JustGiving and Virgin Money Giving, make money by siphoning off donated money into their own pockets

The websites allow fundraisers to advertise events they are participating in – for example a sponsored run – along with a link so that donations can be made instantly online.

But what many people do not realise is that the majority of website providers, including JustGiving and Virgin Money Giving, make money by siphoning off some of the hard-earned donated money into their own pockets.

JustGiving was forced to drop a 5 per cent fee on donations in March after being criticised for profiting from fundraising following disasters, such as the concert terrorist attack in Manchester and Grenfell tower fire, both two years ago.

On top, it cheekily suggests: ‘Adding a small contribution on top of your donation means we can continue to help more people.’

You can ignore this – it goes to JustGiving. The donation website also collects at least £18 a month from individual charities for allowing their fundraisers to use its service. It is hoping to entice charities that previously used MyDonate by offering the first three months for free with a special deal ending next month. 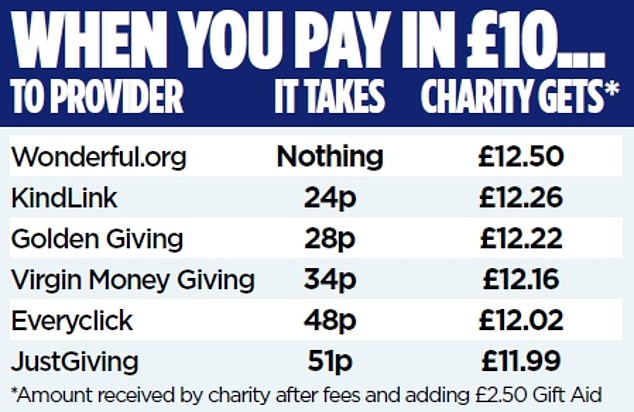 Virgin Money Giving has a 2 per cent ‘transaction fee’ and 1.45 per cent ‘processing fee’. In addition, any charity that agrees to accept money through the Virgin website pays a one-off £180.

Another major player Everyclick levies a single 4.8 per cent ‘fees on donation’ charge while Golden Giving demands 2.8 per cent of the amount given. KindLink takes a 1.45 per cent cut plus 10p on any donation.

The most generous is the not-for-profit Wonderful.org. Thanks to financial support from The Co-operative Bank and other sponsors, every single penny you give goes to the charity.

A brand like Just Giving can attract a greater number of donations as people feel more comfortable paying into it thanks to its big name. The down side is the reduced donation total

Mark Watson, chief executive of charity website developer Fat Beehive, says: ‘If you look at how much money goes to the charity then it is no contest – Wonderful.org beats the competition hands down.

‘But the closure of MyDonate shows how vulnerable some of the less well-known charity donation websites can be. A brand like Just Giving can attract a greater number of donations as people feel more comfortable paying into it thanks to its big name. The down side is the reduced donation total.’

Anyone who makes a donation should ensure the good cause can reclaim the tax paid on it. By ticking the Gift Aid box you give the charity permission to reclaim the 20 per cent basic rate of income tax already paid on the money. This means a £10 donation gets topped up to £12.50. You do not see the money as it goes straight to the charity.

On top of this, you can also claim the 20 per cent difference between the 40 per cent higher and 20 per cent basic rate tax through a self-assessment tax return if you are a higher rate taxpayer earning more than £50,000 a year. This money can be pocketed or handed to the good cause. An initial £10 can end up being worth £15 (£12.50 plus £2.50 you reclaim from the taxman).

An additional rate taxpayer earning more than £150,000 a year pays 45 per cent income tax. By handing any rebate to charity the £10 is worth a total of £15.63 (£12.50 plus the £3.13 tax rebate). A majority of charity donation websites are signed up to a voluntary code of conduct issued by the Fundraising Regulator.

Read More   Do you live in one of the 50 best places in Britain, asks Halifax

This requires that they provide clear upfront details on charges and an independent complaints process for anyone who is not happy with the service they received. Further details can be found at fundraiser.org.uk.

Another way to support a favourite charity is through payroll giving. This method of helping a good cause – often known as ‘give as you earn’ – allows you to donate from your wages before tax. It means a basic rate taxpayer only needs to give 80p for the taxman to top it up to a £1 donation.

If your employer does not already offer this scheme, it is worth asking if it might be willing to start one up. Some companies will match your donation. If it is a local cause, your employer might be encouraged to offer financial support as it creates positive publicity and goodwill in the community. Charities like payroll giving as it provides them with a regular income that can help them plan ahead with good cause projects.

Marex set to to list on London stock market