The future in electric: When a Niti Aayog consultation meet got heated – DNA India


The meeting hall at Niti Aayog building in the national capital was jam-packed last month. Two- and three-wheeler industry stakeholders, including the original equipment manufacturers (OEMs), were among those invited by the government think-tank for the high-powered meeting. The agenda was to discuss the blueprint for the government’s plans to make three-wheelers and two-wheelers (up to 150cc) compulsorily electric by 2023 and 2025, respectively.

Minutes into the discussion, things started heating up as senior OEM executives noticed that though the government has already made up its mind about the deadline, there seemed to be no road map to reach there. The heated exchanges became fiercer after a senior executive of a Pune-based OEM expressed shock that there was no battery manufacturer present at a meeting meant to discuss EVs. The OEMs were unanimous in their opposition to the government’s plan to do away with internal combustion engine (ICE) in just a few years from now. They called it an ” illogical ” move that will lead to an irreparable loss to the Indian automotive industry.

However, the meeting ended on a sober note as the stakeholders agreed to meet two weeks later to discuss a further plan of action. Notably, the Pune-based OEM executive later expressed regret for getting aggressive in his arguments, a source said.

If you thought the ‘inharmonious’ meeting was just an aberration, you are mistaken. The debate is in line with similar attempts in other countries, including the US, Europe and China, where the legacy players and governments are blaming each other for the EV industry not taking off.

While the OEMs blame the government and bureaucracy for a lack of meaningful, consistent policies, many government officials feel that legacy players abhor change and will do it only when forced.

According to the industry insiders, the tension has been simmering since 2017 when the government began articulating a blanket plan to allow only electric vehicles to be manufactured and registered on the Indian roads from 2030. Union minister Nitin Gadkari, reportedly during an industry event in September the same year, threatened to “bull doze”, if the players go for petrol or diesel. “We should move towards alternative fuel… I am going to do this, whether you like it or not. And I am not going to ask you. I will bulldoze it. For pollution, for imports, my ideas are crystal clear… The government has a crystal-clear policy to reduce imports and curb pollution,” Gadkari said.

Since then, the vehicle manufacturers and their lobby bodies have held several meetings with the government at numerous fora. Almost all the OEMs operating in India, including the foreign ones, argue that there is almost zero infrastructure for EVs, and therefore the government should instead make green fuel technology-agnostic. Also, the OEMs said that it would not be prudent to kill the ICE market in which India has a competitive edge and which contributes 7% to the country’s GDP. The lobbying did help but to an extent. The government is now of the view that the “EV revolution” is possible initially in two- and three-wheelers and fleet business. It is expected to reach personal cars much later, and hence the push towards these two segments now, the ministry officials said.

However, the latest meeting at Niti Ayog has brought all the OEMs once again together in their fight. Contending that changing from conventional two-wheeler to 100% electric is “not like Aadhaar, not a software and print cards”, the companies said concerns of all stakeholders must be taken into consideration instead of imposing EV adoption. “This is not like Aadhaar, not a software and print cards. You have to set up a whole supply chain, and migrate from the current supply chain,” one of the OEM executives said during the meeting with Niti Aayog. Concurring, Hero MotoCorp executives said they are “deeply concerned” by the potential repercussions of Niti Aayog’s approach of completely banning two-wheelers of up to 150cc that are powered by ICE. Bajaj Auto managing director Rajiv Bajaj said that the 100% transition from ICE is completely uncalled for. Earlier, he had said that the move was impractical and ill-timed, considering the scale involved when stakeholders do not have “any meaningful experience with any of the pieces of the EV puzzle” and that too a date so close to BS VI implementation.

Tata Sons chairman N Chandrasekaran joined his industry counterparts, saying that the migration to EVs needs to be planned to ensure the entire ecosystem is ready through a multi-year road map, echoing the views of industry leaders who have called for a calibrated approach towards electric mobility. “The migration to EV is important in our journey for sustainable mobility. But it needs to be planned to ensure that we have the entire ecosystem ready,” Chandrasekaran said in a statement. He said, “What the government and industry must do is build a multi-year road map together, with milestones that could help all the players understand shared objectives, build capabilities and infrastructure and minimise any surprises along the way.”

Rajan Wadhera, president, of Society of Indian Automobile Manufacturers (SIAM) said the automotive industry fully supports an ambitious aspiration of the Niti Aayog in bringing in electric mobility in the country as soon as possible. “India is an aspiring nation and keen not only to catch up with the world but to go beyond in the field of EVs. However, the ambition needs to be tempered with a practical approach and what is possible without needlessly disrupting the automotive industry,” he said.

In the past, manufacturers such as Mercedes-Benz, Toyota and others had called for an EV policy outlining long-term perspective, framework and parameters, under which they could sell such eco-friendly vehicles. They have also argued that hybrid technology must also be considered and supported for the transition from conventional internal combustion engines to full EVs. Maruti Suzuki had said earlier that EVs are for the long term, and in the short to medium term, alternate fuel technologies such as CNG must be supported.

While the industry protests, a government source said they are working on policies so as to discourage the manufacturing and sales of vehicles fitted with ICE. “We are trying to learn how other countries went about it,” said a senior government official, as the aim is to fix target by regulating the emission level and fuel efficiency for OEMs. One of the options being worked out is to regulate emission level for each vehicle and allow the manufacturers to maintain the flexibility between ICE and electric vehicles in their portfolios. The stricter regulations always come at a cost to OEMs, which they pass on to the end-consumers, making the vehicles expensive. 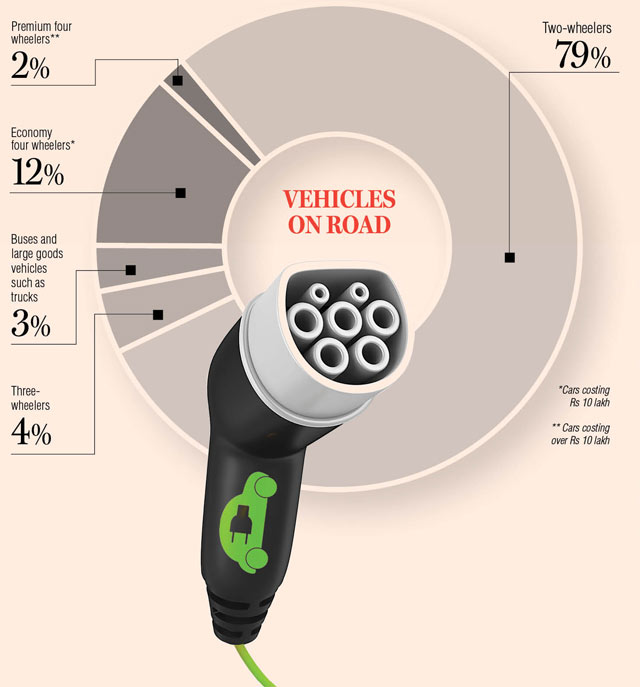 When do state disrupt industries?

A research paper released at MIT Center for Energy and Environment Policy Research by Jonas Meckling and Jonas Nahm in March 2017 has attempted to answer the role of the state in pushing the EV policies. The research titled ‘When do states disrupt industries?’ analyses how the state structure determines the ability of governments to drive technological change. The article argues that in mature industries, systems of interest intermediation shape the state’s capacity for sectoral intervention. In corporatist developmental states, industry and government coordinate technological transformations in consensus-driven negotiations. Such coordination prioritises the interests of incumbent firms, resulting in weak policy intervention. In pluralist developmental states, competition among interest groups and state agencies allows policymakers to organise coalitions of technology challengers in support of technological change, leading to strong policy intervention. Focusing its study on two major automobile markets, the report said, “While Germany failed to disrupt its auto industry, the US adopted a comprehensive policy for the manufacturing and commercialisation of electric cars.” the report said.

The compulsion for green mobility

India, which is home to 14 out of 20 most polluted cities globally, has committed to cutting its greenhouse gas emissions intensity by 33% to 35% below 2005 levels by 2030. A report prepared by Niti Ayog claims that while vehicle growth in India is rapid, ownership per 1,000 people has increased from 53 in 2001 to 167 in 2015 a key difference between India and other countries and the types of vehicles being used.

The Niti Aayog reports said that beyond reducing battery costs, India can explore fiscal support for EVs. The standard approach in other countries to providing fiscal support to EVs has been direct subsidisation. For example, EVs in the US, Europe and China have up to 40% “all-in” subsidies. Those subsidies include direct central or state subsidy to buyers, mandates to manufacturers, utility subsidies or subsidy in the form of rebates where vehicles are taxed based on their CO2 emissions, whereas EV receives support. As costs decline and the share of EVs increases, most nations plan to taper off such subsidies.

For India, however, those paths are not viable, the report said. The elimination of direct subsidy will be the policy basis. Direct financial demand-incentives / subsidies could be replaced by tradeable auto-emission coupons or credits based on CO2 emissions per km as well as on a sliding scale for vehicle efficiency. This will encourage the market to build efficient vehicles with lower emissions per km. Thus, while vehicle manufacturers exceeding CO2 emissions targets would have to purchase coupons or credits, the manufacturers meeting the targets would be rewarded with coupons. The market will decide the prices of these coupons. This will incentivise EVs and low-emission vehicles as well as energy-efficient vehicles at the expense of the vehicles with high emissions and lower-efficiency. ” We hope the due process brings out the best of ideas of the EV policy implementation. But yes, then implementation remains the key,” a senior government official said.

The Case For EVs