The moon would look brighter than the SUN if the human eye could see cosmic rays: Incredible NASA images taken with a gamma ray telescope transform it into a fiery ball

By Tim Collins For Mailonline

If our eyes could see high-energy radiation called gamma rays the moon would appear brighter than the sun, experts have revealed.

NASA‘s Fermi telescope has been studying our neighbour in space for the past decade, examining bursts of particles caused by the impact of cosmic rays.

These fast moving particles, which originate outside our solar system, impact on the surface of the moon regularly as our natural satellite has no magnetic shield.

Now, the space agency has release images and animated footage of the gamma rays that are produced when these cosmic rays hit the moon. 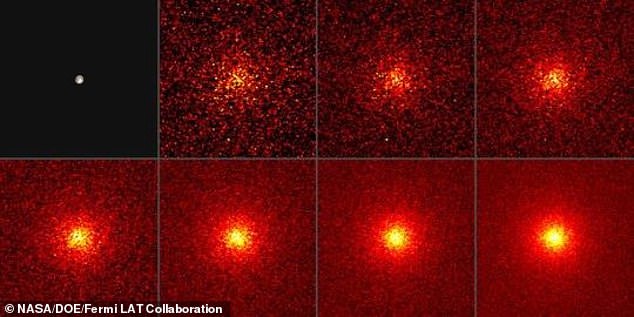 If our eyes could see high-energy radiation called gamma rays the moon would appear brighter than the sun, experts have revealed. NASA’s Fermi telescope has been studying our neighbour in space for the past decade for signs of these particles (pictured)

They rounded up data for gamma rays with energies above 31 million electron volts – more than 10 million times greater than the energy of visible light.

They then organised them over time, showing how longer exposure times over the course of the mission have improved our view of the phenomenon.

‘Seen at these energies, the moon would never go through its monthly cycle of phases and would always look full,’ said Francesco Loparco, ho has been studying the data.

Because the particles in cosmic rays are electrically charged, they’re strongly affected by magnetic fields, which the moon lacks.

As a result, even low-energy cosmic rays can reach the surface, turning the moon into a handy space-based particle detector.

When cosmic rays strike, they interact with the powdery surface of the moon, called the regolith, to produce gamma-ray emission.

The moon absorbs most of these gamma rays, but some of them escape.

‘Cosmic rays are mostly protons accelerated by some of the most energetic phenomena in the universe, said researcher Mario Nicola Mazziotta.

‘That includes the blast waves of exploding stars and jets produced when matter falls into black holes.’ 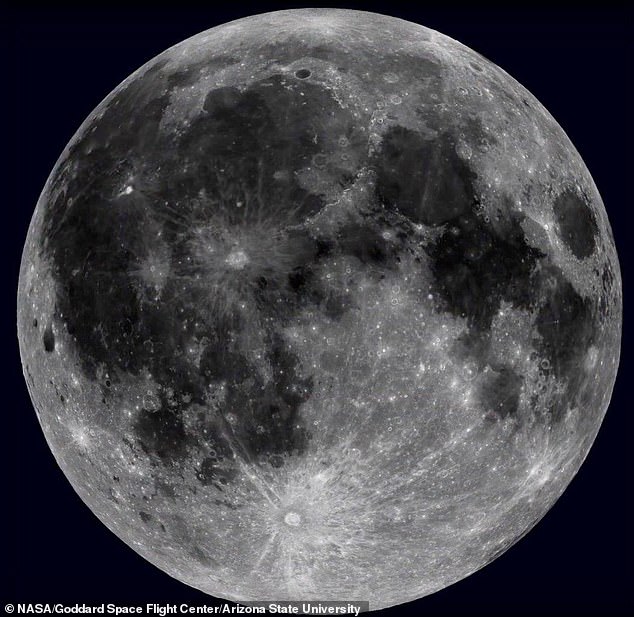 Scientists have been analysing this gamma-ray glow to try and better understand cosmic rays, fast moving particles that originate outside our solar system. They impact on the surface of the moon regularly as, unlike the Earth, our natural satellite has no magnetic shield to protect it 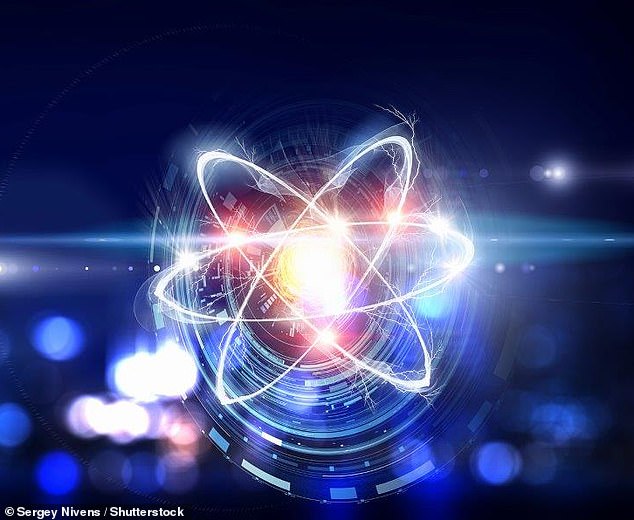 Gamma rays are a form of electromagnetic radiation, similar to X-rays, that are emitted from the excited nucleus of an atom (artist’s impression)

NASA has set its sights on sending humans back to the moon by 2024 through the Artemis program, with the eventual goal of sending astronauts to Mars,.

These gamma-ray observations are a reminder that astronauts on the moon will require protection from the same cosmic rays that produce this high-energy gamma radiation.

While the moon’s gamma-ray glow is surprising and impressive, the sun does shine brighter in gamma rays – with energies higher than one billion electron volts.

Cosmic rays with lower energies do not reach the sun because its powerful magnetic field screens them out.

Much more energetic cosmic rays can penetrate this magnetic shield, however, and strike the sun’s denser atmosphere – producing gamma rays that can reach Fermi.

Although the gamma-ray moon doesn’t show a monthly cycle of phases, its brightness does change over time.

Fermi data show that the moon’s brightness varies by about 20 per cent over the sun’s 11-year activity cycle.

Variations in the intensity of the sun’s magnetic field during the cycle change the rate of cosmic rays reaching the moon, altering the production of gamma rays.

WHAT DO WE KNOW ABOUT GAMMA RADIATION?

Gamma rays are a form of electromagnetic radiation (EMR), similar to X-rays, that are emitted from the excited nucleus of an atom.

All EMR takes the form of a stream of photons, massless particles each travelling in a wave-like pattern and moving at the speed of light.

Each photon contains a certain amount – a package or bundle – of energy, and all EMR consists of these photons.

Gamma-ray photons have the highest energy in the EMR spectrum and their waves have the shortest wavelength.

For comparison, the ultraviolet radiation that causes your skin to tan or burn has energy that falls in the range from a few electron volts to about 100 eV.

The high energy of gamma rays mean they can pass through many kinds of materials, including human tissue.

Very dense materials, such as lead, are commonly used as shielding to slow or stop gamma rays.

Gamma radiation is released from many of the radioisotopes found in the natural radiation decay series of uranium, thorium and actinium.

It also emitted by the naturally occurring radioisotopes potassium-40 and carbon-14.

These are found in all rocks and soil and even in our food and water.

Huge bursts of gamma rays have been detected out in the universe and are though to come from black holes that form when stars explode or when two neutron stars collide.