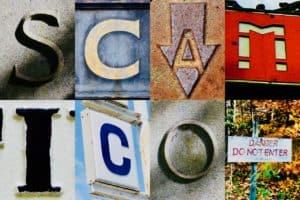 According to the SEC, Grybniak and his company raised $600,000 from around 200 investors during the sale of unregistered “digital asset securities” called “OPP Tokens.”

The SEC states that Grybniak claimed the ICO was “SEC Compliant.”

The ICO was conducted from September 2017 to October 2018. The line in the sand DAO Report published by the SEC was released in July 2017.

Grybniak reportedly pitched Opporty’s platform as a place where small businesses could list their services and products, and apparently use blockchain smart contracts to enter into agreements with customers using OPP Tokens. Grybniak sold the tokens using a SAFT (Simple Agreement for Future Tokens) agreement.

The SEC’s complaint also alleges that Grybniak and Opporty engaged in “other deceptive acts, including misappropriating third-party content without approval or attribution, to create the false impression that actual users of Opporty’s platform had created such content.”

The SEC’s complaint charges Grybniak and Opporty with violating the antifraud laws.

The SEC seeks permanent injunctions, conduct-based injunctions prohibiting the offering of digital or other securities, disgorgement plus interest, and civil penalties against Grybniak and Opporty, as well as an officer-and-director bar against Grybniak. The complaint also names Clever Solution Inc., another entity controlled by Grybniak, as a relief defendant.

This is just the latest target of an SEC enforcement action for a post-DAO ICO that raised funding from US citizens.

Cardano Seems to have Freeze Around $0.0489 Price – NameCoinNews

4D Investments Finland launches DINT token with an aim to build a decentralized platform that does not require owning any crypto – Press Release...

Why did Amazon spend $1.5m in Seattle’s local elections? – The Guardian

What Is an ICO? | An Explanation of Initial Coin Offerings – CoinCentral