There are three big things in the market's way, but Goldman has found stocks that will win anyway

But the firm found stocks of companies whose margins are insulated these pressures and should be bought by clients. They include Coca-Cola and Adobe.

The third quarter has been strong for the majority of the 381 S&P 500 components that have already reported results, with nearly 78 percent posting positive earnings surprises. The blended earnings growth rate for the S&P 500 is 24.9 percent, with the broad market index on track for its second-highest earnings growth since the third quarter of 2010, according to FactSet. 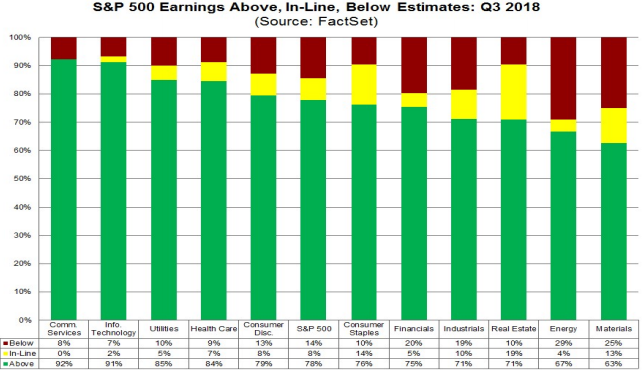 But despite the rosy third-quarter reports, financial markets have been dropping largely because of these three worries pointed out by Goldman Sachs.

“The actual impact of tariffs on third-quarter results was minimal because implementation of the 10 percent levy on $200 billion of imports from China only started on Sept 24.,” Kostin wrote. “However, the tariff rate is slated to jump to 25 percent starting in January 2019 and an additional $267 billion of imports may be subjected to a 25 percent tariff.”

President Donald Trump threatened to slap sanctions on the rest of the goods imported from China — which exceed $257 billion — if Beijing fails to bow to Washington’s demands for an overhaul to their trade agreement as well as changes to China’s technology transfer policy.

The White House has already imposed tariffs on $250 billion worth of Chinese goods, and Beijing has responded in kind with retaliatory duties on $110 billion worth of U.S. goods. That, in turn, has buoyed costs for American companies that do business in China or source

Most managers expect to reduce the negative impact of tariffs through price increases, Kostin noted, with industrial giants including Illinois Tool Works and United Technologies assuring shareholders that any levies affecting their business will ultimately be passed on to their buyers.

“I would expect pricing will also have to increase next year if these tariffs remain in place,” Hayes said on United’s earnings call last month. “Ultimately these tariffs, it all gets passed onto the consumer in one form or another. It’s just a tax on the consumer in another way to think about it.”

Goldman said that companies are also concerned about a tight labor market and implications for wages.

The government’s most recent update on the employment situation showed the U.S. economy added a strong 250,000 jobs in October and a 3.1 percent year-over-year rise in average hourly earnings. The closely watched unemployment rate held steady at a multidecade low of 3.7 percent.

That’s likely to bode poorly for corporate profits, which should see a dent if management is forced to compete to fill vacate positions or to dissuade workers from pursuing better-paying jobs elsewhere.

“Wages are 60 percent of corporate costs so it’s not just an input cost: it’s by far the most important one,” Citigroup chief equity strategist Tobias Levkovich told CNBC on Friday. Some leading indicators are suggesting we “going to be talking about 3.5 percent, 3.6 percent wage increases in the first quarter of 2019. That, I think, the bond market will have to address and the Fed will have to address.”

Darden Restaurants, for example, observed that “Restaurant labor was unfavorable 70 basis points, despite continued productivity gains and sales leverage. The increase was driven by hourly wage inflation of approximately 5 percent,” according to Goldman’s transcript of the Darden call . Meanwhile J.B. Hunt Transport said that “probably in the next 12 to 18 months, our driver wages are up about 10 percent or a little but more than that,” according to Goldman.

Finally, higher interest rates will put pressure on margins both as the Federal Reserve hikes its overnight rate and as more bond traders adjust their inflation estimates.

Which Lloyds and Halifax Bank branches are closing? See the full list

Goodbye V6 : 6-cylinder engines on their way out in most cars